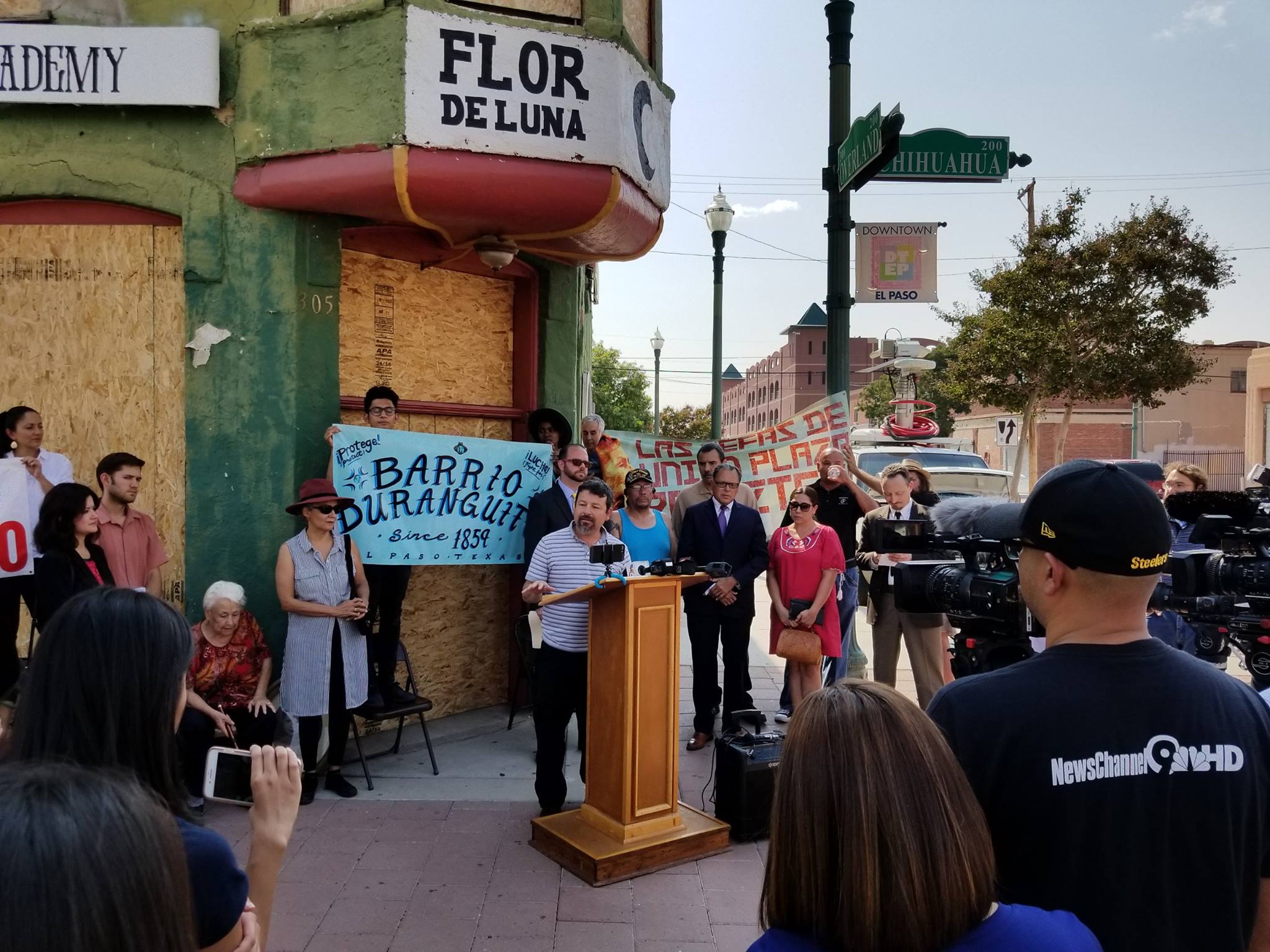 A long-simmering controversy over a planned arena in downtown El Paso that would displace a historic neighborhood and its residents erupted into a confrontation between the community and a contractor hired by property owners earlier this month.

Residents and their allies protested when contractors drove a bulldozer through the the Duranguito neighborhood and began demolishing several buildings. The contractor violated an emergency relief order to suspend all permits authorizing the demolition of properties there, as well as the city’s effort to remove residents from the area.

The issue represents two competing views for the future of El Paso. One which values the rights of low-income residents to stay in their own neighborhood and the other a city council-inspired vision to revitalize a downtown built around a new multi-purpose arena, which voters supported in a bond election in 2012.

Duranguito is a cultural center in this historic border community. Extending from the central business district to the main bridge crossing into Juarez, S. El Paso St. is lined with small stores. The surrounding neighborhoods are filled with historic tenements and public housing developments that are one of the most important sources of affordable housing in the city. Banking and civic leaders have long pursued a revitalization plan that would move out the businesses which cater to Mexican residents who cross the bridge daily to shop in the stores and replace it with a western-themed tourist hub of restaurants and boutiques.

Community activism has a long and strong tradition in the neighborhood and has successfully resisted past efforts by city leaders to advance this plan utilizing federal funds. The power dynamic began to shift with the bond election five years ago which made funds available for the construction of what was billed at the time as a cultural center. However, once the bonds were passed, the “cultural center,” public officials re-envisioned the project as a sports arena. Texas RioGrande Legal Aid represented local residents in court to challenge this change and won. But the city intends to challenge that decision from an Austin court.

A series of contradictory court decisions led to an order temporarily blocking the demolition of local businesses and homes that had been acquired to be torn down for the public facility. When that order was lifted city officials swung into action to quickly bring in the bulldozers to demolish the historic structures. Community residents appealed, resulting in the court reinstating the demolition order. Residents came out into the streets to seek to block the bulldozers from the demolition but the contractors refused to halt the destruction which led to a contentious confrontation with chanting demonstrators on one side and a bulldozer on the other.

State Senator Jose Rodriguez, TRLA attorneys representing residents, and other advocates tried to explain the court order to police and the contractors as the tension grew. Video footage on Facebook shows frustration as police officials contend that the order does not apply to the properties contractors intended to demolish.

Local advocates note that the city’s plans will depend upon the use of public funds from both the city and the federal government in order to carry out the demolition and repurposing of this neighborhood of affordable housing into the new tourist center.

The fight is not over, though. Duranguito advocates continue to make their voices heard in city council chambers and are pushing city officials to make the process of building the arena and preserving their neighborhood. Many in the neighborhood are trying to develop an alternative plan that helps downtown El Paso development respect the history and people who have called the area home for generations — to keep its Mexicanness, as State Sen. Rodriguez described to Texas Monthly.

“To capture what El Paso really is, you need to accept the Mexicanness, the Mexican American, and indigenous roots of El Paso,” Rodriguez told Texas Monthly. “There’s too many people who say, ‘I want us to move away from that. I want us to be like Gringolandia, like all the other homogenized American cities.’ El Paso is unique. You can’t find a place like this anywhere.”