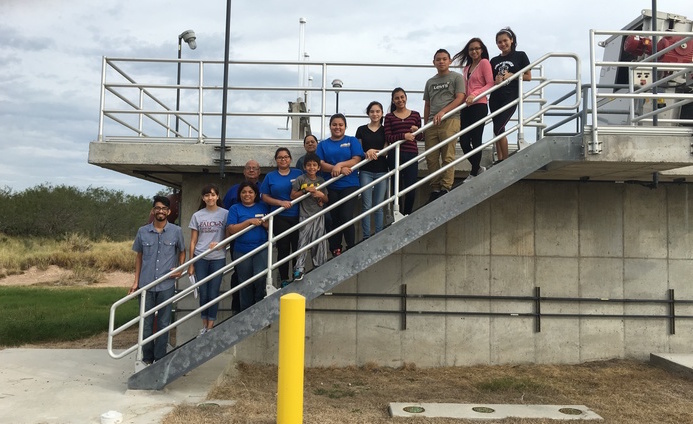 Above: Leaders of the South Tower Power campaign at the City of Alamo Wastewater Treatment Plant.

A Rio Grande Valley community is one step closer in their search for relief from a noxious smell produced by a City of Alamo wastewater treatment plant.

Residents of the South Tower, a community that includes several colonias, were granted a contested hearing this week against the City of Alamo, which is seeking a five-year permit renewal for its wastewater treatment plant. The city contends that it should be able to renew its permit while it considers solutions. (Alamo received $1 million last year from the Texas Water Development Board for the design and development of a new plant.)  The youth and residents think the city should not delay solutions any longer.

This comes after more than a year of youth-led advocacy efforts and a state public hearing to address the odor nuisance caused by the open lagoon sewer treatment plant. The group of young environmental justice advocates, Jóvenes del Valle en Acción, worked with partners at A Resource In Serving Equality (ARISE) and Texas Low Income Housing Information Service.

For more than a year, residents of South Tower have tried to get the city of Alamo to rectify the environmental injustice caused by this plant. The South Tower neighborhood, which is right next door to the plant, is not served by it. Yet, residents there must endure the foul stench.

“It’s waste, but whenever it starts to smell, it’s really unpleasant” said one of the teen advocates, Abril Cossino. “Some days when the panels are not working with the waste plant, your nose just starts to cringe a little. It starts to burn a little bit when it’s really, really, really bad.”

The grassroots youth group mobilized their community through canvassing and community education events. Residents then formed a separate group called Aire Limipo Para South Tower. The group sought legal representation from Texas RioGrande Legal Aid, which requested a contested hearing to keep the city of Alamo from renewing the wastewater treatment plant permit, and urging them to instead find an alternative solution for the plant and stop the noxious smell.

“I never imagined myself talking to important people like in the City of Alamo or the commission but it was something I needed to learn to do in order to actually make the change in my community,” another teen advocate, Andrea Guzman said. “I needed to learn to speak up and be brave.”

The hearing date has not been set yet, but, the TCEQ officials following the hearing this week indicated that part of the contested case will be in the Rio Grande Valley so that stakeholders are able to attend. A contested case hearing is a legal proceeding similar to a civil trial in state district court. Residents will be represented in a hearing, while the City of Alamo has its own counsel.

“It started with research and then TCEQ came in to teach us…” Cossino said. “We started to inform the community. We said we’re not going to let this happen, and we started planning our campaign. We’re really proud that we as teenagers embarked on this journey.”