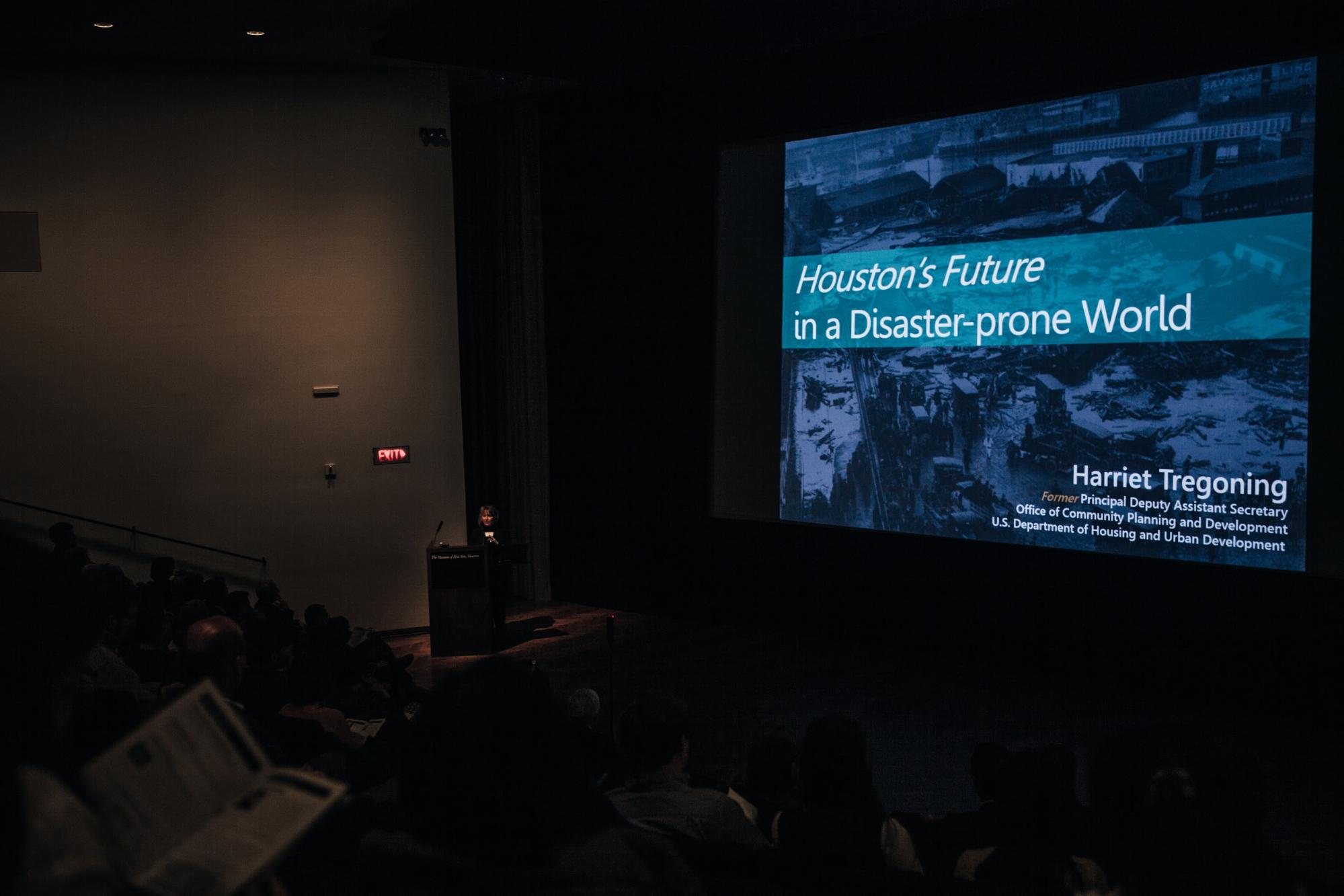 In the wake of Hurricane Harvey, Houston has an opportunity to leverage its unique characteristics to build not only a more resilient, but competitive city.

“It’s not about the disaster, but where you want to be,” says former HUD executive, Harriet Tregoning.

Houston is infamous for its lack of zoning. Tregoning, however, views this flexibility in land use as an opportunity; that in tandem with the city’s high level of engagement and “engineering chops,” could allow for a recovery that focuses on “using physical planning and investment to win the economy.”

On Wednesday evening, about 200 attendees took their seats the Brown Auditorium Theater at the Museum of Fine Arts Houston. The Kinder Institute Forum series had invited Tregoning to speak on “Houston’s Future in a Disaster-prone World.” She was the Principal Deputy Assistant Secretary of the Office of Community Planning and Development at HUD where she helped local jurisdictions across the country build a strong foundation for resilience in the face of a changing climate, and for a diverse and prosperous economy based on enhancing community quality of place, economic opportunity, fiscal stability, transportation choice, and affordability. Six months after Hurricane Harvey dumped over 50 inches of rain and inundated a third of the Houston metro area, certain communities are still struggling to recover. Her goal, she stated was to deepen the understanding of what resilience means, and how it can – and cannot – be achieved.

Tregoning began her presentation by addressing the state of affairs after the 2017 hurricane season, which boasted three of the five costliest hurricanes: Harvey, Irma, and Maria. Coastal communities, which have six times the population density of inland communities, face an enormous concentration of risk. These risks are only exacerbated by climate change.

To make things worse, there is a serious lack of knowledge of the risk of flooding in Houston. Tregoning told the audience of how shocked she was by how many homeowners would tell her, “I had no idea I was in a floodplain.” Of the homes affected by the floodwaters, only 13 percent had flood insurance. “Put another way,” offered Tregoning with a dry wit, “83 percent did not…” “So,” she continued, “What does Houston need to do? What does Houston need to know?”

For starters, we need to be better informed, and use better maps. According to Tregoning, the average age of FEMA flood maps in certain areas is 10 years old without an update. In others, however, it can be up to 30 years. The flood maps used by FEMA, she said, “are doing more harm than good,” as they are based on past events: “They tell us what happened…but not what will happen.” To better understand how the city can respond to future storms, there is a need for multiple variable predictive models that take into account our dynamic ecosystems. With such information, we can determine small, simple, yet informed solutions to buy communities more time in the event of a flooding emergency. We must also be adaptable and, Tregoning remarked soberly, decide from where we choose to retreat, making the hard call of what is no longer worth saving.

Recalling her $1 billion National Disaster Resilience Competition with HUD, Tregoning stated the goal is “approaching disasters in a different way…to take a different look at the problem.” Resilience demands “a different approach at every level,” requiring the participation of not just government bodies, but university partners, civil society, and the nonprofit community. Neither, she emphasized is this simply a job for engineers and big infrastructure projects. “You all here in Houston have a lot of engineering chops, but…you don’t really seem to like regulation,” to which the entire audience chuckled knowingly. “This is not a matter of engineering versus regulation…we’re braiding a rope here.”

Houston, Tregoning believes, has all of the tools it needs to engage in such resiliency, applauding innovative design models such as the Bayou Greenways and their Beyond the Bayous projects, as well as METRO’s Bus Rapid Transit pilot. She finished her presentation with her favorite quotation by William Gibson, “The future has already arrived. It’s just not evenly distributed yet,” to which she followed “I’ve seen this in Houston.” Despite the city’s apprehension to regulate, there is a wealth of engagement, resources, philanthropy, and a “lofty set of aspirations.”

After the presentation, in response to questions posed by audience members, Tregoning insisted on the need for floodplain disclosure requirements to homeowners, even if it makes things harder. “It is unconscionable that people wouldn’t know.”

Responding to a question concerning underserved neighborhoods and equity, a topic Tregoning stated “concerns [her] enormously,” she voiced a fear of “new redlining” in the wake of disaster, and recommended using public land and retrofitting existing public buildings to create new, safe affordable housing. The flexibility of land use regulations presents itself here as an opportunity. Moreover, she voiced a need for a registry to keep track of renters and address their needs in the wake of disasters, reaching out to them via text or another innovative approach. “A lot of people,” she said very seriously, “just disappear.” When asked how Houston can innovate in its creation of affordable multifamily housing, Tregoning honed in on the importance of where to find the land and how to use the money, answering her own question stating, “we put [the money] where we wish it could have been.”

The final question asked how citizens can take part in creating a more resilient Houston, and maintain a sense of urgency.

While urgency is important to maintain attention, she said, it can also be your enemy. Purposefulness, she offered, is most important. After all, with a hurricane season that comes every year, “you have an endless sense of urgency.” With regard to citizen participation, she went on, “You have the agency to have a meeting, to hold a workshop.” Tregoning encouraged those in government and public service to reach across agencies, and sectors in the search of allies and collaborators: “It turns out, you have a colleague in every agency…it’s your job to find them…you can change the culture from the bottom.” With this kind of collaboration, engagement, and coordination, “This recovery,” she finished, “could be so very different from those of the past.”