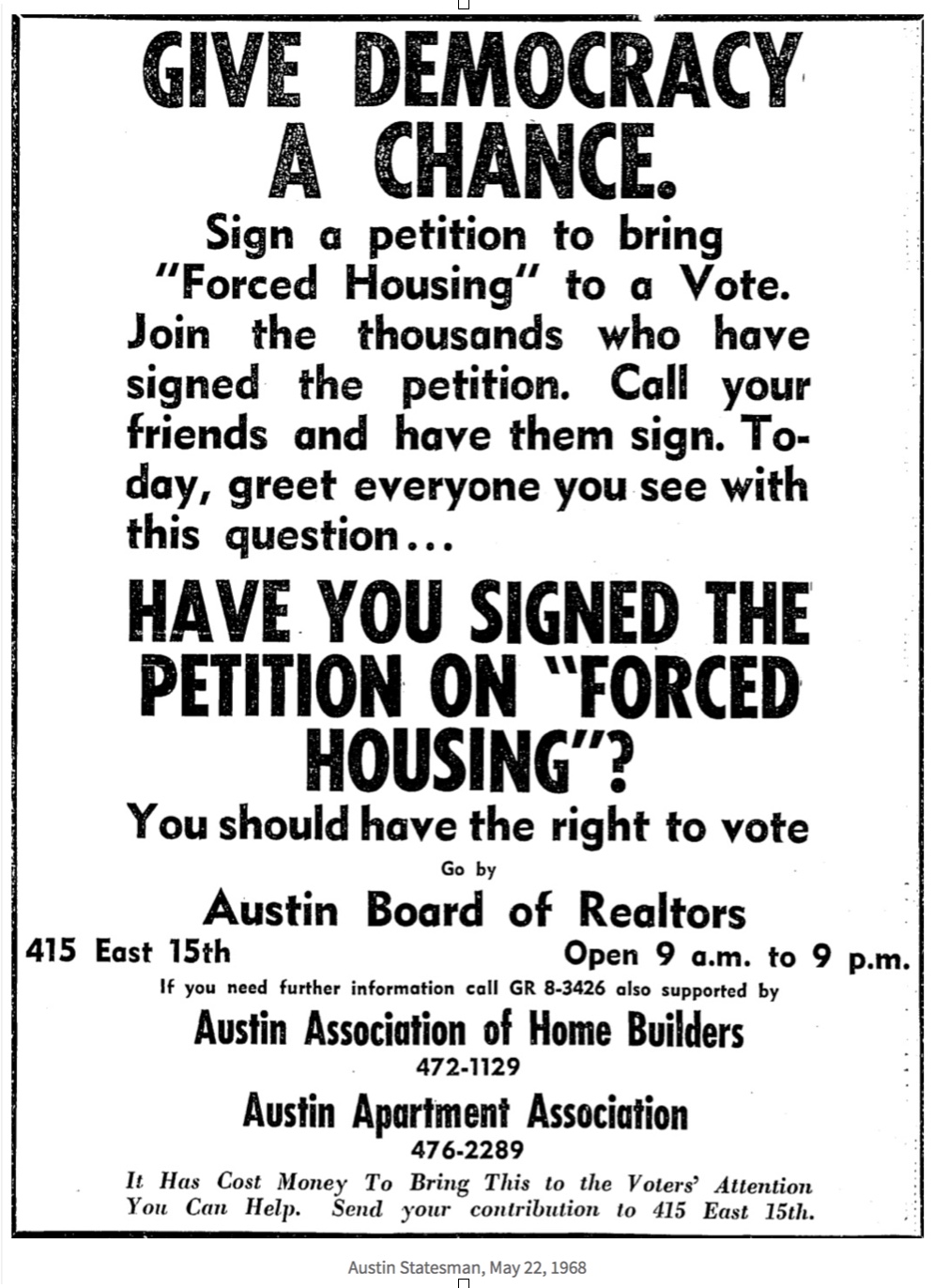 The right to fair housing stands out among civil rights laws as the one that has historically received the most bitter, sustained, post enactment resistance. Civil rights and fair housing attorney Micheal Allen laid out the case that HUD is failing in its mission to enforce the Fair Housing Act in a speech at the Austin 50th Anniversary Fair Housing event yesterday.  Austin’s illustrates the widespread experience of active local resistance to the enactment of fair housing over the past fifty years.

Together, HUD’s failure to do its job to enforce fair housing coupled with virulent, ongoing local resistance to residential racial integration, account for the ongoing segregation in the United States.

In his brilliant new book, The Color of Law, Richard Rothstein demonstrates that residential racial segregation is the creation of every level of government. The City of Austin’s most infamous contribution was the city’s 1928 master plan, through which the city deliberately set about to complete the segregation of its people.  Abetted by state and federal government policies detailed by Rothstein, the Austin reached a level of hyper segregation. In the wake of demands of the civil rights movement, and led by the Johnson Administration’s embrace of civil rights, the liberal political class in Austin began to consider undoing the 1928 plan. Three liberal city council members were working on a local fair housing law at the time Congress passed and President Johnson signed the Fair Housing Act on April 11, 1968.

Quickly recalibrating, the city council members proposed to pass a local “substantially equivalent” fair housing ordnance. This was both substance and symbolism. It was substance because it meant that acts of discrimination could be investigated locally and presumedly more expeditiously. But it was also important that the city formally repudiate the shameful racism and discrimination it had inflicted upon the African-American community through forty years of de jure residential segregation through the 1928 plan. The nation was coming to account for discrimination and Austin progressive leaders wanted to get right as well.

One month after enactment of the federal Fair Housing Act, on May 17, 1968, Austin became the first city in the Southwest to attempt to enact a fair housing ordinance.

These opponents ran an effective organized public campaign against fair housing in the community and the media. Below are examples of the tenor of the discussion leading up to the referendum.

Opponents from the Austin Board of Realtors, the Association of Home Builders, and the Austin Apartment Association ran newspaper ads relabeling fair housing, “Forced Housing.”

An ad proclaimed, “DID YOU EVER HEAR OF A WOLF IN SHEEP’S CLOTHING?” By 1968 plain expressions of race prejudice, while still effective at the street level, were often masked in appeals like this demand the protection of  (white) people’s individual freedom and rights to racially discriminate. The industry also employed the specter of other white fears. For instance, in the fine print, this ad accuses supporters of fair housing of being communists.

The voter referendum on Oct. 19 1968 competed with the University of Texas – Arkansas football game (which attracted more than the election). Nevertheless, the voters soundly rejected fair housing. When the three liberal council supporters stood for re-election the next year, they were each defeated at the polls by conservative, anti-fair housing candidates.

The defeat of the fair housing ordnance and the subsequent removal from city council of the ordnance’s supporters was a heavy blow to both civil rights and white liberalism in Austin. It was not until a decade later that the city council took up fair housing again, now expanded from five to seven members and with one African-American and one Hispanic council member. The new city council adopted a substantially equivalent fair housing ordinance in 1977. And once again, the fair housing law brought controversy.

Renewed opposition came from the same forces who defeated fair housing in 1968. Backers of the new ordnance proposed to add additional protected classes of persons to the law who were not included in the 1968 federal Fair Housing Act. The expanded protected classes were student, marital status, age and sexual orientation. While still opposed to fair housing for anyone, realtor and property manager, Nelson Puett, seized on prejudice against gays and lesbians to drum up opposition to the new ordnance.

There were more active and organized supporters of fair housing this time however, especially from the gay community. The photo below shows the Austin city council chambers filled to overflowing, with many supporters sitting on folding chairs in the parking lot. The article explains, “The proposed fair housing ordinance brought more people to the Austin city council Thursday night than MoPac (a controversial new proposed expressway), gun control, or dog ordinances ever did, and the heavily pro ordinance crowd dominated the microphones and gave more standing ovations than the council chambers have seen in years.” Loudspeakers were set up for the people outside. More than 80 people spoke.

Charles Miles wrote, “… I find it interesting that most of the opposition are the very same people who are so vocal in their opposition to the open housing ordinance in 1969. This time they are saying they oppose the section on sexual orientation, of course, in 1969, it was us [African-Americans].  I think to a large extent, it is still us, but the gays are a better target. Frankly, rather than eliminate the section of sexual orientation, I would rather see the whole ordinance voted down. I don’t think we should accept white folks charity at the expense of the rights of other people who are entitled to their rights, too.

The Austin Human Relations Commission, the city’s long time advocate for fair housing) did not give up however. In 1979, they commissioned a study called the Austin Housing Patterns Study, which was conducted by John Henneberger (now Texas Housers co-director), and Susana Almanza (now a well known community activist).  This study made sweeping recommendations for overcoming residential segregation, expanding protected classes under fair housing law and addressing inequality between white, black and brown neighborhoods in the city and was hugely controversial in its own right.

After several public hearings, the city council went directly to the voters with a ballot set for January 1982. The ballot was worded so that a yes vote would allow discrimination on the basis of sexual orientation. The Austin Apartment Association worked strongly to urge voters to reject fair housing.

Voters rejected the ballot amendment to the city fair housing ordinance to legalize discrimination against gay people in housing by 67%. Steven Hotze led the most vocal organized effort to allow discrimination. Although rebuffed by Austin voters, Hotze went on to lead a 2015 citizen referendum to repeal Houston’s Equal Rights Ordinance, the forerunner of the so-called State of Texas bathroom bill.

In 2014, the Austin city council revisited fair housing and unanimously voted to outlaw discrimination against persons who pay rent with a housing voucher, also known as “source of income discrimination.” In this fight, the Board of Realtors was neutral. The Austin Apartment Association was the lead opponent, sued the city in federal court and lost, but prevailed upon the ultra conservative Texas state legislature to preempt the right of Texas cities to enact such a fair housing ordnance. The Legislature’s action nullified the city’s expanded fair housing ordinance, except curiously, leaving in place the city’s protection of veterans from source of income discrimination.

Today, as Micheal Allen has described, HUD Secretary Ben Carson is removing the words inclusive and free from discrimination from HUD’s mission. While the administration maintains that the changes are not insignificant, a story in last Thursday’s New York Times concludes, “ The Trump administration is attempting to scale back federal efforts to enforce fair housing laws, freezing enforcement actions against local governments and businesses, including Facebook, while sidelining officials who have aggressively pursued civil rights cases.”

What is apparent is that the right to fair housing stands out among the civil rights laws as the one that has historically received the most bitter post enactment resistance. While this plays out differently in cities across the US, Austin’s historical experience is not unusual. There has been active resistance to the enactment of fair housing laws over the past fifty years.

Together with HUD’s failure to do its job enforcing fair housing, the virulent and ongoing local resistance to residential racial integration, account for the ongoing segregation in the United States and demands the continued attention of those of us who believe in civil rights.