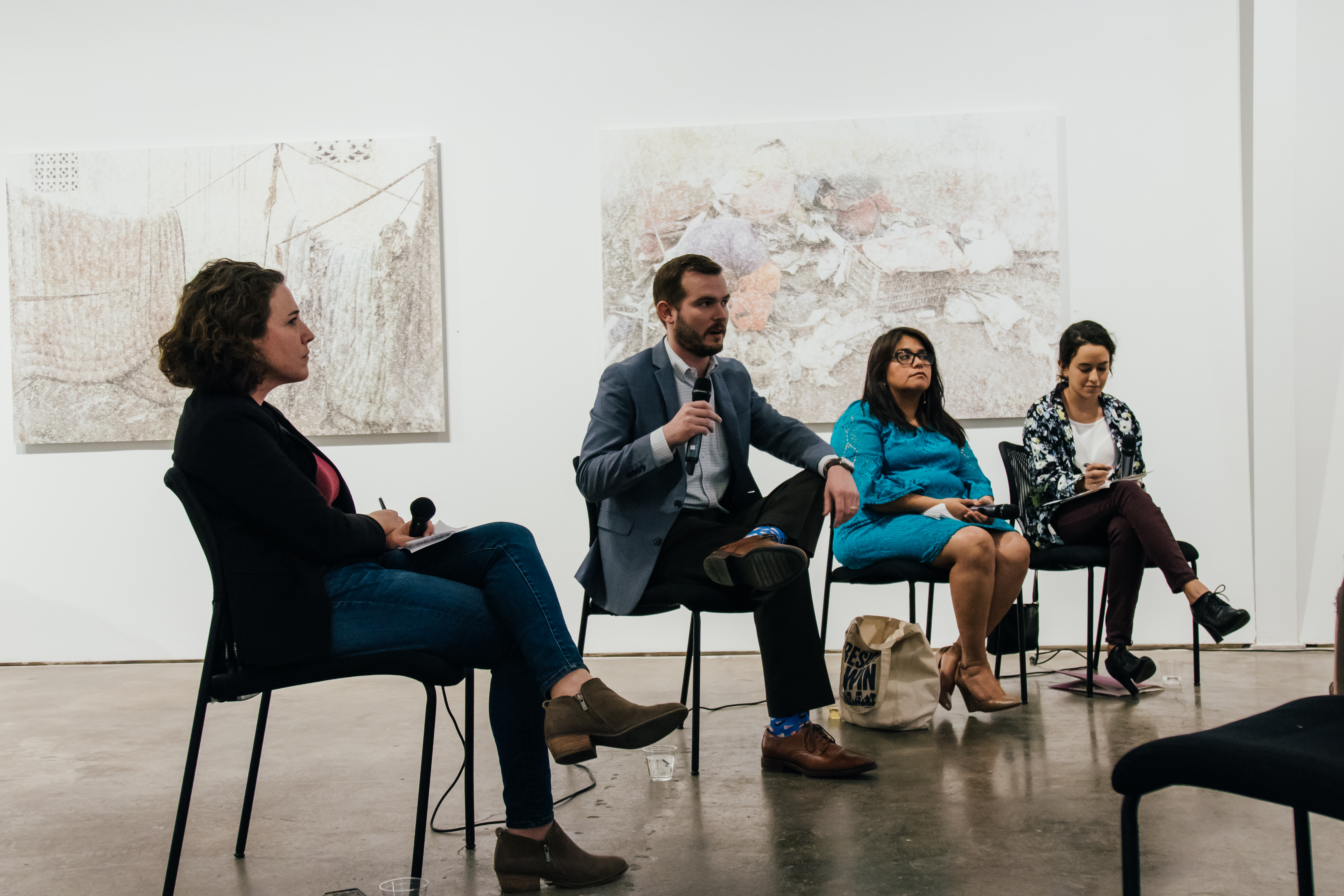 Hurricane Harvey “pulled back the curtain” on inequality in Houston, revealing some “scary truths about the city we are living in,” said Ginny Goldman last week as she moderated a panel discussion at the Deborah Colton Gallery in the wealthy Boulevard Oaks Neighborhood.

In conjunction with the panel was artist Molly Gochman’s exhibit, “Drenched,” which examines life in the aftermath of flood disasters featuring photos of damaged belongings in both Houston and India. The series, as described by the artist, seek to “explore the vulnerabilities people face because of natural disasters, and the ways in which communities come together as a result.”

Goldman, founder and executive director of the Texas Organizing Project (TOP)  led the discussion between panelists Maria Moreno, director of communications at TOP, Marianela Acuña-Arreaza, executive director of Fé y Justicia Worker Center, and Lance Gilliam, a senior policy advisor for Harris County Precinct 1. The panel aimed to educate guests on Harvey recovery – what has and has not been done – and how to make Houston more equitable in the process.

What has become obvious to Houstonians citywide is that there is disaster money entering the pipeline for recovery purposes. Lots of it.

The main takeaway of the discussion, however, was that even if money comes falling from the sky and we have more than we know what to do with (however unlikely that may be), without engagement, money will be spent unequally. Moreover, despite the multibillion dollar federal disaster allocations, it has been a tough year in U.S. disasters, and money must be divided between Texas, California, Puerto Rico, and the U.S. Virgin Islands.

Most vulnerable to an inequitable recovery, and the focus of each of the panelists’ work, are low-income communities and low-wage workers, especially undocumented immigrants working in construction. With less than six weeks until the start of the next hurricane season, the sense of urgency among advocates is an everyday presence. The priority of each of the panelists’ organizations is ensuring their communities have a voice in the recovery process and are not left behind.

Without local recovery policy steering by communities and advocates, however, and an over-reliance on Federal aid dollars, low-income communities are in danger. On one hand, many homes affected by the flood waters fall into the contested category of “naturally occurring affordability,” which largely includes housing units that are not fully up to code, or in hazardous areas – such as flood plains. Harris county feels, stated  Gilliam, that while many of these communities should be bought out, the right of residents to stay where they are if they so choose, makes “safe, affordable, replacement housing…a non-negotiable” where buyouts do occur.

While federal programs such as Army Corps of Engineers Bayou Projects proved themselves incredibly effective against flooding during Harvey, the Corp’s criteria, said Gilliam, is inherently “codified discrimination based on income.” The criteria for giving federal projects the green light, he explained, is based solely on the property values of homes, rather than the number of citizens in an area of interest. In order to qualify, a neighborhood can have no lower than a 1:1 cost ratio. Simply put, the federal government will not provide the funding in low-income neighborhoods because the homes are not valued high enough. While Brays bayous in Houston’s more middle class neighborhood of Braeswood qualified for federal project, as did Sims bayou’s main channel (barely scraping by at a 1:1.1 cost ratio) Gilliam stated bluntly, “you can’t sugarcoat it…if all we have is federal Army Corps of Engineers money, you’re never going to see a long-term project on Greens Bayou,” that travels through the historically low-income Northeast quadrant of the city.

The most important thing for Houston, echoed the panelists, is for communities to get involved and stay engaged. State and City officials have a crucial role to play by actively seeking – and acting upon – citizen participation. One major difficulty Moreno pointed out, with regards to getting more Houstonians to understand the magnitude and severity of damage that remains almost a year after the storm, is that “the pain people are enduring is not visible,” as mold and shoddy repairs hide behind front doors. The coming together of so many Houston non-profit and advocacy organizations, however, as well as the increased attention to flood risk in the wake of Harvey, gives them hope for a more equitable future for Houston.

“We need to stay together,” said Acuña-Arreaza, followed by Gilliam’s insistence that, “it’s going to take a motivated constituency…if we are going to see change.”