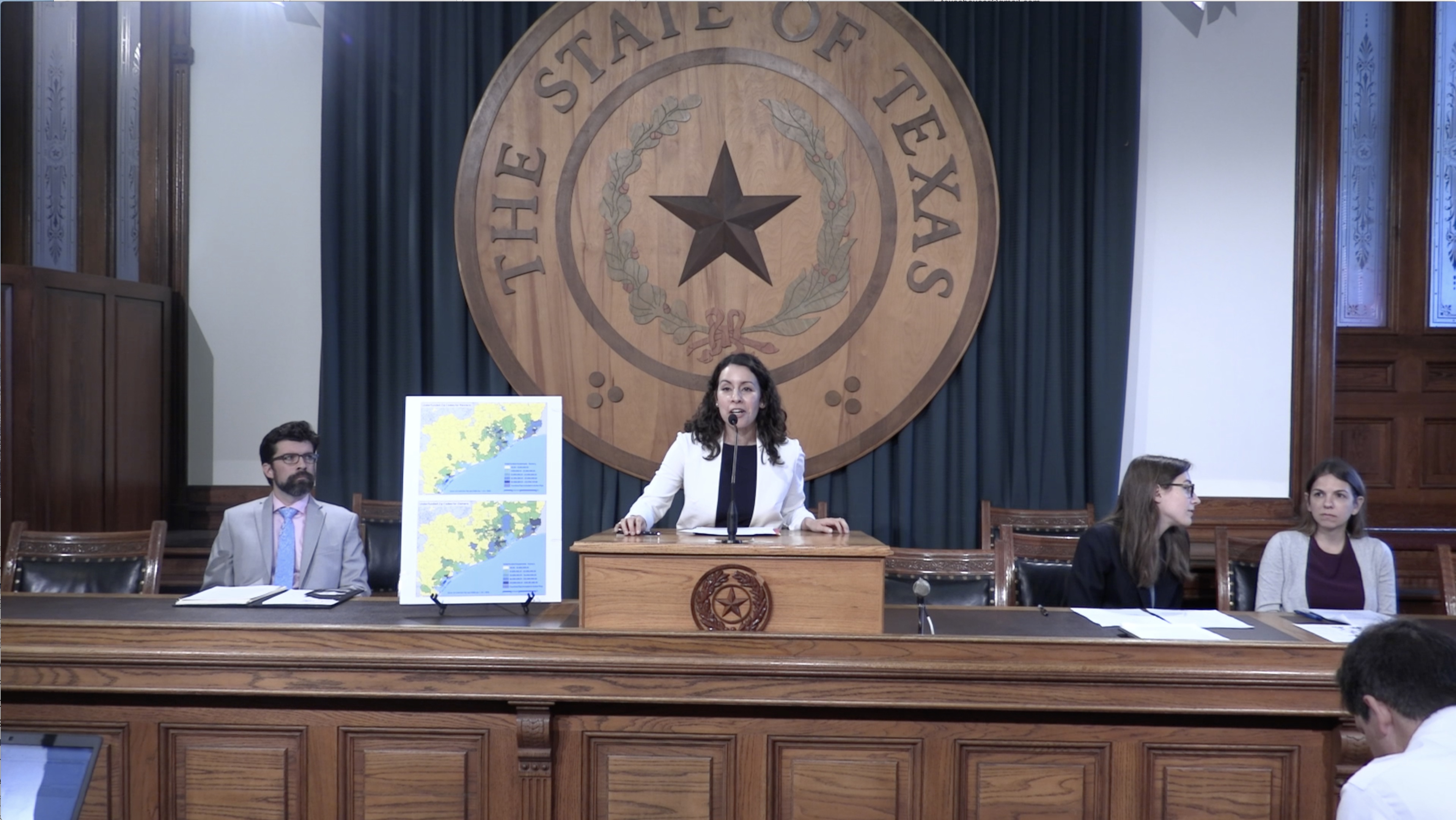 Texas Housers and the advocacy partners called on the General Land Office Friday morning to amend their methodology for determining needs of Texans in order to ensure that the needs of low- and moderate-income people are budgeted for adequately.

“The GLO uses this data on housing damage and property loss to budget for the long-term unmet housing needs for Texans,” Texas Housers research director Charlie Duncan said. “The problem is that the way that GLO does this in their draft action plan cuts out thousands of low-income homeowners and renters who are entitled to, and in desperate need of housing assistance to rebuild their lives.”

View the press conference held at the Texas Capitol here.

All Texas families, no matter how modest their incomes or homes, deserve fair access to the resources that will help them rebuild after Hurricane Harvey.

As proposed, the General Land Office’s (GLO) State of Texas Plan for Disaster Recovery would deprive thousands of Texans of the funds they need to rebuild their homes. Texas Housers has analyzed the plan and discovered that thousands of households will be denied the resources they need to rebuild their homes because of a flawed methodology adopted by the GLO that determines where and to whom federal disaster rebuilding funds will go.

Texas Housers has identified an additional $1.17 billion of unmet need for low- and moderate-income Texans affected by Hurricane Harvey.

Texas Housers proposes a more accurate methodology that properly recognizes the rebuilding needs of disaster survivors, instead of GLO’s approach that sets a high qualifying loss threshold for homeowners and renters. This results in the recovery needs of most lower income households not being budgeted for in the state’s Action Plan.

“This must be a fair recovery for everyone. Whether your house is worth $1 million or $30,000, a foot of water renders your home equally unlivable,” said Texas Housers research director Charlie Duncan. “There is a fundamental bias in the GLO’s methodology that means thousands of Texans of modest means will not be able to go back home and recover.”

The federal government charges state officials with determining how the $5 billion in federal grants will be distributed among impacted regions, prioritizing those with needs unmet by private insurance. The GLO draft plan proposes, regardless of income, that a homeowner only be considered to have an “unmet” need if FEMA valued their loss at $8,000 or more, or if a renter, a valued loss of $2,000. The GLO’s proposal favors higher income households while leaving out those low- and moderate-income households struggling to recover.

Texas Housers has aggressively used federal and state public information laws to gain access to details on who suffered damage during Hurricane Harvey and remains in need of housing assistance.  The data paints a clear picture that thousands of Texans with few resources have suffered damages to their homes at levels that render their homes unlivable yet would be excluded for getting help under the GLO’s plan. For example, based on FEMA data, homeowners of the most modest means suffered average Harvey damages of $7,000 while higher income homeowners had average damages of $13,500. GLO’s proposed threshold for unmet need is skewed to reject the most low-income homeowners.

Texas Housers calls on GLO to adopt an alternative methodology, which sets unmet need thresholds that are based on the average FEMA loss estimates for different income groups.  Using this more accurate methodology, Texas Housers has ranked the top 20 zip codes that are at risk of being underfunded and undercounted when compared to the GLO’s current plan.  At the top of the list are majority Hispanic and African-American neighborhoods in Houston and Port Arthur as well as areas across the Coastal Bend. Thus, the GLO’s proposed method of allocating funds has a disparate impact on these two groups of people in violation of civil rights laws.

The Texas Housers’ analysis is informed by the work of Texas RioGrande Legal Aid (TRLA) in representing hundreds of low- and moderate-income homeowners and renters desperately trying to rebuild and recover along the Texas Gulf Coast.

TRLA has more than a decade of experience of ensuring that Texans with few resources get what they need to rebuild and recover from natural disasters. Their work continues after Harvey in the Coastal Bend, where many residents and homeowners are still reeling. Their hope for recovery, then, rests with the long-term aid that the GLO is administering.

“The GLO plan overlooks many of the most important problems for low-income disaster survivors,” said Rachel Zummo, a TRLA attorney who has been working with Harvey survivors since the storm’s landfall. “For example, a lot of low-income renters are completely displaced by disaster, living in towns far from their old apartments,” said Zummo, who manages TRLA’s disaster-related community development team. “Yet in order to get their applications for FEMA aid processed, they often have to arrange inspections of their old apartments, which are now tens if not hundreds of miles from their current homes. This is just one of the obstacles for low-income people trying to get accurate assessments of how much they’ve lost.”

Kate Rainey, a TRLA attorney also working on disaster-related community development, said, “We’ve learned from previous natural disasters that state recovery plans like this one have lasting effects on communities. This plan is a transformative opportunity for Texas to expand access to quality housing in disaster areas. So, it’s vital that the GLO act now to include low- and moderate-income households that have been excluded at every point in the recovery process thus far.”

“The GLO plan excludes thousands of families in the region where I live and work,” said Clinton McNair of Texas Housers. McNair oversees community engagement in the Port Arthur-Orange-Beaumont region. “The people in my community have experienced too many disasters where they have been left out and we can’t let that happen again.”

It doesn’t have to happen again. The GLO must employ Texas Housers’ proposed methodology in their action plan revisions to meet the needs of those with the most difficult path ahead.

“We know that low-income people of color are undercounted and underserved by FEMA in disasters,” Texas Housers Houston co-director Chrishelle Palay said. “For the GLO to actually magnify their exclusion is unacceptable. We call on the GLO, Governor Abbott and HUD to treat every Texan fairly by ensuring an inclusive plan to award housing funds for rebuilding.”

The U.S. Department of Housing and Urban Development granted the State of Texas $5 billion for long-term rebuilding of housing. The state, is expecting another $5 billion later this year.