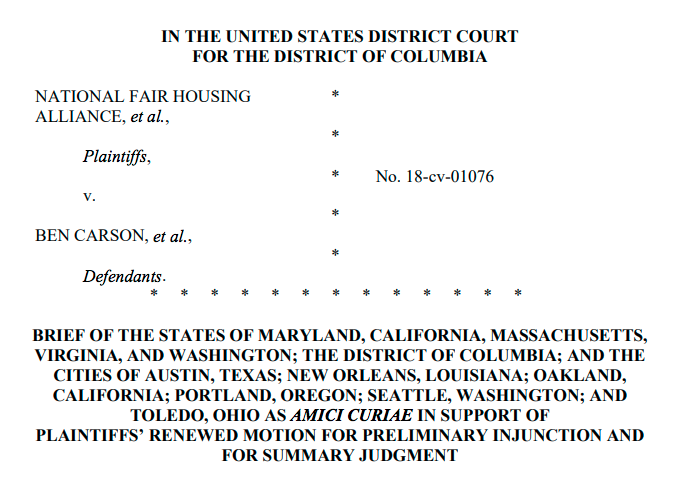 Numerous cities and states, including the City of Austin, as well as housing and anti-poverty advocates, filed amicus briefs this week in support of a complaint Texas Housers, Texas Appleseed and the National Fair Housing Alliance filed against the U.S. Department of Housing and Urban Development in May.

The lawsuit was originally filed May 8 in federal court in Washington D.C. in response to the federal housing agency’s abrupt decision to delay the implementation of the Affirmatively Furthering Fair Housing rule. The rule, finalized in 2015, provides necessary guidance to ensure that jurisdictions, under the Fair Housing Act are fulfilling their obligation to undo the legacy of government-created segregation.

In response to the lawsuit, on May 23, HUD then withdrew the tool that aids local jurisdictions in completing Assessments of Fair Housing. Texas Housers, the National Fair Housing Alliance and Texas Appleseed amended the lawsuit late in May and called on the federal housing agency to rescind the May 23rd notice and fully implement the Affirmatively Furthering Fair Housing rule immediately.

Dozens of groups, both local and national, this week submitted amicus briefs in support of Texas Housers and our partners. These groups include the National Low Income Housing Coalition, The Opportunity Agenda, the North Texas Fair Housing Center, the Austin Tenants Council, Inclusive Communities Project, Race Forward and the National Coalition for the Homeless among many others. Several cities and states also filed their own amicus brief in support of the lawsuit, including Austin, Texas.

See the court document below:

And the appendix listing the 50+ organizations joining the brief.

The amicus brief filed by cities and states is below.

Co-director of Texas Housers John Henneberger wrote in his declaration submitted to the court:

“Segregation, disparities and inequities still exist across Texas and there is little hope that any of the jurisdictions, or the state, will pay attention to the AFH process or the rule’s provisions, because HUD has signaled through its withdrawal of the AFH tool and effective suspension of the AFH process that they don’t have to do so. Without the AFH process, the AFH tool and the AFH rule’s provisions there is effectively no way to require a local government to focus attention on housing discrimination and segregation issues.”

The AFH tool and process provided a structure for the careful examinations necessary to make change. The AFH tool was tailored to make the government responsible for undoing government mandated segregation. HUD’s long-term suspension of local governments’ obligations to conduct AFHs by withdrawing the AFH tool has terminated or curtailed program participants’ examinations of their own respective roles, and those of other actors, in creating and continuing racial and ethnic disparities. The withdrawal of the AFH tool, and the effective suspension of the AFFH rule, have significantly reduced the likelihood that state and local governments will be serious about undoing those patterns.”