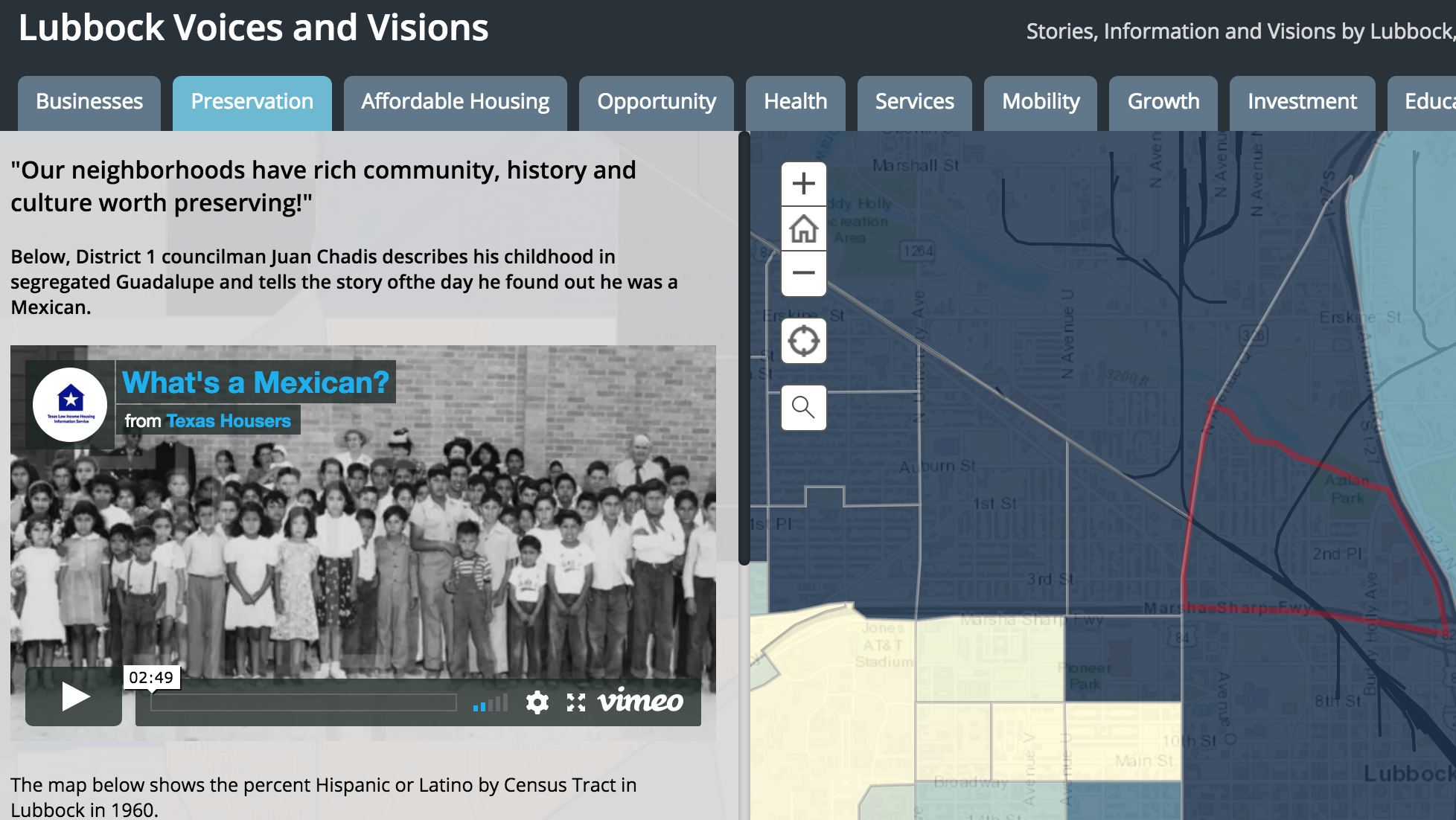 Whether they’re black, Hispanic or white; whether they live on the east, north or southwest sides of town; or whether they’re affluent or of modest means, Lubbock residents all want the same thing: a decent home, a safe neighborhood, and the dignity of local leaders hearing their concerns and experiences.

This was clear from community residents’ reaction to a collection of stories, archives, and data that Texas Housers created and presented to Lubbock residents last weekend.

In late March, the statewide Housers team converged in Lubbock for a weekend of personal interviews with community leaders and residents of all ages. Housers spoke to Lubbock residents about the history of their neighborhoods and their memories growing up there, the events that shaped Lubbock’s geography of segregation and inequality, what their communities are like now, and what they’d like to see changed in the future.

On June 2nd, Texas Housers  premiered the results at the Mahon Library for a crowd of around 45 community members from around the city, many of whom were themselves featured in the videos. Texas Housers Northwest Texas co-director  Adam Pirtle and community planner Amelia Adams showed the videos and gave a brief demonstration of how to use the maps. After the presentation, attendees spoke in groups about what other aspects of their stories they wanted to see highlighted.

The Lubbock Voices and Visions project is using the powerful Esri StoryMap platform to combine short video documentaries with corresponding maps, photos and data to reflect and amplify  residents’ experiences and voices.

“This is about telling stories that aren’t always heard,” said Pirtle. “People in cities – often times you only hear the powerful people and the people that have control of the media – you only hear those stories. We’re trying to do something different here.”

Another purpose of the StoryMap is to serve as a hub for information about the city. The hope is that this data can help communities reinforce their arguments, using the context of historical patterns of inequality to push for proactive change.

In planning for the future, Lubbock must confront its long legacy of racialized inequality. East and North Lubbock have historically been the site of not only segregated black and Hispanic neighborhoods, but also industrial land uses, substandard housing, urban renewal projects, freeway construction and ongoing disinvestment. For example, many East Lubbock residents complain that there are few vestiges of the once-thriving black business district remaining and that people who live on the east side of town have to travel long distances just to purchase groceries or go out for a meal.

Some concerns raised in the video interviews particularly resonated with premiere attendees. These included the health hazards produced by industrial processes, lack of opportunities for young people and the difficulty of starting businesses in these neighborhoods.

The meeting provided an opportunity for residents to share their own stories, echoing concerns from the videos and raising more of their own. One resident told the story of a young nephew who had suffered a fatal asthma attack while living in the vicinity of a cotton oil processing plant in a nearby Texas town. A family from the outskirts of the city spoke of their challenges with acquiring basic infrastructure for their neighborhood, including lights and street paving. These stories were met with shock, anger and determination from other residents.

The Lubbock 2040 comprehensive planning process has essentially ignored the long-term complaints and demands of these communities and only tepidly addressed  their real concerns. Rather than actively reaching out to East Lubbock community members to learn about what they saw as the strengths and challenges in their communities, many residents felt that the consultants in charge of the public process had glazed over the eastern half of the city. The authors of the plan focused greatly on  the Canyon Lakes as a valuable asset but the consultants have ignored the concerns of the people who live nearby. One Chatman Hill resident felt that the informational meetings had reflected the same tired perceptions of East Lubbock as “the wrong side of the tracks.”

The Lubbock Voices and Visions project seeks to elevate the stories and experiences of the people living in Lubbock’s marginalized black and brown communities. Texas Housers hopes to use this as a tool that will help the Lubbock community members  see that they’re not alone in their concerns, provide a space for communication and collaboration between people in different neighborhoods, and eventually bring a unified vision and collective demands to the citywide planning process.