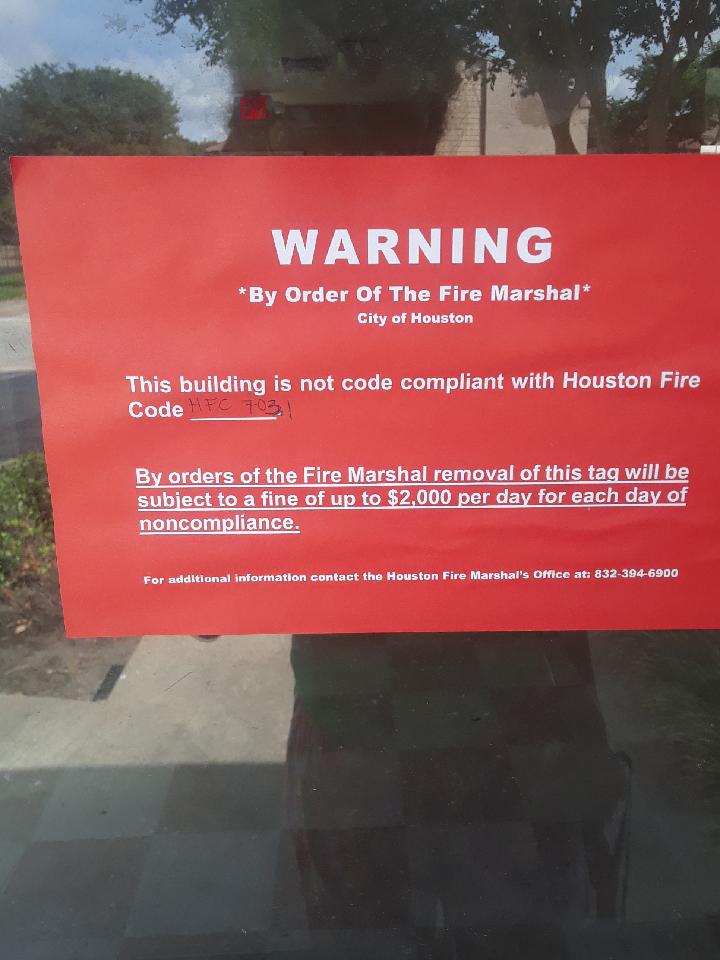 (Photo above is of red tag, labeling Arbor Courts as a fire hazard)

HUD Secretary Ben Carson declared that conditions in HUD-subsidized, low income apartments are so nice that they deter residents from wanting to get a job and get out. Maybe Secretary Carson should drop by Houston’s HUD-subsidized Arbor Court Apartments.

There he would find the tenants:

If Carson visited he’d find there a dozen parents all holding jobs, or who are elderly or disabled who have filed a federal lawsuit against his department as a last resort because they are trapped in unendurable conditions — trapped because their HUD housing subsidy would be cut off if they tried to move.

These are the living conditions that the U.S. Department of Housing and Urban Development pays a private landlord over $2.4 million each year to provide. The tenants collectively pay the landlord more than $440,000 a year on top of HUD’s payment. In a lawsuit filed this week, more than a dozen current and former tenants are asking HUD to end its contract with Arbor Court and give them the opportunity they deserve to live in safe, decent homes with a Housing Choice Voucher.

Earlier this year, Texas Housers was approached by tenants who struggled with flooded apartments and dangerous living conditions after Hurricane Harvey. We then supported the tenants to understand their experiences in the context of HUD policy and fair housing.

Attorneys from Lone Star Legal Aid and civil rights attorneys Michael Daniel and Laura Beshara are representing the tenants in the lawsuit.

The Arbor Court apartment owners hold a contract with HUD, through which HUD pays the owners to rent units to families and individuals who qualify for housing assistance as long as the apartments meet HUD’s standards for providing decent, safe, and sanitary homes. The lawsuit says Arbor Court has failed to do so and HUD has continued to fund it.

The complaint filed in federal court in Houston lists the following ways the apartment complex puts residents at risk:

Because of these problems, HUD is in violation of its contractual obligation and should, instead of continuing to pay the apartment owners, provide tenants with Housing Choice Vouchers that would allow them to find suitable homes that do not put their safety at risk. The tenants, most of whom have children living with them, are asking the court to order HUD to make things right.

The tenants also claim in the lawsuit that HUD is shirking its responsibility to affirmatively further fair housing. The vast majority of residents of Arbor Court (95 percent) are African American and the complex is in a census tract that is only 3 percent white. Meanwhile, HUD provides decent and safe housing for residents of other apartment complexes that hold similar contracts as Arbor Court — only these complexes are in The Woodlands, in majority-white census tracts and many of the projects are home to a majority-white population.

HUD knows about the unequal conditions that majority African-Americans are subject to who live in its subsidized apartments. It knows the racial make-up of Houston and the entrenched patterns of segregation that the agency itself has investigated — yet HUD has made no apparent effort to address the segregation of subsidized housing residents. Of the 44 apartment complexes within the City of Houston that are HUD project-based rental assistance developments, 42 of them are in high-poverty neighborhoods of color.

Texas Housers has worked directly with many of the tenants of Arbor Court, most of them mothers with young children. Study after study show that children who live in conditions such as those of Arbor Court do worse in school, get sick more often, and face an uphill climb when trying to catch up to their peers who were able to grow up in a decent home in a safe neighborhood.

The mothers of Arbor Court Texas Housers has worked with have hopes for their children and themselves, not different from any other parent. Good students, decent jobs, and self-sufficiency is their vision.

The lawsuit sets out in heartbreaking detail the stories of the parents and children who live at Arbor Court Apartments. Here is one tenant’s story from the lawsuit:

Daija Jackson is a project-based Section 8 voucher recipient and has been a resident of Arbor Court Apartments since October 2016. She has two children, ages four (4) years old and one (1) year old. Less than a year after Ms. Jackson moved to Arbor Court Apartments, Hurricane Harvey struck the Houston area with incessant rains over the course of several days. In the midst of the hurricane, Ms. Jackson was in the home with her then 4-year-old son and newborn daughter when water began entering the apartment. The family lost all of its belongings in the rising waters including: toys, clothing, a washer/dryer set and a brand new, still unassembled crib Ms. Jackson had purchased for her infant daughter. In the wake of Harvey, Ms. Jackson and her children were forced to relocate to various hotels in the metropolitan area and then to a relative’s home when her FEMA benefits concluded. Five months following the hurricane, Ms. Jackson was finally able to secure a second floor apartment in the Arbor Court complex. Nevertheless, Ms. Jackson continues to have concerns regarding the conditions of her apartment unit. She recently discovered that there was black mold present within the unit that remains unaddressed. In addition to the chronic issues in need of repair within the unit, Ms. Jackson is gravely fearful of the criminal activity that persists in the neighborhood surrounding the apartment complex. Ms. Jackson has observed several physical assaults on the grounds of the complex and has consistently heard gunshots immediately outside of her unit windows. Upon hearing the gunshots, it is not uncommon for Ms. Jackson to grab her young children and force them to the ground so that they avoid serious injury. Ms. Jackson is employed at a local fast food restaurant and her limited income precludes her from acquiring an apartment in a safer, less flood-prone neighborhood. As a result, Ms. Jackson is anxious about the potential of future flooding at the complex and even more concerned about her family’s safety due to the unceasing violent crime in the surrounding area.

Read the full complaint below.