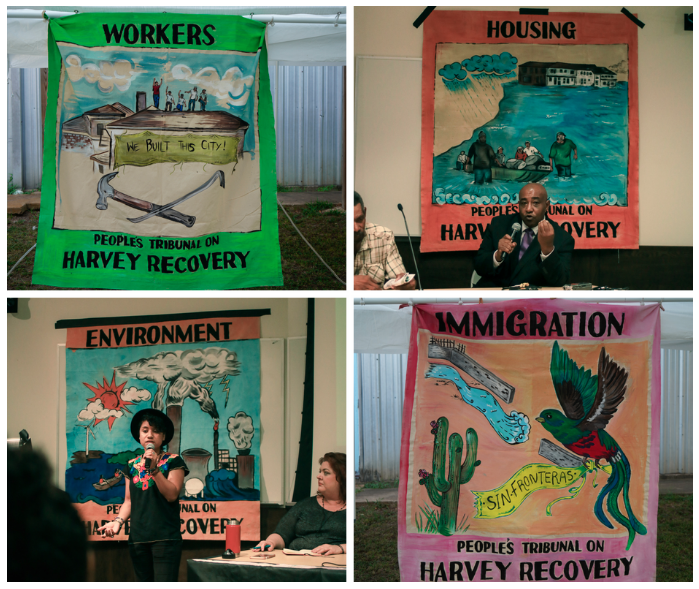 As the one year anniversary of Hurricane Harvey approached the Houston Organizing Movement for Equity coalition also known as  HOME knew they wanted to push back against the mainstream narrative that all Houstonians had recovered from the disaster.

HOME was formed in the immediate aftermath of Harvey and gathers policy advocates, organizers, and grassroots organization in three working groups (housing, environmental justice and labor) to advance a just recovery from Harvey and inevitable future climate disasters.  The coalition decided to host Houston’s first-ever People’s Tribunal to commemorate the storm, demonstrate state of recovery for low-income Houstonians (many of them black and brown) and lay bare the systemic inequalities that led to the storm’s disparate impact.  By hosting a People’s Tribunal, HOME centered the experiences of those still struggling to recover and worked with them to develop a set of recommendations to advance a just recovery.

On August 25th,  Harvey survivors, subject area experts (many of them local to the Houston area like Dr. Robert Bullard and Dr. Assata Richards), and survivors of other Gulf Coast disasters provided testimony in-person and via video on the storm’s impact on housing, immigration, environmental health, and labor.  Video testimony was a deliberate choice on the part of the HOME coalition to accommodate witnesses who were undocumented and uncomfortable speaking in person and those who wanted to tell their story, but could not afford to take time off work. In an additional effort towards inclusivity Spanish-English interpretation was available and speakers were encouraged to speak and write in the language that they were most comfortable in.   Those unable to join in person had the option to attend via livestream – and they did! Almost 3,000 people watched the tribunal on Facebook.

After testimonies for each track were delivered, judges with deep expertise in the track’s subject had a chance to speak with witnesses to better understand their experience and their hopes for recovery.  At the end of each track, judges retired (occasionally joined by witnesses) to debrief and develop just recovery recommendations for their track. You can read an early draft of their recommendations here (a Spanish translation is forthcoming).

The HOME coalition will use these recommendations as inspiration and a guide for a larger policy platform as federal recovery dollars for Harvey begin to make their way  to the city.