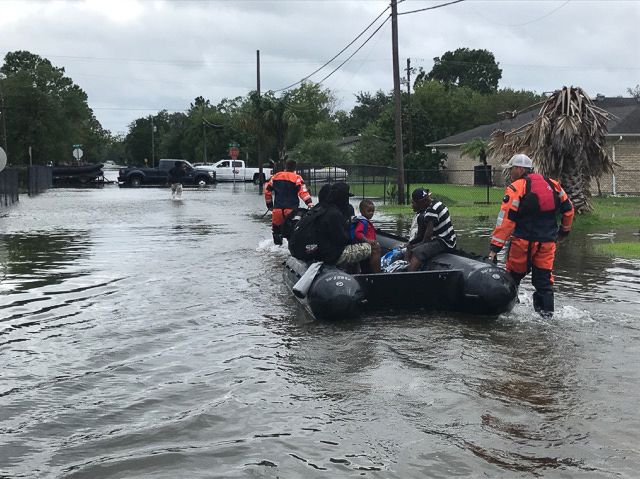 Port Arthur sits on the shore of Sabine Lake, the lake that separates Texas from Louisiana. It’s a small city of less than 60,000 people that’s 91 miles from Houston, 15 miles from the Gulf of Mexico, and still a long way away from recovering from Hurricane Harvey.

Along with Beaumont and Orange, Port Arthur is part of the Golden Triangle; a region that gets its name from the oil refining industry that makes up much of the local economy. Despite the “golden” moniker, Port Arthur’s median household income is not high. In 2016 the average household made only $32,000, while the state’s median household income is about $55,000. The city is home to sizable communities of color, with nearly 40 percent of residents identifying as African American or Black, and over 30 percent of residents identifying as Hispanic or Latino.

The National Weather Service reported that after Hurricane Harvey passed through Houston, it stalled over the Golden Triangle and left record rainfalls. When the storm had passed, cities like Port Arthur had taken much of the brunt. After the storm had cleared, the Episcopal Health Foundation reported that Harvey had left 60.58 inches of rain on the Golden Triangle and affected 500,000 homes with flooding.  However, unlike the path that took Harvey from Houston to Port Arthur, the media attention hasn’t followed suit. Instead of passing through Houston, it never quite left. Now, almost one year after Hurricane Harvey, residents are still waiting on aid and wondering what government response, if any, is coming. In our analysis and tracking of recovery activity in the area, we’ve seen three strikes that are working against a just and equitable recovery for Port Arthur.

Much of the government’s disaster response will come through Texas’ General Land Office (GLO). We’ve written before about the GLO’s action plan for distributing relief after Hurricane Harvey. One of our major concerns is the way that their proposed methodology for calculating unmet need leaves out many low-income Texans.

Then, the GLO methodology uses a standardized threshold for that FEMA-verified loss across all income groups. This threshold is high; $8,000 in verified loss for homeowners, and $2,000 of verified loss for renters. The GLO uses this data on housing damage and property loss to budget for the long-term unmet housing needs for Texans. This is a difficult threshold for many low-income households to reach. In a city with many low-income residents like Port Arthur, it means that the GLO won’t budget enough for their recovery.

In fact, when we compare the GLO’s methodology to our alternative methodology – one that adjusts unmet need thresholds to be more commensurate with income – we can identify which parts of the state where unmet needs are being underestimated. When the need is underestimated in some areas more than others, the GLO will not address recovery needs across the state fairly.

Under the GLO’s methodology, Port Arthur holds the unfortunate distinction of having two of the top six most undercounted zip codes in Texas. The difference is large. These are zip codes where damage is being undercounted in the tens of millions of dollars. If this remains unaddressed, the money meant to rebuild Texas won’t go to places like Port Arthur that are most in need.

While aid has been slow, the city’s response has been further hindered by the state’s slow speed in distribution and the lack of state support to connect Port Arthur to resources and funding. Both Governor Abbott and Commissioner Bush have emphasized local control in disaster recovery without providing a lot of details about how that local control will be empowered and employed. At a press conference held in Houston to talk about Harvey recovery, government officials all shared a similar refrain: The state was going to “cut red tape” to give local governments the freedom they needed to respond.

What we’ve seen is a different story. The GLO has shifted the responsibility of planning a disaster recovery, leaving many decisions up to local governments when many of them are as lost as the average disaster survivor is. Many of these local governments have been vocal about their confusion on how to access funding or navigate government programs to support their residents in dire need. The GLO is not communicating those opportunities for funding to local governments in a way that ensures that funding reaches the Texans most in need.

Additionally, Port Arthur is not showing up on the Governor’s Commission to Rebuild Texas, an application-based list that influences funding priorities. The Texas Department of Emergency Management – responsible for administering over $1 billion in FEMA Hazard Mitigation Grant Program funding – has not recommended any projects for funding in the whole of the Golden Triangle region. Finally, the City of Port Arthur is still waiting for guidance from the State on a housing program.

Strike 3: Take From The Poor, Give To The Rich

What is more, the GLO has not inspired confidence in its ability to support low- and moderate-income people in the Harvey recovery. They led the charge in petitioning HUD to divert federal long-term recovery  funding to higher income communities. Before Harvey had even dissipated, George P. Bush, the GLO’s Commissioner, had written to the U.S. Department of Housing and Urban Development requesting that the agency lower the requirement that 70 percent of CDBG-DR funds go to low- and moderate-income communities down to 50 percent. Per HUD’s own definition, the mission of the CDBG program is “providing decent housing, a suitable living environment, and expanding economic opportunities, principally for low- and moderate-income persons.” The state is responsible for ensuring that the grants meet that  70 percent threshold but it seems the GLO would rather not.

While larger cities like Houston often have the ability to attract talent to city staff or resources to hire sophisticated outside consultants to fill in the gaps on staff expertise, smaller cities like Port Arthur have a tough recovery ahead of them after any disaster. When they hire consultants to help prepare their disaster response plans, they should expect that consultant to make them aware of funding opportunities. When disaster hits as hard as it did, they should expect that Texas state agencies would reach out, provide technical assistance, and prioritize the hardest hit areas of a disaster.

As an organization that is greatly concerned with the rights and the futures of all Texans, we cannot help but feel uneasy when we see clearly how this disaster recovery will not be for everyone. Under a banner of devolution, the GLO and the State of Texas leave smaller local governments wondering what to do. In the worst cases, they will flounder and low-income people will bear the burden. As it exists, the State’s action plan will leave many lower-income cities wondering what happened to the money they had hoped for. Smaller cities like Port Arthur shouldn’t be left out of recoveries, especially not under the guise of freedom from red tape.