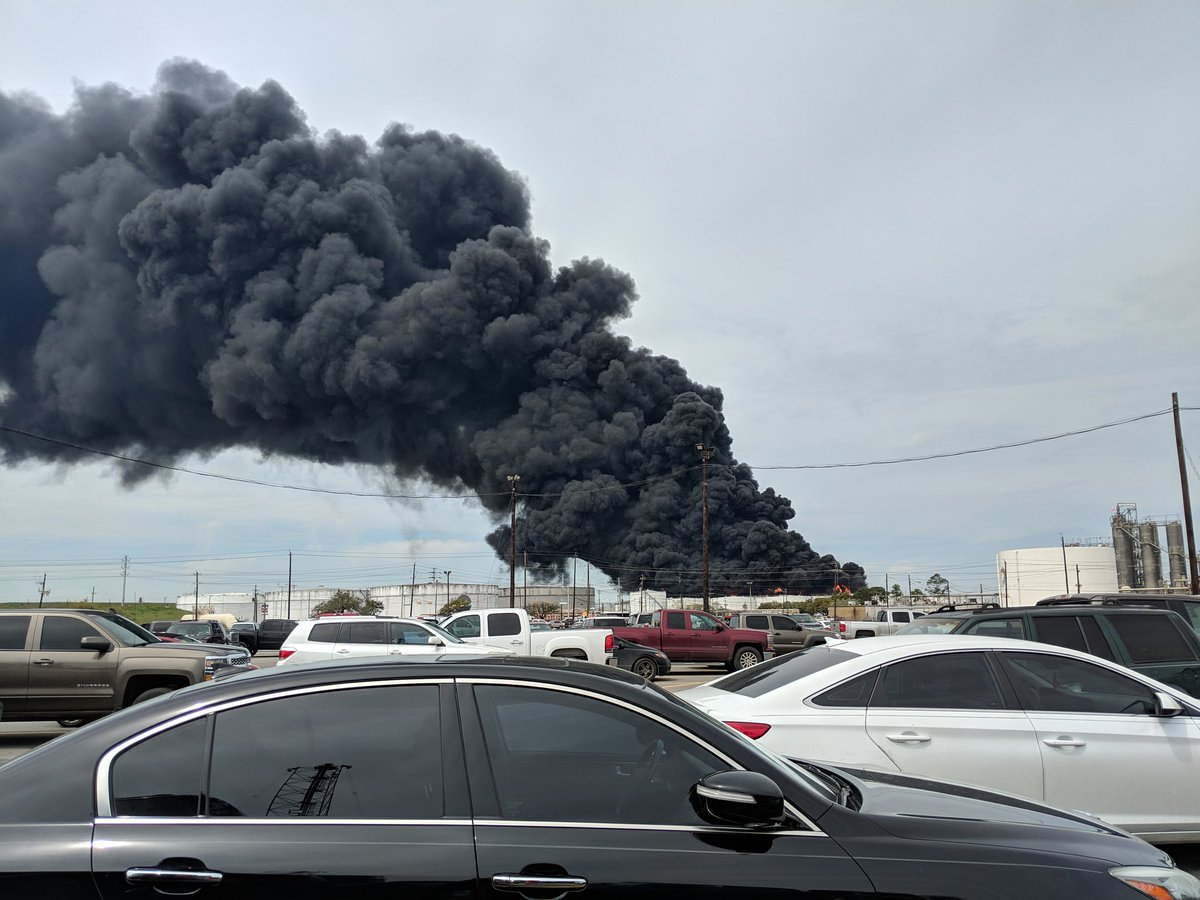 Following the breaking news of the ITC disaster, SE Texas Co-Director Zoe Middleton joined a rapid response team of advocates pushing for transparency and a just and equitable support structure. In the first 10 days after the disaster, the group developed and gathered results from a health impact survey, mounted a press conference, convened three town halls, and brought more than 15 people to speak at Harris County Commissioner’s Court. Here are some of her reflections.

Whether it’s a natural occurrence like Hurricane Harvey or a chemical explosion like the ITC fire, disasters are large-scale events that shine a light on everyday, quality-of-life problems. Harvey saw a disparate impact on communities of color who lack even the most basic stormwater protection. In fenceline communities like Deer Park (where the ITC explosion took place), Pasadena (where many of the organizers in our rapid response coalition live), Galena Park, and Houston’s East End — many of which are majority non-white neighborhoods — toxic emissions and exposures that impact human health, air quality, and the value of the housing stock are simply a fact of daily life.

The ITC disaster resulted in immediate displacement and, unless quick and decisive action is taken, it could likely lead to displacement in the long-term. At the town hall events Texas Housers attended, organizers heard from residents who sent children and elderly parents as far away as Corpus Christi, and they also expressed concern about their ability to remain in fenceline communities. At the Pasadena town hall, resident Kenya Escobar said “I’ve lived here my whole life, my family is here, I want to have my house here, but I can’t, I know that I can’t do that to myself, to my future kids, to my husband.” Another Pasadena resident told us he arranged for the value of his house to be estimated the day after the disaster and plans to sell and relocate as soon as possible. The disaster also emphasized that our current land use standards are unacceptable. Some residents wondered if buyouts that would allow them to move out of harm’s way and the creation of a buffer zone around dangerous facilities were possible.

The total cost of the ITC disaster is still being calculated, but low and moderate income people are already holding a bill. Despite being the largest incident in the Gulf Coast of its kind in 14 years, many residents themselves paid for missed work, hotel stays, and safety precautions. They were upset that a state of emergency was not declared to allow federal vouchers to cover the cost of temporary accommodation out of harm’s way. Texas has the highest rate of uninsured people in the nation, meaning many seeking examination and testing for exposure had to either forego treatment or pay out of pocket. Groups with intersecting identities are especially concerned about their ability to recover. Cesar Espinoza, the executive director of immigrant rights group FIEL, said he has already received calls from undocumented laborers about dangerous cleanup conditions. Several town hall participants with chronic health conditions complained of exacerbated symptoms.

A frequent demand at the community meetings, in particular the town hall in Pasadena, was for a higher standard of preparedness and training for environmental disasters. Residents were clear about the need for evacuation protocols, school shelter-in-place kits, and the ability to test for exposure to toxins like benzene at area medical centers. Residents demanded that public air monitoring be conducted more consistently in fenceline communities and that a regional air toxins plan be implemented.

Speaking at that same town hall a woman named Carla said, “there’s nothing in place that gives a sense of security that [the ITC disaster] is being handled in the appropriate way and that’s what we need. We need an emergency preparedness system for an environmental because that is a very real reality when there are bombs sitting in your backyard.”

While attending Commissioner’s Court, it became clear that state-level preemption and regulatory capture by the oil and gas industry weaken the region’s efforts towards resiliency. Residents were angered to learn about a cap on civil damages that could be awarded to a city or county. The suit against ITC by the state of Texas was seen as “grandstanding” and attendee Sarahy Garcia wanted to know if the state could be sued for “incompetence” adding around the 2:00:00 mark: “The Governor obviously does not care about us, especially since it’s black and brown communities that are mostly being effected. I urge the Governor to listen to us, because we were left behind during Harvey.”

Going forward, the county government must play a large role in supporting a cultural shift that prioritizes the well-being of fenceline communities over the profit of industry. This will require making public participation easy for the residents of Deer Park and surrounding areas, demanding that the TCEQ and EPA uphold their missions, and implementing plans and practices that make the region safer by holding corporations like ITC accountable.