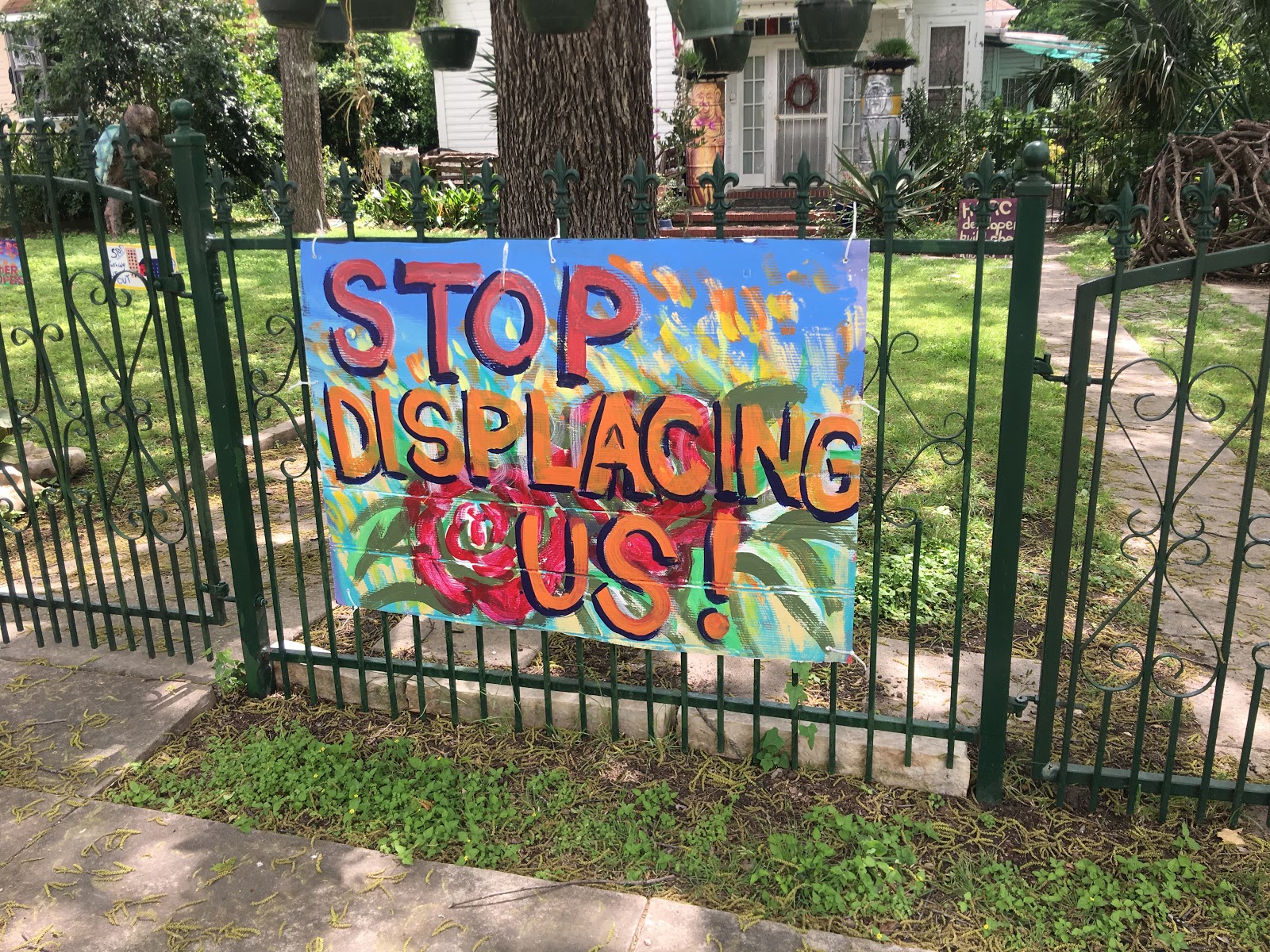 Without setting foot in one home or even talking to a single resident, a simple walk through the streets of San Antonio’s Government Hill neighborhood reveals much of the residents’ frustration. Yard signs read “Stop displacing us!” and “Mi barrio no se vende.” Behind closed doors, many families are wondering what to cut from their budget next and how they will hold onto their home for another year.

Government Hill is located just across the highway from the Pearl Brewery, a massive mixed-use redevelopment project that received city tax incentives. The Pearl caters to a well-to-do crowd and boasts some of the highest real estate prices in the city, but its effects reverberate far beyond its limited footprint. Real estate values have shot up around the development, and once-affordable neighborhoods surrounding it are quickly becoming prized investment opportunities. For some longtime residents, this has made the threat of displacement increasingly urgent.

The mayor of San Antonio, Ron Nirenburg, has made dealing with the city’s affordable housing crisis a central theme of his tenure. In 2018, the mayor assembled a Housing Policy Task Force, a five-person panel entrusted to advise the city on how to protect residents from displacement and increase the availability of affordable housing. This task force produced a report that yielded disappointing statistics and introduced recommendations for how the city could comprehensively address its housing problems.

Nationally, this action has gained attention. Mayor Nirenburg has even been appointed to a National Task Force working to develop best practices for cities facing a shortage of affordable housing.

However, outlooks are less rosy in San Antonio neighborhoods severely impacted by the housing crunch, and frustration with the city has reached critical levels. During a community meeting at Guadalupe Parish Hall in February, a large crowd of church leaders and parishioners spoke to the mayor about the housing struggles they face.

“Fifty-nine years ago, I was born in [my] house,” Rose A. told the mayor. “My children also would love to be able to live in my home when I pass away, but that is a dead dream for them with all the development that we are seeing. And there are no guidelines, no protections for the people that live there, that want to continue living there.”

Antonia Infante spoke about the everyday stress and pain of her Government Hill neighbors, who are struggling to keep their homes in the face of property value increases. Her family has lived in their home for decades and paid off the property in full. However, their property tax bill now threatens to break the family’s limited budget. Infante’s experience is not unique. The San Antonio Heron reported that all three near Eastside neighborhoods – Government Hill, Dignowity Hill, and Denver Heights – were seeing skyrocketing property values.

Meanwhile, the city’s reaction — a recently approved Displacement Risk Mitigation policy — only assists those who are already facing imminent displacement. The policy makes available $1 million per year to provide emergency assistance to residents with unexpected financial emergencies and assist those pushed out by rent increases or redevelopment in finding and paying for a new home.

The ongoing displacement of tenants at the Soapworks and Town Center apartment complexes attests to the critical need for such assistance, but it also points to a greater problem that won’t be solved through “mitigation” alone. Low and medium-income residents, especially renters, are finding themselves rapidly priced out of their neighborhoods. With rising rents all over the city, alternative housing options are becoming fewer and farther between. As one resident put it, the Displacement Risk Mitigation Policy is merely “a bandaid for those who are already being displaced” and not a comprehensive prevention plan.

While the city council has approved the Displacement Risk Mitigation policy, the larger Displacement Prevention Plan is still only in its nascent stages. Feeling the pressure from organized residents, the city has decided to prioritize this over other tasks.

At this point, the city plans to conduct a Displacement Prevention Assessment, analyze existing studies, and update the Vulnerable Communities Assessment done by the National Association of Latino Community Asset Builders (NALCAB). The original study directly links massive public investments, like CCHIP, to the destabilization of neighborhoods around downtown.

It’s unclear which displacement prevention strategies will make the cut after this analysis is completed, but various ideas for inclusion in the plan have been floated so far. For example, a one page timeline prepared by the City’s Neighborhood & Housing Services Department mentions assisting seniors in registering for Over-65 tax exemptions, land title remediation services, and homeowner legal assistance. All of these could prove helpful for struggling homeowners.

Also included is the implementation of Neighborhood Empowerment Zones (NEZs) as a method of decreasing property tax burdens in the near Westside and Eastside. However, while these zones would have tax benefits for existing owner-occupants, they would also be an immense boon to the developers and speculators already very active in these areas. The city is also very motivated to look into by-right zoning and incentive zoning, which are also geared toward making the development process smoother and more lucrative.

Some community leaders are pointing to the stark contrast between the city’s incremental action on displacement prevention and the rush to reinstitute the CCHIP policy, a downtown development tax incentive program that has, until recently, produced almost no housing affordable to average San Antonians.

“When it came to getting developers their money, you operated with a great sense of urgency,” COPS/Metro organizer Walker Moore said, addressing Mayor Ron Nirenburg. “When it comes to making sure that regular people don’t get displaced, you have no urgency.”

Rose A. stated it in plain terms: “We are asking you, mayor, to step it up”