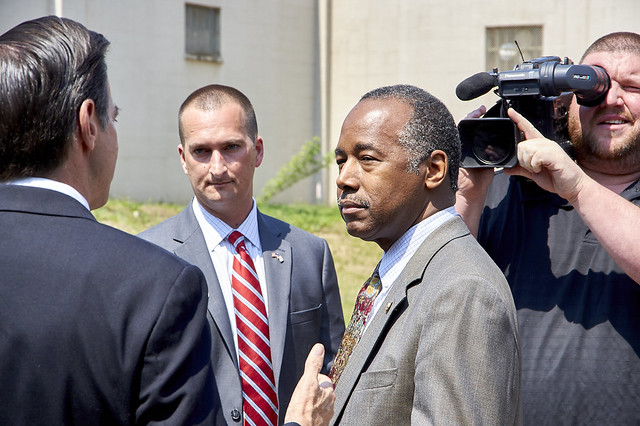 This week, President Trump announced the U.S. Department of Housing and Urban Development is “suspending all foreclosures and evictions until the end of April.” Later walking back the President’s imprecise announcement, HUD Secretary Ben Carson that HUD is only encouraging public housing authorities to suspend evictions but not directing them to do so.

The plan President Trump announced, amended by Secretary Carson, leaves out millions of the lowest income American families it serves. While about 42,000 Texas families live in public housing, nearly 200,000 Texas families who are equally poor and vulnerable live in other HUD-supported housing.

Our survival under this health crisis requires that people follow the instructions of local, state, and federal authorities to exercise social distancing and take other preventative measures. While this minimizes potential interaction with novel coronavirus COVID-19, it also limits many people’s access to their jobs and the income to pay their rent. In particular, hourly and contract workers and those in the service industry are suffering a loss of income. Many of these households are the people who depend on HUD-assisted housing.

“In this pandemic, the single greatest need is a place for families to live while they self-quarantine, in order not to risk infection or even death,“ stated John Henneberger, co-director of Texas Housers. “It is of paramount importance that the Trump administration and Congress take immediate action to prevent hundreds of thousands of the poorest American families from losing the safety of their homes.”

“In the past 48 hours, government officials in many jurisdictions have ordered people to ‘shelter in place (at home).’ That is going to be impossible for families who are evicted,” Henneberger observed.

When this outbreak ends, we must also address the pandemic’s lingering effects. Once these restrictions on evictions are lifted, we can’t allow tenants who have deferred rent payments for months to suddenly face demands for immediate payment of an exorbitant amount of back rent. It’s critical HUD have a policy that allows for long-term affordable payment plans, or better, HUD should simply abate all rent owed by its tenants for the quarantine period.

America’s most impoverished families deserve the same consideration this administration and Congress is promising to large corporations. If our government decides corporations are too big to fail in the wake of this unprecedented crisis, it should also ensure that families are too important to fail.

“It is too easy and it is, in fact, cruel for the President to offer false assurances as he did today in the sweeping and factually inaccurate claim that HUD is suspending evictions,” Henneberger stated. “It is a time for real help that works for the people.”

Editor’s note: This blog has been edited to reflect HUD’s corrected statement. While President Trump initially announced that renters would see immediate relief from evictions, Secretary Carson later corrected the statement and said that the relief was only for residents of public housing. On Thursday, Carson further walked back the statement and said HUD was only encouraging public housing authorities to stop evictions.  The AP reported that Carson tweeted that HUD did not have the authority to direct all public housing authorities to halt evictions, but was seeking that authority from Congress.