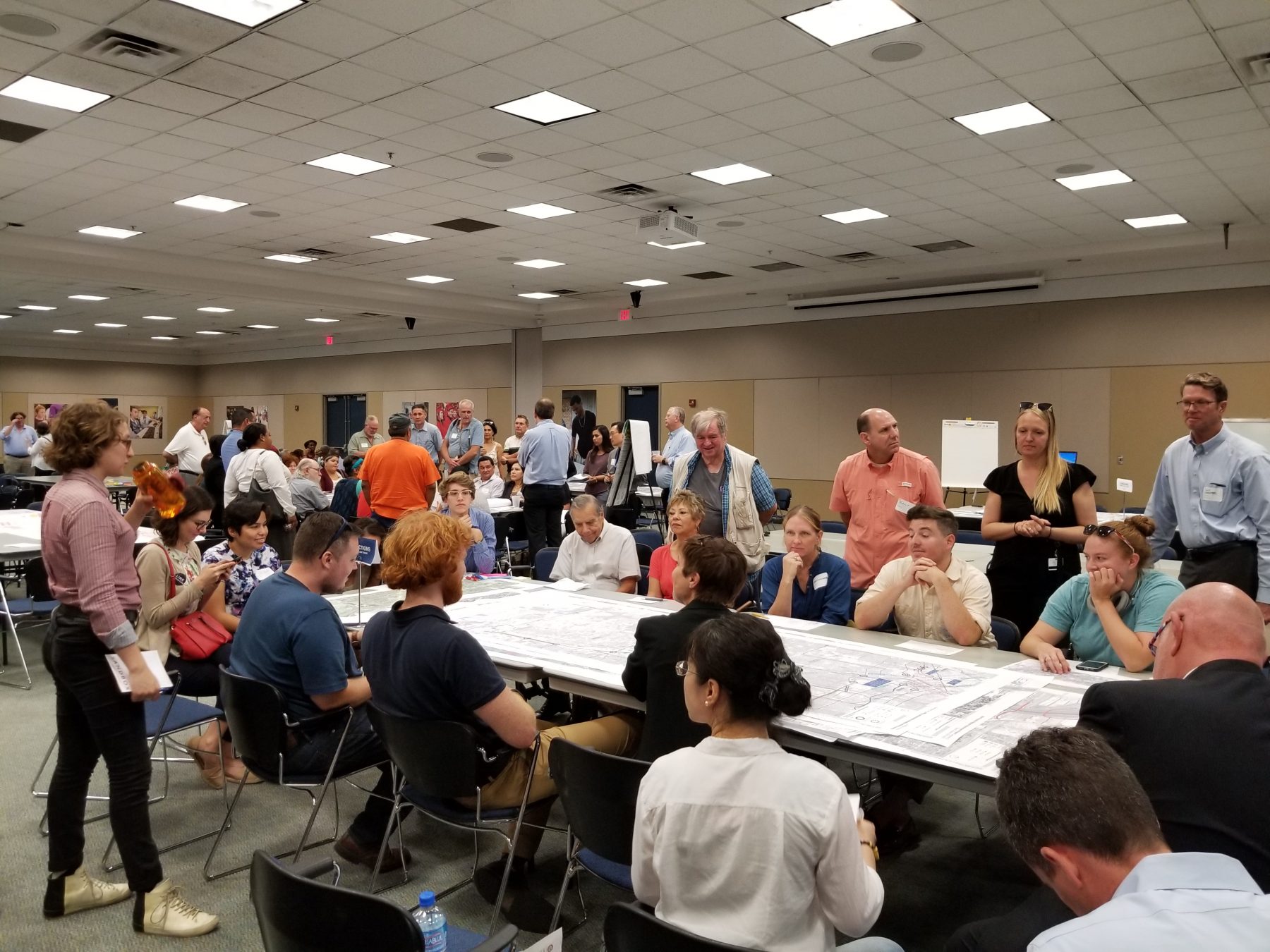 In the 1950s and 60s, when highways like I-10 and U.S. 59 were initially constructed through Houston neighborhoods, residents could first learn they were being displaced as surveyors arrived to their homes to mark up their yards for construction. In his book, Power Moves, deputy director of Rice University’s Kinder Institute Kyle Shelton cites one such historical example:

In the Fifth Ward, the predominantly African-American community that sat a few miles from downtown Houston, a hammering noise rousted Ramona Toliver from her home. Standing on her front porch a startled Toliver found the source of the noise when she observed a Texas Highway Department surveyor driving several orange-flagged staves into her front yard… Toliver confronted the surveyor, who reported that the staves marked the outer edge of the new interstate that would soon be coming through the ward. He informed her that her house and garage stood in the projected path, and that some, if not all of her property would need to be taken to make way for the road. This was the first Toliver had heard of the interstate… (55)

In 2020, as the Texas Department of Transportation (TxDOT) prepares to expand Interstate 45 North and rearrange several highways around downtown Houston, displacing over 1,000 households, the State has conducted “unprecedented listening to the community” in light of this history. Texas Housers, along with community representatives, super neighborhood presidents, environmental health advocates, transit researchers, and local residents, has written extensive comments on the Draft Environmental Impact Statement (EIS) for the highway expansion project, also known as the North Houston Highway Improvement Project (NHHIP).

This opportunity to comment on TxDOT’s plans was only made possible after decades of environmental activism and community organizing that yielded the National Environmental Policy Act (NEPA) in 1970, which requires federal agencies to seek community input on highways and other significant environmental projects.

These are the circumstances under which government should want to build roads. Community engagement should not mean checking a required box or convincing the public that a project is good, but rather it should be an attempt to understand what the public thinks is good for its own neighborhood. As it is planned, this highway expansion project is devastating to the communities it touches. It will displace huge swaths of predominantly Black and Brown populations.

Following significant public pressure, several legislators on Houston City Council — including Mayor Sylvester Turner — have said the project must not go forward unless it benefits the largely historic Black and Latino neighborhoods it will displace or impact. In a July 2019 letter to Houston-Galveston Area Council’s Transportation Policy Council, Mayor Turner explained that the City of Houston would conduct additional community engagement to inform the City’s recommendations to TxDOT. In this letter, he wrote, “It is TxDOT’s responsibility to design a project with positive impacts for the community, the City of Houston, and the greater region. We will, without hesitation, not support the funding decision in the Spring if these items are not accomplished.”

In an effort to integrate community input into its recommendations for the highway expansion project, the City of Houston planning department drafted a list of 35 alternatives to TxDOT’s “preferred alternative,” with support from design firm Huitt-Zollars and the University of Houston Community Design Resource Center. The results of the community input collected through public meetings and online participation in the past year have demonstrated that residents resoundingly want a project that is different from the one TxDOT is proposing.

On February 20, 2020, vice president and director of planning at Huitt-Zollars Christof Spieler presented the results of more than six months of community engagement at a public City of Houston Facilitation Group meeting. The slides from that presentation are attached below. In the presentation, Spieler explained the outcomes of the participatory voting that took place during the City of Houston’s public engagement process.

The results show overwhelming support for:

72% of participants chose to keep the current right-of-way, preventing displacements (alternatives 1.3 and 1.4). See the percentages for all 5 options related to highway width in the pdf below.


92% of participants chose alternative 24.1, which would guarantee a comprehensive assistance program for displaced people.

88% of participants chose alternative 25.1, which would ensure a comprehensive affordable housing program.

After sorting through the many alternatives, Mayor Turner will be making recommendations to TxDOT based on community input process later this spring. The outcomes shown here demonstrate that Mayor Turner’s recommendations should send TxDOT’s planners and engineers back to the drawing board to design a project that will genuinely improve the lives for the Houstonians who will be most affected by the project.

These plans would limit or remove displacement altogether, include comprehensive support for displaced people, and invest deeply in affordable housing, public transit and pedestrian infrastructure. Most significantly, these plans put residents first.