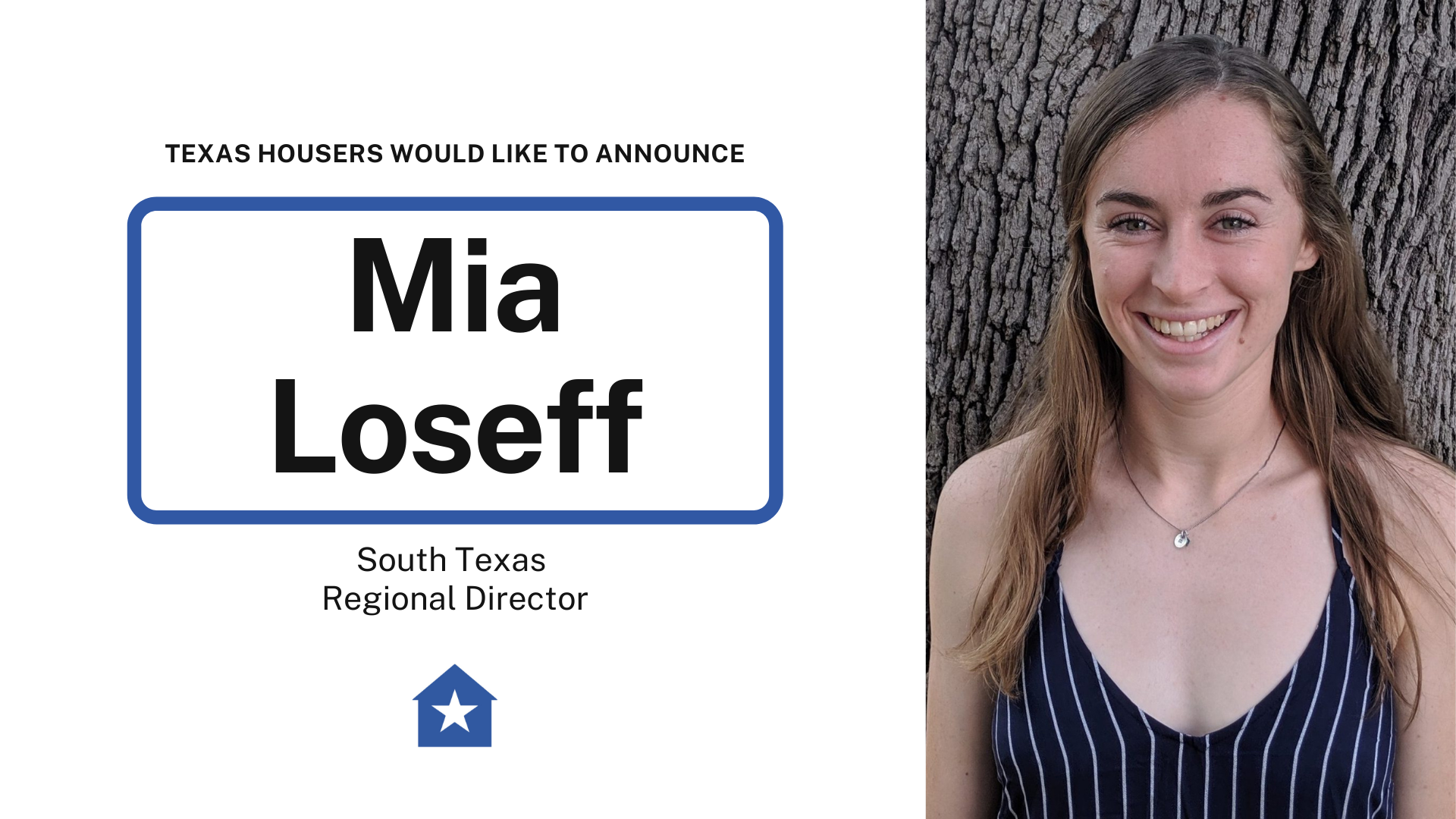 Texas Housers is proud to introduce Mia Loseff as our new South Texas Regional Director. Joining our team in 2019, Loseff has focused on increasing tenant power and amplifying the voices and needs of low-income communities and communities of color in San Antonio. This new role gives her the opportunity to lead Texas Housers’ efforts to steward tenant-led change in all of South Texas.

These past few years have brought unique pressures and struggles for low-income communities in South Texas, but Loseff says she’s drawn strength from the resilience of neighbors coming together. In particular, when they have helped each other out where local leadership has fallen short. “I’m excited to continue to work beside those who have pushed back against the ‘business-as-usual’ politics which have enabled discrimination and ignored certain areas of this city.”

The fight for a San Antonio where everyone has access to an affordable, safe, and quality place to call home has been the main goal for Loseff, and it’s been guided by community-designed action. “I love this city and all that makes it Puro San Antonio! More than anything, I’m excited to continue building on our community efforts and developing those strong community relationships that make this work so important.”

Issues that Loseff intends to tackle as soon as possible include calling for COVID relief funds and newly available housing bond monies to build back stronger than before the pandemic. “We’ve seen the City of San Antonio throw money at developers who are eager to build apartments and housing units at prices that are only accessible to individuals at the very top of the income bracket,” she says. “If we want to see change in South Texas, it is extremely important that we take every opportunity to start to chip away at the historic racial and economic segregation that is so deeply etched into the bloodline of this region. It starts with where the money is spent, and making sure need is the guiding principle.”

Many areas of San Antonio, and much of South Texas, are seeing an influx of new residents, Loseff observed, many of them whiter and wealthier than those who have lived there for generations. As these new populations move in, there has been a shift in the way public officials address – and public funds flow to – neighborhoods that have historically been neglected, segregated, and ignored.

“It is imperative that local government values, both politically and financially, the history and rich culture that exists in these neighborhoods, and recognizes that much-needed improvements shouldn’t be coming to these areas just because new populations are coming in, but because the residents that have grown up there and built their lives there are respected.”

In her new role, Loseff wants to build upon some of her proudest moments, particularly a meeting before a big community action last year. “I’ll never forget the night before our most successful protest, back in November of 2020. We had been meeting with SAHA tenant leaders almost weekly for the better part of the year, solidifying their demands for living spaces where they felt respected by staff, had property security, and were free of mold/asbestos…

One of our tenant leaders, Kayla, called around 11pm before our 9am meet up time, worried no one was going to show up. We had a pep talk and came to terms with the fact that the numbers weren’t what was going to make or break this action. It was the fact that we were leading the narrative, letting the dialogue flow with the lived experiences of residents paired with data-based expertise. The protest ended up being wildly successful, with extremely good attendance and most of our demands being met. But it wasn’t just the masses of people that got it done. It was the way the community came together and stood strong in what they were fighting for, which led others to see and believe their vision for a better future, and join the movement.”

To Loseff, housing justice in South Texas looks like safe, secure and high quality places to call home that are available in all areas of the city. It means supporting rehab efforts to save childhood homes before they are demolished, and building units that are needed for the existing community, not to appease newcomers. It looks like a thriving community who knows the power of their voice and the strength in their collective lived experience to advocate for what’s right.

Quoting a local motto that is a guiding principle for her: “Nothing about us without us, as many San Antonio community leaders say.”