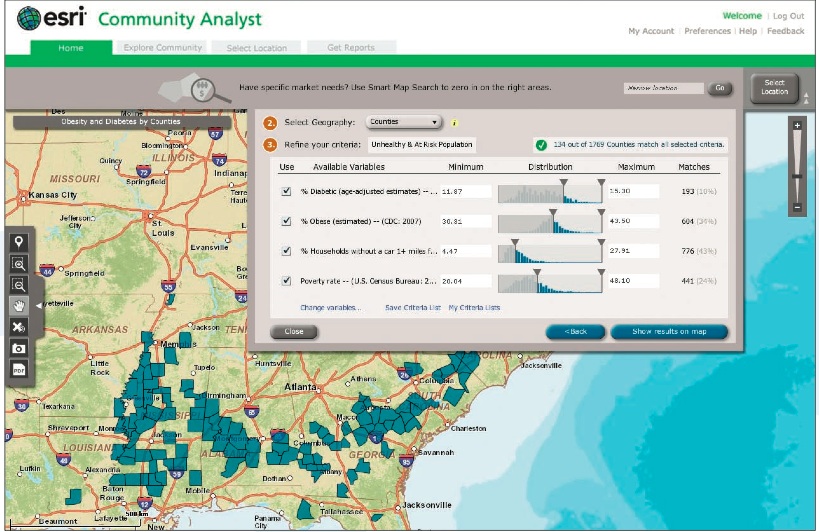 I’m not given to promoting commercial products on this blog, but I’m going to make an exception for the new on-line mapping tool by Esri called Community Analyst.

I am excited about this planning and policy tool.

If you want to see what it can do, watch this video.

Here is how Esri describes their product.

Community Analyst is a Web-based system that allows you to view and analyze demographic, public, and third-party sources of data to better understand the overall community in question and make better policy decisions.  With Community Analyst, you can understand and compare communities more deeply and on a factual level. By using the thousands of variables available in Community Analyst, you can analyze specific locations, geographic areas, or custom regions you create on the map, then relay critical information and analyses to others via maps and reports.

Esri’s business, consumer spending, and demographic data encompasses a wide variety of datasets that are updated quarterly, semiannually, annually, and decennially in the case of U.S. Census data. Esri provides current-year and five-year projections of demographic data. Several public sources of data are included in Community Analyst as well.

Government, academic institutions and policy analysts have long relied on Esri software for cutting edge mapping. Esri is a generous corporate citizen that gives away mapping software to nonprofit organizations.

I first learned about the quality and power of Esri’s flagship product ArcView when a guy from Essential Information by the name of John Brown helped me learn how to use the product in the context of mapping home mortgage loan data for our massive study of FannieMae in Dallas/Fort Worth.

As great as ArcView is, it requires some investment in time to learn how to use it. Knowing where to find the best data set for your need and managing and updating those data sets was an administrative chore that meant unless you were regularly using the mapping program you had to budget time to finding and importing new data. Another unfortunate limitation for our office is that ArcView does not run on the Mac platform — at least until we were able to install a Windows emulator.

In the past few weeks Esri has gone live with its web-based Community Analyst that solves all the problems I have with ArcView. The data sets are great and up to date (2010 redistricting data is available). The UI is as intuitive as it gets for a product that can do serious mapping.

There really is nothing like good data and a robust mapping program to give quick insights in housing, economic and racial patterns. With a few clicks I was able to quickly create a map of Rio Grande Valley census block groups where household income was $25,000 or less and the percentage of non-native born population is greater than 33 percent. The ability to target locations with particular aggregated demographics is a particular strength of the program. Another tool lets you map business and institutions based on type classifications and overlay demographics. I produced a second map showing median household incomes in Houston census block groups with payday lenders plotted as points on the same map.

Esri even offers a free trial to test it out.

Not much not to like except the price, which starts at $1,000 per year.