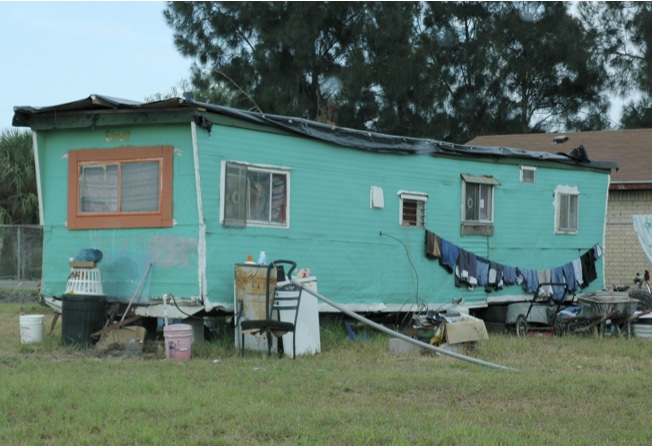 A story in today’s Texas Tribune and the Texas edition of the New York Times presents a sad and confused picture of the problems facing impoverished colonia homeowners.

Amid a number of self-congratulatory statements from well-meaning government officials here is one that stands out, “…being in public service, you have to learn the system, and be patient.”

It is easy to be patient on a state salary. It is a bit more difficult when your home floods every time it rains or your kids grow up in overcrowded and unsanitary conditions.

“The elected officials remain pretty ignorant about all these issues,” said Ann Cass, executive director for Proyecto Azteca, an organization that helps build safe and affordable homes in the Rio Grande Valley’s colonias. “There’s so much turfism, so many bureaucratic challenges.”

While a big problem, there is more behind the lack of recent progress in the colonias besides ignorance. There are discriminatory public policies.

Border cities, through public and private actions and inactions, have shown a conscious and long-standing failure to provide any significant housing opportunities within cities for the extremely poor, non-native born populations who live in colonias. Having insured lower-income, non-native born persons have no housing choices outside colonias, state, county and local governments have established and maintained colonias as state-sanctioned segregated communities where the traditional housing quality standards, financial markets and public service standards all do not apply.

Colonias are denied access to public services and infrastructure through the allocation patterns of local and especially federal funds and the related grant management practices the State of Texas has put into place along with the practices of local counties and cities.

The State of Texas’ policy of granting virtual control over the use of CDBG to the discretion of local government leaders allows local and state officials to perpetuate policies that exclude impoverished, non-native born colonia residents from their cities.

While “affordable” housing is funded by many cities, along the Texas-Mexico border it is almost never targeted at the extremely low-income populations who comprise most of the residents of colonias. Through these governmental funding decisions, cities make sure poor, non-native born populations remain economically segregated to colonias outside their boundaries. There are a few exceptions, such as the City of Pharr, which targets its housing funds to families earning less than 50 percent of AMI.

The pattern and practice of government NIMBY is also reflected in the extremely low per capita availability of public housing and Section 8 Housing Choice Vouchers in Texas border cities. This is a legacy of a time when local government leaders refused to take part in and/or make application for housing assistance in furtherance of a policy of exclusion of low-income immigrants from their cities.

Through state policies, for many years housing tax credits and mortgage revenue bonds also did not serve the border, leading to a massive affordable housing deficit. Housing funds are still not allocated to the border region in proportion to need. With hundreds of millions in Low Income Housing Tax Credits the State of Texas is posed this month to fund five new apartment projects in Houston and not a single home in the Lower Rio Grande Valley.

State of Texas policies in administration of tax credit and MRB programs reinforce the practice of denying residents of colonias housing opportunities outside colonias. The State of Texas maintains policies that keep rent levels in these state funded “affordable” apartment developments at rents well above those affordable to most residents of colonias.

Discriminatory and exclusionary housing patterns are entrenched in practice and tradition. As border cities grow in relative share of the area population, they have more discretion to decide how CDBG funds are allocated under the CDBG allocation system.

Some border HUD CDBG entitlement jurisdictions also provide some funds for housing within their urban areas. These are excellent programs, but they generally do not target very low-income people, but provide the majority of funds to higher income (80% AMFI) homebuyers and are therefore unaffordable to colonia residents.

CDBG funding decisions at the state and local levels have disproportionately disinvested or “red-lined” colonias. This is particularly egregious in the failure of local governments to provide funds for drainage improvements to colonias.

Counties regularly fail to prioritize colonias that lack any engineered storm water drainage for funds while directing CDBG funds instead to improving existing local and regional drainage infrastructure. Given the fact colonias are overwhelmingly the communities that flood the worst, this contributes directly to the increased impoverishment of the colonia residents and the further ghettoization and segregation of the colonia populations.

I know someone is going to post a comment saying that all colonia residents are undocumented and tax money should not be spent in colonias. Let me save the anti-immigrant readers the trouble.
.
You are wrong. Some residents of colonias are undocumented, most aren’t. A great many of those who are undocumented have lived in this country for years, work hard, pay taxes and have kids who are citizens and who are legally entitled to protections and equal treatment under the law.
.
Besides, they are paying property and income taxes that are used to improve other people’s communities.
.
There are undocumented people in the community where you live.  So, shall we just stop providing streets, water, sewer and drainage for your community?
.
[Sorry for the aside, but I’m losing patience with the generalized racism that gets spewed at all Hispanic Texans with low incomes].

Alix Flores, the community development director for the Brownsville Community Health Center said changes [in conditions in Texas colonias] did not come through sweeping government grants or benevolent agency officials — they came through community mobilization. Residents became activists for improving their conditions, registering 7,000 people to vote over the course of a few years and holding elected officials accountable for changes. “It’s really about helping families empower themselves, helping them understand they can demand things from the state and federal government,” Flores said.

Alix Flores and Ann Cass are both right. Progress for colonias will not occur through often ignorant government officials counseling suffering families to be patient.
.
Progress will occur through organized civic engagement on the part of the residents of colonias.

1 comment on “What really impedes progress in Texas colonias?”