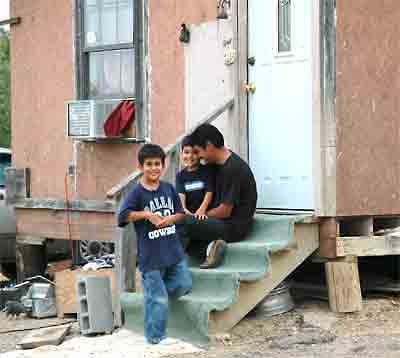 Whoever at CNN wrote the headline above does not understand what happened in the Las Lomas colonia.

Today CNN ran a lengthy story about a  Starr County, Texas colonia that I have followed for the past nineteen years. There has been genuine progress in Las Lomas over the past two decades. The CNN story correctly captures that.

This story, far more upbeat and hopeful that yesterday’s Texas Tribune story, is a great illustration of the power of an organized community of colonia residents to bring change and improvements.

While the story is largely told through the words of government officals and academics, if you read carefully you can see who the residents of Las Lomas credit for bringing the improvements.

[Las Lomas colonia resident Gavina Barrera] credited the community center, Colonias Unidas, with bringing basic necessities to the neighborhood and rallying residents to work together to build up the community.

“We’ve struggled with water. In ’89, we went a year without water. We asked our neighbors for water or we carried it here. But then we got water, thanks to Colonias Unidas. The same with the trash and then we got containers and tanks.”

I’m not suggesting that government did not have a major role. The federal and state funds paid for many of the improvements.

But it is important to appreciate that most reporters rely on government and academics to tell the stories and how the perspective of low-income community residents is often quite different from those of outsiders. Improvements in the colonias should more often be credited to the work of colonia residents, not simply assigned to the generosity of public officials and outside institutions.

When you ask bureaucrats and politicians to tell a story it is only natural for them to tell it through their experience and for their benefit. When you want to know the real story, you need to dig a little deeper.

One of the real heroines behind the progress made in Las Lomas is not credited by CNN.

Blanca Juarez is a Las Lomas resident and a founder and long-time president of Colonia Unidas. The nonprofit, community controlled organization is a textbook example of community organizing leveraging community improvements and vice versa.

Most major improvements in Las Lomas began around a folding table in the Colonias Unidas community center. For example, Blanca joined with a number of colonia residents to successfully convince the State of Texas to pass the Colonia Fair Land Sales Act back in the 1990’s.

We made a video way back then of Blanca describing the problem her colonia and she personally were having getting deeds to their lots. The video was presented as testimony supporting that legislation.

I wrote yesterday that change in the colonias cannot be expected to come by waiting for government officials and programs. Las Lomas changed because Blanca and the members of Colonias Unidas organized and engaged county, state and federal officials to demand change.

In the 1990’s, I remember Blanca and her neighbors carrying picket signs outside the Texas Attorney General’s offices under Austin’s blazing summer sun. They were there to shame the AG to force the developer of Las Lomas to give people the deeds to their property after they paid off their lots.

Ask any resident and they will point out there are still a lot of unmet community needs. Jobs, housing, community safety, health, education are better than they were, but still far worse than what most Americans take for granted.

Blanca Juarez would be the first to point out what still needs to be done. She continues actively working for justice for colonia residents today.

She and the members of Colonias Unidas know how to make a better town — you organize a strong community.