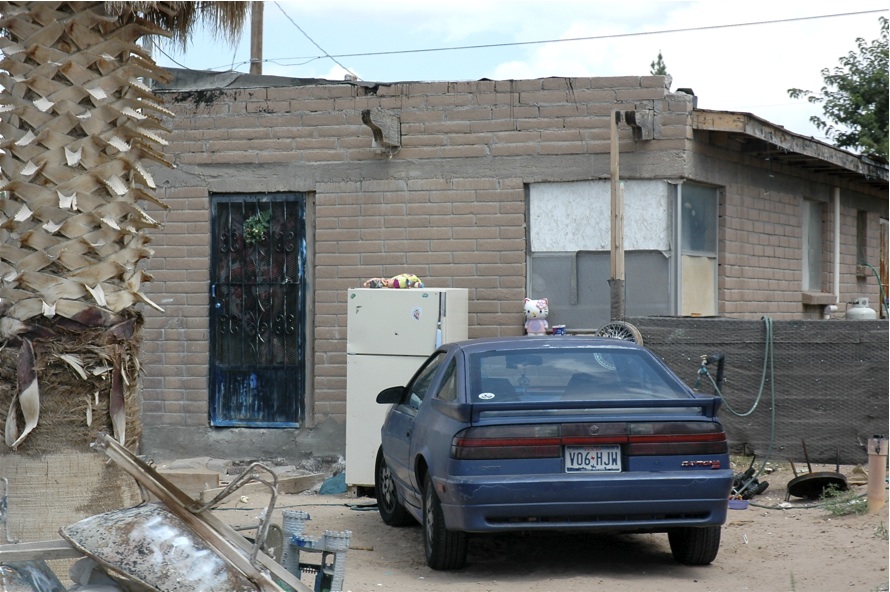 Earlier this week I spoke to the National Association of Latino Community Asset Builders about developments during the last session of the Texas Legislature that impacted colonias. These are my prepared remarks.

The situation faced by those of us who work on affordable housing and community development issues along the Texas Mexico border can be summarized in four broad statements:

Let’s explore each of these in more detail.

1) Living with and holding onto a stopgap regulatory approach to low income community development.

The State of Texas principal initiatives of community development along the Texas Mexico border consists of trying to restrict the development of new subdivisions for low-income people rather than trying to provide good alternatives to colonias.

The State’s approach is trying to restrict further development instead of improving conditions.

The effect of the model subdivision rules, and the requirement to “build it or bond it” have been to both greatly restrict the development of colonias that lack public infrastructure and at the same time significantly increase the cost of lots within the subdivisions.

During the 2011 legislative session, a group of colonia developers attempted to change the provisions of the law by modifying the penalties for noncompliance. Advocates for colonia residents vigorously opposed the weakening of these laws as did most border region legislators. The effort was defeated.

The attempt to weaken these laws reflects the broader antigovernment sentiment that exists today.

The question is how long can a stopgap regulatory approach be relied on as the primary vehicle for land-use control along the Texas Mexico border.

For two decades the model subdivision rules have kept a lid on the further development of substandard subdivisions. The result, as I noted earlier, is that lot prices are now well beyond the reach of many low income families along the border. With the absence of any affordable rental housing alternative for the poor, buying a lot in piecing together a home remains the primary option for the large population of poor families in the border region.

The failure to provide affordable rental housing, and the concurrent reliance upon property purchase and owner builder homes raises and unaddressed policy question. Given that the extremely low income new homeowners lack the resources to build adequate housing, what is the proper role of government regulation in housing development?

The State of Texas generally prohibits counties from enacting or enforcing building codes. It also prohibits these counties from enacting land-use controls and zoning beyond basic subdivision rules. The result is that owner-builder housing by the poor is often non-code compliant and, over at least a protracted initial portion of the life of the house during which it is slowly constructed, the condition of the house poses significant physical hazards to its occupants.

Within governmental, planning and low income housing circles in the border region there are widely varying opinions regarding whether government should impose building codes, land-use restrictions and zoning within unincorporated areas to address these hazards. After careful consideration, my organization has come to believe that it should. But we respect the fact that others disagree, including perhaps most residents of the colonias themselves.

This is a situation which should be debated and resolved once and for all. The rate of growth in the border region, while slowed somewhat in recent years, will remain high for a long period of time. The Hidalgo County–Cameron County area is developing into a denser metropolitan region. Development of new residential areas in colonias outside of incorporated cities with housing that does not meet building codes poses a significant long-term challenge to the region that must be addressed.

State and local government administration of Community Development Block Grant funds, as well as other federal development block grants, has been haphazard and at times noncompliant with federal statutes. This has led to the inefficient use of these funds, which today constitute a majority of the financial resources available to address low income community development and housing in the border region.

For example, the State of Texas has prioritized water and sewer services or activities funded with the 10% CDBG colonias set aside. While a reasonable approach on its face, the end result has been that colonias often do not get critical public services beyond basic water and sewer. There are not enough federal CDBG funds within the colonias set aside (about $7.5 million per year) to even keep up with the demand for water and sewer. Colonias in lower Rio Grande Valley counties that desperately need basic storm water drain systems are not able to access these federal funds for that purpose. The result is that with each rain the communities and the housing located in them flood.

We are bracing for federal budget cuts that will doubtless affect the Community Development Block Grant program, further reducing the availability of funds to provide public infrastructure. Currently, the state allocates no CDBG funds to deal with the massive needs to address the quality of housing in the border region.

The Texas Bootstrap self-help housing program is the state’s initiative to provide housing assistance to extremely poor homeowners who agree to contribute a substantial portion of their labor to building their home. This is an extraordinarily important program. Yet, it has been complicated by bureaucratic requirements imposed by the administering state agency. Repeated attempts by legislators, especially Sen. Eddie Lucio, the father of the bootstrap program, have been unable to get state agencies to build the capacity of the program to expand it to serve more persons in need.

With the draconian budget cuts enacted by the 2011 Legislature, funding for the bootstrap program has been significantly reduced.

The high number of home foreclosures, while devastating to families who lost homes, has provided a small pipeline of affordable housing in recent years. But what happens when the foreclosure pipeline dries up? What happens as capital becomes more available and predatory lenders ramp up a new approach to subprime lending? These are all serious questions that deserve to be addressed.

And perhaps, most important of all, what happens when the federal government defunds the USDA Section 502 direct mortgage loan program? With the exception of the Bootstrap loans, this is the only mortgage loan product affordable to most farm workers and very low income border families. Incredibly, the Obama administration Department of Agriculture has proposed the virtual defunding of this critical affordable mortgage program, along with elimination of funding to support the administration of self-help housing programs.

I’ve already discussed problems related to policies and the implementation of the Colonia CDBG set aside. But there are other challenges with state and local administration of federal funds for housing and community development.

CDBG Hurricane Dolly disaster recovery funds are an example. We have spent a substantial amount of time and resources understanding the regional drainage projects which were prioritized in the Rio Grande Valley as recipients for Hurricane Dolly recovery funds. For the most part the approach has been to use the funds for regional drainage projects and not target them to principally benefit low and moderate income residents living in the worst flooded areas, i.e. the colonias.

We have reviewed the history of the CDBG funding decisions within both entitlement and non-entitlement jurisdictions in the Rio Grande Valley and the pattern that emerges is that colonias in unincorporated areas are underfunded. These are local political decisions which should be reviewed and reconsidered.

The Texas Legislature this year transferred authority to administer Community Development Block Grant funds from the Texas Department of Rural Affairs to the Texas Agriculture Commissioner. I should point out that we have often been critical of the administration of the CDBG program within the Department of Rural Affairs. But local officials we have spoken with have uniformly expressed their concern that the transfer to the Agriculture Commissioner will reduce the funding emphasis away from community development activities. This remains to be seen.

4) Being buffeted with new anti-immigrant sentiments that reduce support for border programs.

For many years Texas avoided the type of nativist prejudice that has infected a number of other states. The critical role of immigrants within the Texas economy has moderated these attitudes. But there has been explosive growth in anti-immigrant sentiment that has now manifested itself as a significant political force within the Texas Legislature.

Several members of the legislature have expressed a desire to cut off all funding for the colonias in an incorrect belief that all colonia residents are undocumented immigrants. There has always been latent prejudice directed at the border’s predominant Hispanic population. The difference this legislative session is that it came out into the open and expressions of these attitudes came to be tolerated.

To a large extent, border representatives in previous sessions have been allowed to decide what is best for the border region (at least until they tried to make the case for more resources). That is less the case anymore. Initiatives are filtered through a screen of anti-immigrant prejudice. The result has been to put into question continued funding for colonia self-help centers, special staff within the Secretary of State’s office to oversee colonia initiatives, etc.

I realize I have not painted a hopeful picture. There are a huge number of longtime, unaddressed problems facing housing and community development in the border region. These are complicated by historical underfunding of programs, looming federal budget reductions, and an ugly and growing anti-immigrant attitude on the part of some in the public and an increasing number within the legislature.

But the border has some things going for it that should make us hopeful. It has seasoned political leadership which is effective in the legislative process and understanding and sympathetic toward the needs of the poor. Sen. Eddie Lucio has long been one of the foremost advocates for protecting the poor and improving the lives of Colonia residents. Sen. Hinojosa, from a critical role as vice chairman of the Senate Finance Committee, oversaw important legislation concerning housing and community development programs. Sen. Zaffirini has a deep and long-term commitment to dealing with both the problem of the proliferation of colonias and the provision of adequate infrastructure. The border House members also have an understanding and commitment to overcoming the unique challenges of the border region.

Community organizations have emerged to give voice to colonia residents. In the Rio Grande Valley, Valley Interfaith has long been concerned with colonia issues. The Equal Voice Network has done incredible organizing directly engaging the poor. They are capable of turning out of thousand people at a given event. The combination of civic engagement within the community and effective political leadership will be essential in making sure that the huge challenges faced by the border are successfully addressed.