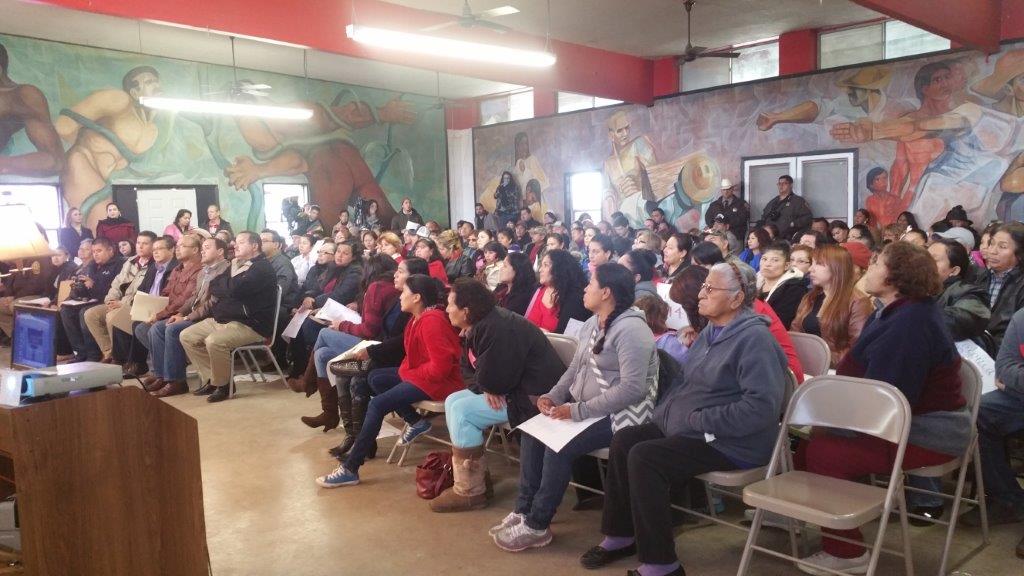 Last Thursday our partners in the Rio Grande Valley, La Union del Pueblo Entero (LUPE) and A Resource In Serving Equality (ARISE), organized a meeting to impress upon Hidalgo County officials the importance of streetlights in the area’s colonias. The event proved to be hugely popular – more than 200 residents from more than 50 colonias were in attendance – and resulted in an historic agreement by county commissioners to begin work on a pilot lighting program within 30 days.

Eighty-seven percent of colonias in Hidalgo County are without streetlights, a dangerous failure of infrastructure that leads to accidents, crime and a feeling among community members that they are unsafe in their own neighborhood. Many colonia leaders presented their testimonios at Thursday’s meeting, bringing their case before representatives of the four county commissioners, the tax assessor and the sheriff’s department.

Hidalgo County has planned to implement a half-million-dollar pilot program to provide some lighting to colonias, but county officials wished to install solar powered lights that are costly upfront, which means the county could not afford as many lights, and do not provide as much illumination as a traditional streetlight. In speeches before the packed house last week, colonia leaders stressed the need for regular LED streetlights that would provide more light in more locations. Officials committed to provided conventional streetlights rather than solar lights.

Residents asked that the pilot program be initiated in the next 30 days in colonias that already have some lighting infrastructure such as poles, and county officials agreed. County Commissioner Joseph Palacios promised to present the pilot program to the Commissioners Court within a month. Once the program is approved, the county will need to sign new electrical contracts to install the new lights.

LUPE and ARISE, both members of the Equal Voice Group in the Rio Grande Valley, have worked long and hard to bring light to the colonias. The huge turnout at Thursday’s meeting is a testament to their work and to the importance of this issue on people’s lives.