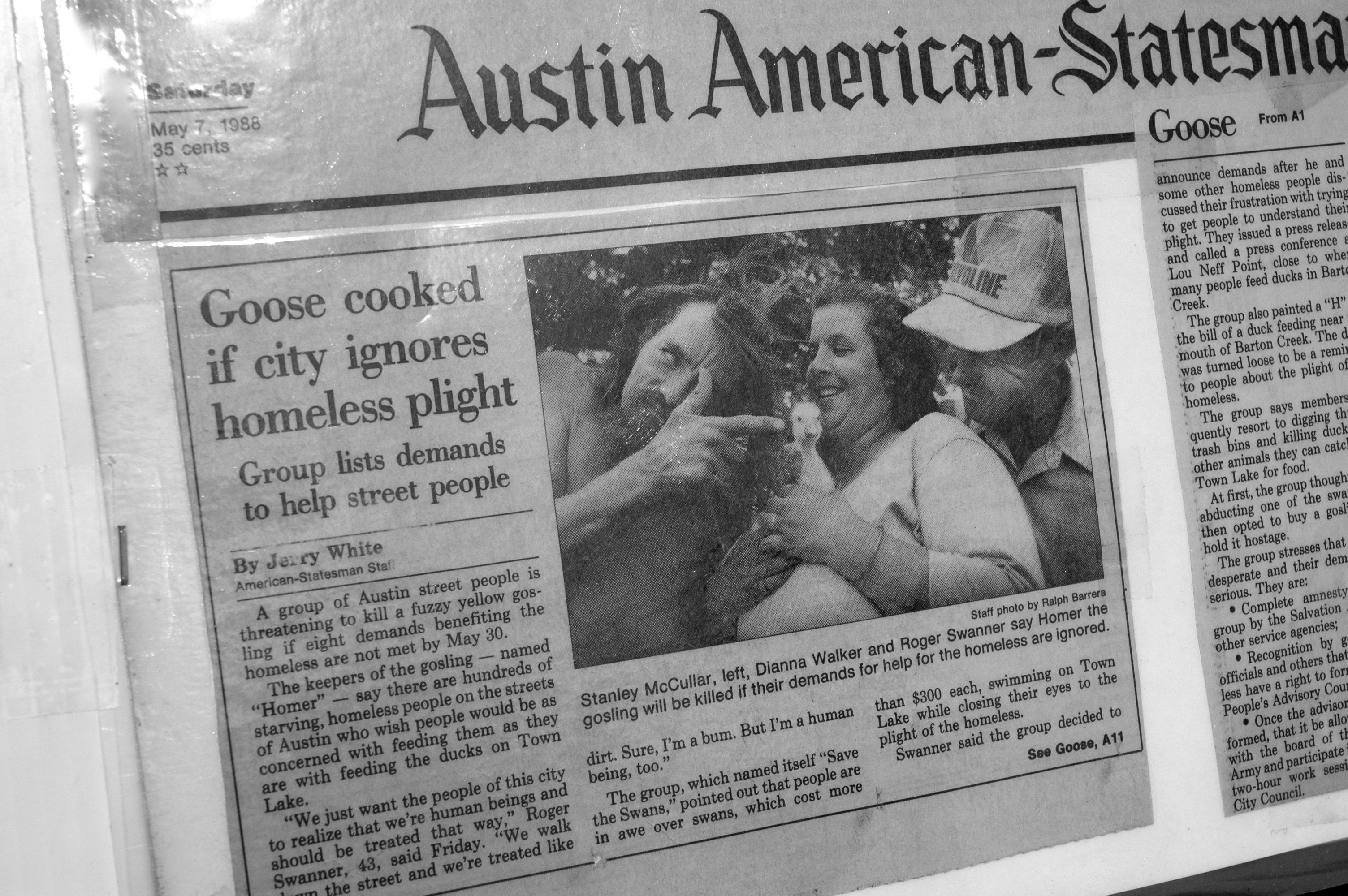 Homer gained national acclaim in 1988, when a group of advocates for the homeless bought him for $16.87 and threatened to eat him unless the City of Austin met their demands. But Homer did not end up as dinner. Instead, he became a mascot for homeless rights in Austin and beyond – and made it all the way to the floor of the 1988 Democratic National Convention in Atlanta.

The Street People’s Advisory Committee, or SPAC, began as a way to help give Austin’s homeless community a voice at City Hall. Homeless members organized and came up with a list of demands, including a more permanent arrangement for safe places to camp and live. SPAC thought an unorthodox publicity strategy would grab the city’s attention. The original idea, to kidnap one of the Town Lake swans, was illegal. The follow-up idea, to purchase a swan, was too expensive. And thus Homer became the cheaper, legal option.

He was a hit right away. Homer accompanied SPAC members to City Council meetings and press events. He lived on a styrofoam boat on Town Lake, the S.S. Homer, with one of SPAC’s leaders, and made it onto CNN and Good Morning America. He was arrested for civil disobedience during a housing protest. And when Homer’s friends wanted to make homeless rights a focus of the presidential campaign, the Democratic Party paid to fly him – and no one else – to Atlanta for the DNC.

You can get the full story of Homer’s exploits, and how they helped lead to the creation of low-income and transitional housing in the Blackland neighborhood, from an oral history that we compiled in 2000.

After all the excitement, Homer lived for many years with Lori Renteria, a longtime housing advocate who originally organized SPAC. In 2006 he moved to the Austin Zoo. Homer survived a bout with cancer two years ago, and, according to the Austin American-Statesman, died peacefully in his sleep on March 15. This past weekend on the shores of Town Lake, a large group gathered to pay their respects, including Austin Mayor Steve Adler.

We bid a fond farewell to Austin’s most famous and important goose. Rest in peace, Homer.