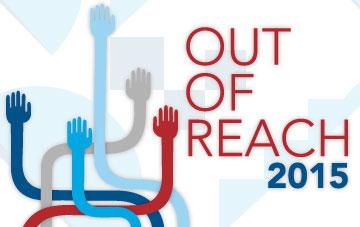 On Tuesday the National Low Income Housing Coalition (NLIHC) released its annual Out of Reach report, an important look into the burdens that housing costs place on low income families.

As a state partner in the NLIHC, we’re committed to using the data in Out of Reach 2015 to contextualize our work to expand housing options for low income Texans. Texas ranks 22nd in the nation in “housing wage,” or how much someone needs to earn in order to afford rent and utilities. It’s the average hourly wage needed for a two-bedroom rental at average Fair Market Rent (FMR), working a standard 40-hour week and without dedicating more than 30 percent of income to housing. An alarming but not altogether surprising revelation: Nowhere in America do minimum wage workers earn enough to afford a decent one- or two-bedroom apartment.

Good luck finding a decent rental home in the Austin area at that price. Of the five most expensive counties in Texas for renters, four are in the area around the state capital (the highest housing wage is in Midland County in West Texas). The housing wage needed to live comfortably in the Austin-Round Rock Metropolitan Statistical Area (MSA) is $20.19 – the equivalent of 2.8 full-time minimum wage jobs for a two-bedroom at FMR, or 112 work hours a week.

(An important note: While the report also lists the housing wages for studio, one-bedroom, and three- and four-bedroom apartments, it uses two-bedrooms as the baseline for two reasons. One, the most reliable data is for two-bedroom homes. And two, the report is meant to highlight what it takes for a working family to afford a decent standard of living. Many more families rent homes than buy, so the affordability of two-bedroom rentals is a very real question for American families.)

Let’s take a look at the Out of Reach data for minimum wage earners around some of the state’s largest cities (you can do the same at the interactive Out of Reach website). Keep in mind that just last week, the Texas House of Representatives rejected a proposal that would have let state voters decide whether or not to raise the minimum wage to $10.10.

Out of Reach 2015 points to the urgent need to expand the housing options affordable to low income families. Last week, a committee in the U.S. House of Representatives voted to defund a federal program, the National Housing Trust Fund (NHTF), intended to do just that. NHTF could provide Texas with more than $10 million in 2016, dedicated for programs that expand housing for extremely low income renters. NLIHC calls the trust fund the strongest solution to the country’s shortage of affordable housing.

There’s also a common misconception that most minimum wage jobs belong to teenagers working after school, who aren’t the heads of households or dealing with rent. That just isn’t the case. Minimum wage work is the reality for hundreds of thousands of Texans and millions of American adults. According to the Economic Policy Institute, 78 percent of American minimum wage earners work at least 20 hours a week and 80 percent are at least 20 years old. The Council of Economic Advisers found that the average minimum wage worker is 35 years old, and that more than a quarter have children.It’s also important to remember that, according to Out of Reach, the average American wage earner only works 34.4 hours per week, not the standard 40. Housing wage calculations are based on a 40-hour work week, 52 weeks a year. It can be extremely difficult for low income households to put together enough working hours, with no time off, to afford what the rental market has to offer – doubly so for low income single parent families.

The data is clear: There’s a critical need for more funding for affordable housing at the federal, state and local levels. A single mother in Austin shouldn’t have to work three jobs just to afford a decent apartment. Minimum wage earners shouldn’t have to choose between spending more than half their income on rent or working almost 100 hours a week. A decent, affordable place to live does not have to be out of the reach of low income families.