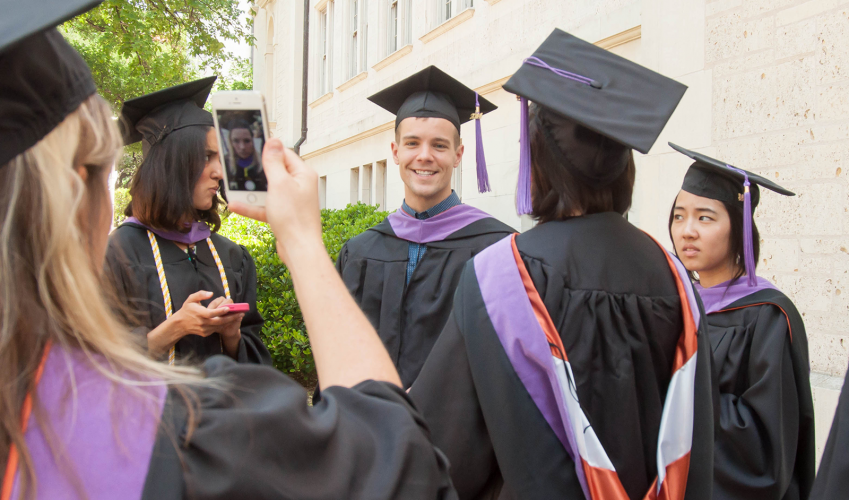 Yesterday I had the honor to deliver the keynote speech at the 102nd commencement ceremony for the School of Architecture at the University of Texas at Austin. I was inspired and deeply moved to sit on the stage with the talented faculty and watch more than one hundred graduates, including a great number of international students and students from the US-Mexico border region accept their hard earned degrees.

I have been wondering whether our universities really equip graduates to take on today’s social problems. Do degree programs leading to professional occupations like law and architecture track students too narrowly into their vocations instead of helping graduates find their roles and their voices as engaged citizen problem solvers?

I am still searching for an answer. But I came away encouraged that the University of Texas School of Architecture has sent a racially, ethnically and gender-diverse group of graduates out into the world to search for answers. The students are hard-working, smart and they look like Texas.

And like the graduating students, I walked away from commencement proud of my university.

Below are my remarks at the ceremony…

Our University of Texas proclaims that,

“We are a catalyst for change.”

“We are driven to solve society’s issues.”

“What starts here changes the world.”

I’m going to share with you some practical advice I got from a Texan icon about changing the world.

I got this advice in 1960, at the Majestic Theater in downtown Dallas. Etched into my impressionable, five-year old Texan brain was the image of John Wayne, playing Davy Crockett in the movie The Alamo.

Davy is explaining to his romantic interest why he is choosing to abandon her to stay and fight, and surely die with the defenders of the Alamo.

Let me pause here to acknowledge that the epic John Wayne movie “The Alamo” is marred by imperialism and racism.

But, let’s not dwell on that now, relying on the advice of the late, great Texas naturalist and University of Texas scholar Roy Bedichek, who once advised, “never let facts stand in the way of truth.”

So John Wayne looked down from the screen and like Moses bringing the tablets down from the mountain to the Israelites, he handed me a blueprint for life in these words…”When I came here to Texas I was looking for something. I didn’t know what. It’s like I was empty somehow. Well, I’m not empty any more. That’s what’s important. To feel useful in this old world. To hit a lick against what’s wrong or say a word for what’s right even if you get walloped for saying that word.”

I call this philosophy “What would Davy do?”

1. You need to learn how to do something that interests you.

I presume you have found that architecture and planning really interests you, (or else you just wasted a lot of time and money here).

2. You have to look for a life purpose that is personally satisfying.

3. Then live your interesting and satisfying life in a way that, as Davy says, makes you, “feel useful in this old world.”

Starting with my undergraduate work on this campus, what has interested me — what I’ve found satisfying — and how I have managed to “feel useful” — is working alongside low-income, community leaders of color to solve problems of housing affordability, fair housing and neighborhood inequality in Texas.

You are going to have to face these problems also.

As you design buildings, and homes and plan communities you are creating the stage on which society’s most basic problems will either be maintained or be overcome.

These problems are profoundly affected by the built environment — in middle and upper income communities of exclusion,— as well as in distressed neighborhoods of Ferguson, Baltimore, and South Dallas.

I have come to believe segregation — the practice of setting people apart from others —  is one of society’s core challenges.

You work in a profession that must contribute a solution.

A landmark study by The Harvard Equal Opportunity Project, released just this month, shows how strongly children’s futures are shaped by where they grow up. Spending a childhood in a neighborhood that’s racially segregated, economically impoverished, with failing schools and high crime, reduces a low-income family’s total lifetime earnings by, on average $198,000.

Growing up in a distressed neighborhood, in other words, makes it likely you’ll stay poor, and makes it very hard for a poor child to attend and graduate from this university.

To design and build in a way that maintains the status quo and consigns future generations of children to grow up in distressed neighborhoods is morally irresponsible.

Who is going to speak truths like this? I’m saying, it needs to be you.

In the wake of Ferguson and Baltimore, architectural and planning students at Harvard’s Design School have called for a course in policy research and leadership on race, inequality and poverty.

Our academic institutions haven’t done enough to equip us to solve these problems. I urge this School of Architecture to offer such a course to its future students. But I trust what you have learned here, coupled with your deep engagement in your community and your commitment to reach across barriers of race and class will equip you to take on these issues.

Big commissions are offered for designing buildings that are monuments to corporations and the wealthy. With some effort, you can find interesting, satisfying and useful ways to put your talents to work, even in those projects, toward solving important social problems.

Always be open for opportunities “to say a word for what’s right.”

I’ve worked with many architects, planners and interns who find this type of problem solving is the highest calling of their profession and one of the most satisfying activities of their lives.

My friend Tom Hatch is an architect here in Austin. He dedicates a substantial part of his practice to designing affordable housing through community development corporations. Tom knows that as a respected architect in this community, his public advocacy for decent homes for poor people, integrated into healthy and diverse communities, oftentimes needs to precede his housing design work. The architectural community agrees and named Tom a FAIA — a fellow of the American Institute of Architects for that work.

I’ve worked on disaster recovery housing with a class of very smart graduate students here in Community and Regional Planning, with the nonprofit community planners at Building Community Workshop from Dallas and with the residents of impoverished colonias where the Rio Grande empties into the Gulf of Mexico.

Together, we created a way to more rapidly rehouse low-income families after disasters. This solution grew from our design competition that involved 83 teams of architects across Texas. Right after a disaster, families move into a modular home that is quickly built out into a permanent one. The permanent house hardly costs more than the government spends today to give survivors a temporary FEMA trailer.

But once again, a design solution is not enough. Government agencies originally insisted that the homes of poor families be rebuilt on the site of the original destroyed home, regardless of whether it was in an area of environmental hazard, blight or extreme poverty. We responded with a fair housing complaint and got that fixed so every disaster survivor now is given the choice to stay or to move to a better, safer neighborhood.

We had to fight for funding to build 23 of these houses for low-income disaster survivors to test it out. We got the money, we built the homes and it works. Now we are working with the Legislature to put this in place statewide. I can’t tell you how excited the architects, planners, colonia residents and the rest of us are about this. This is one of the things the MacArthur Foundation cited when they awarded me a MacArthur Fellowship this year.

I also worked with architects and the parish board of a small Hispanic Catholic Church in the Texas Panhandle to build housing for farm workers. The very idea that low-income Hispanic farm workers should have homes in this overwhelmingly Anglo, small town was controversial.

The biggest problem was not design but local NIMBY attitudes. It took three years of dialogue to overcome the opposition, but the result is the finest multi-family housing in the region.

Twenty-five years later, it looks as good as the day it was built, and Hispanics and Anglos, including a former farm worker living in the development, now serve together as local elected officials.

You must face the underlying problems before you design.

For example, the history of public housing teaches us that an architectural solution can’t overcome a flawed housing policy based on racial and economic segregation. No one wants to be the architect responsible for the next Pruitt–Igoe.

In contrast, the housing development for farm workers in the Texas Panhandle succeeded, because it is a beautiful and functional design and an element in a concerted effort to bring a community together. It took both for that project to be a success.

What I am saying is, lead your clients to face the underlying issues that will decide the success or failure of their project and its impact on society — issues that perhaps they don’t initially perceive. Challenge your clients: “Are we displacing the poor from a gentrifying neighborhood with this new development? Are we proposing a master plan that fails to provide affordability incentives, and thereby increases segregation and inequality?”

If so, Davy says, “hit a lick against what’s wrong or say a word for what’s right even if you get walloped for saying that word.”Speaking truth to those in power will often put you in places where you are vulnerable. Not as vulnerable as Davy Crockett at the Alamo, but you’ll get walloped from time to time.

But, seek out the higher purpose of your profession and your life. What Samuel Mockbee, the great public-interest architect who founded the Rural Studio in Alabama, calls “shelter for their soul,” homes and communities to benefit and beautify lives, to democratize and diversify our community.

John Wayne, sums it all up in the conclusion of his Alamo soliloquy.“Now I may sound like a Bible-beater yelling up a revival at a river-crossing camp meeting, but that don’t change the truth none. There’s right and there’s wrong. You got to do one or the other. You do the one and you’re living. You do the other and you may be walking around but you’re dead as a beaver hat.”

Use what you learned here.

Act on your commitment to your community, and what your sense of social justice speaks to you to do.

Strive to be what your university says you are — driven to solve society’s issues — a catalyst for changing the world.

Thanks for hearing me out, and congratulations.