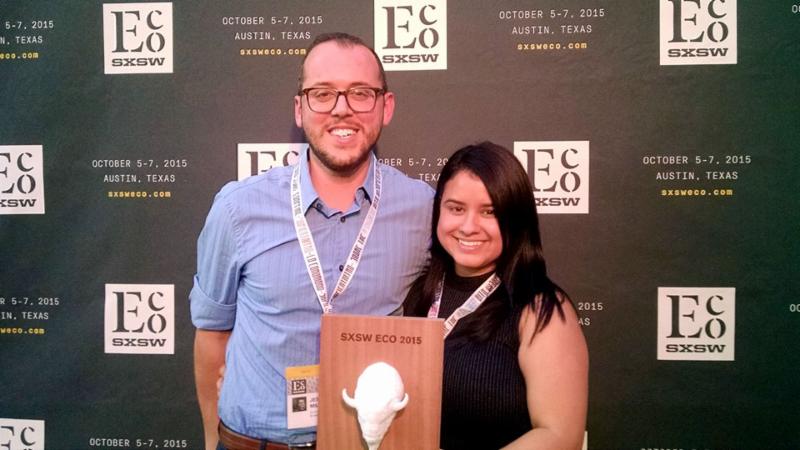 Above: Jesse Miller and Elaine Morales of buildingcommunityWORKSHOP with their SXSW Eco award.

We are thrilled that RAPIDO, the innovative model for disaster recovery housing developed by our friends at buildingcommunityWORKSHOP ([bc]), was recognized with a Social Impact award for Place By Design at the 2015 SXSW Eco conference, which concluded on October 7 in Austin.

RAPIDO is a crucial piece of the Disaster Recover Housing program that we helped develop with our partners at [bc], the Hazard Reduction and Recovery Center at Texas A&M, Community Development Corporation of Brownsville, La Unión del Pueblo Entero and A Resource In Serving Equality. With the great support of the State of Texas, we helped organize a committee to address Texas’ problems with disaster recovery after Hurricane Dolly struck the Rio Grande Valley in 2008. In need of a rapidly deployable disaster rehousing system that would benefit low income populations, we began to collaborate on RAPIDO.

It is a model for quick, low-cost housing rebuilding in the wake of disaster, in contrast to the slow and inefficient way that homes are typically rebuilt after damaging storms, which leaves low income families vulnerable for months and sometimes years as they wait on much-need repairs and rebuilds.

The RAPIDO model is a temporary-to-permanent housing design prototype, so that families can move back into module shelters in a matter of days while a new, innovative and collaboratively designed home is built out around it. You can learn much more about RAPIDO at [bc]’s website, as well as see photos of the RAPIDO homes built during the pilot program, which housed several displaced Rio Grande Valley families in beautiful new temp-to-perm homes. Public Radio International also covered the program in April.

[bc] also won a SXSW Eco award in 2014, for their Libros Libres initiative, a book shelter program in Dallas. Truly, we are fortunate to work with such outstanding, community-minded partners. Congratulations to the entire [bc] team!