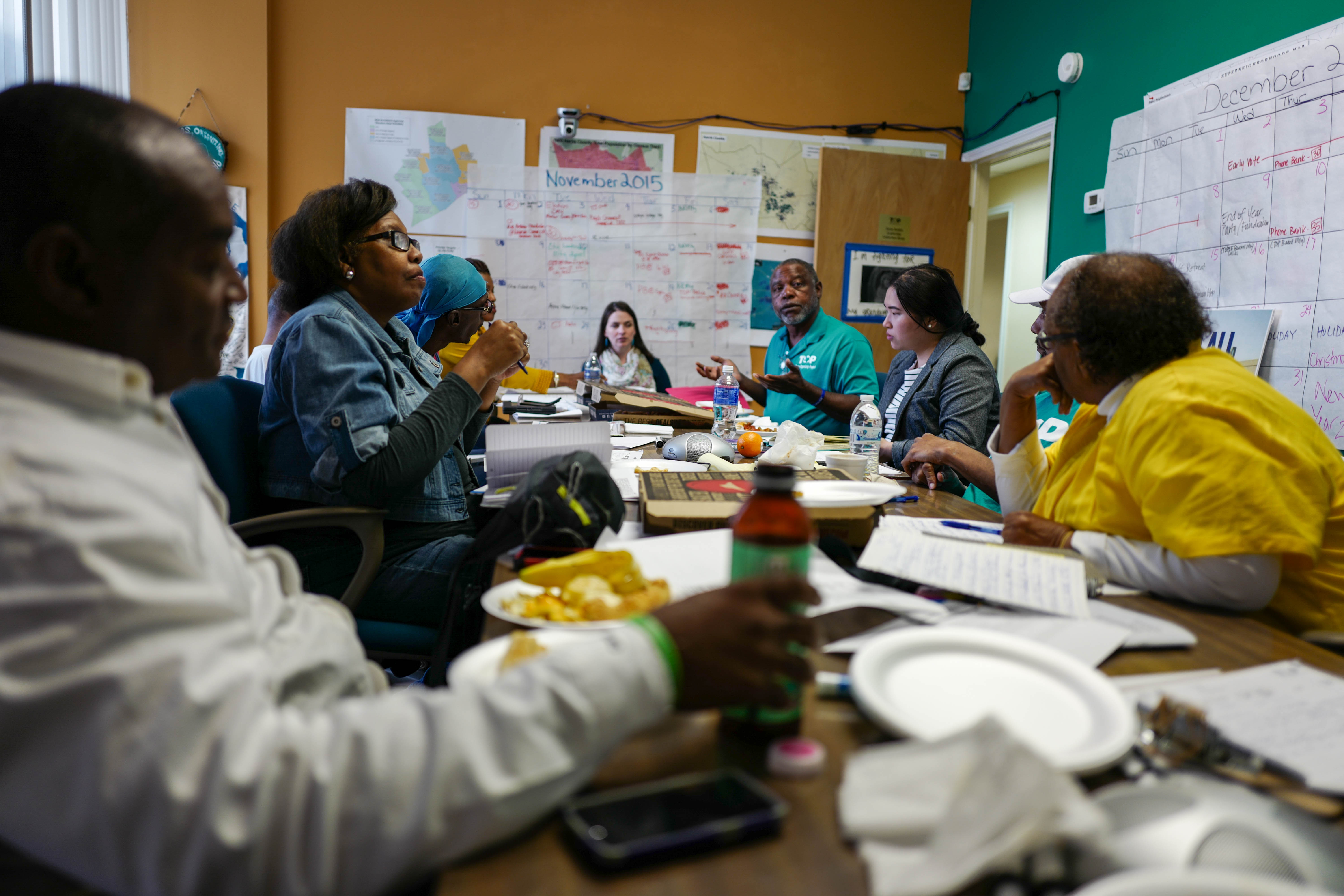 Above: TxLIHIS and Texas Organizing Project staff and community residents discuss neighborhood issues at a meeting of the Sunnyside Pride initiative.

As a new year begins, it’s time to reflect on the growing movement to push forward the much-delayed compliance with our nation’s civil rights and fair housing laws.

Over the past few years, Texas Housers and our partners have intensified our coordination with and support of organized, grassroots community-based groups of low income people of color in the Rio Grande Valley, Houston, Corpus Christi and Galveston, to confront issues of housing discrimination and neighborhood inequality. We have continued our oversight, enforcement and compliance monitoring of our landmark fair housing conciliation agreement with the State of Texas regarding the CDBG Disaster Recovery program. We have expanded our fair housing advocacy, community education, research, advocacy and enforcement activities into a number of new places in Texas.

Meanwhile, events across the nation have dramatically increased public awareness of the relationship of residential segregation and neighborhood inequality to growing racial and economic inequality. This national awareness began with the Westchester fair housing case, decided in 2009 and embraced by HUD and the Obama administration. Our Texas fair housing settlement on the administration of disaster recovery programs for Hurricanes Ike and Dolly came the following year. In 2014 and 2015, the public’s focus on race relations and structural barriers to equal opportunity accelerated rapidly in the wake of repeated acts of racial violence directed against African-Americans and were followed by the Supreme Court decision upholding the use of “disparate impact” claims to prove violations of the Fair Housing Act. It is tragic that violence seems to be the thing that makes our nation pay attention to prejudice and discrimination. As we wake up and begin to pay attention this problem, it quickly becomes clear that racial segregation, which is our country’s great and enduring challenge, is prominent among the problems at the core of the events we are witnessing. And just as urban riots led to the passage of the Fair Housing Act in 1968, today’s Black Lives Matter movement has forced the public, the media and government officials to reexamine racial injustice.

In this moment when our nation is reexamining these challenges, at Texas Housers we are working to support democratic community leadership and provide research for a grassroots movement to overcome segregation and neighborhood inequality. We are developing a model for collaboration between advocates and community leaders to lead this new movement for just and integrated housing and neighborhoods.

Five years ago, as we confronted inequalities in Texas’ approach to administering a massive, federally funded rebuilding program in the wake of Hurricanes Ike and Dolly, we came to an important insight: Policy advocates like ourselves could occasionally win procedural concessions through fair housing complaints and enforcement actions. But broad and systemic change to achieve integrated communities and neighborhood equity could only be brought about by large scale action; by the informed democratic action of low income people of color.

The importance of administrative advocacy by policy advocates should not be underestimated. And the work of civil rights litigators is absolutely critical. The incredible work of Michael Daniel, Laura Beshara, Betsy Julian, Demetria McCain and the staff of Dallas’ Inclusive Communities Project has largely carried the fair housing fight in Texas for three decades.

But systemic change must be led by broad-based, citizen led, democratic action. The sense of movement has largely been missing since the passage of the Fair Housing Act in 1968. We have been thinking about how such a movement might ignite. In doing so, we keep coming back to the source of power that propelled the civil rights movement – community organizing.

At Texas Housers we have worked for decades with grassroots citizens groups to solve discrete housing and community development problems, often with great success. Yet to take on the problem of discrimination, segregation and inequality on a large scale is a much different kind of work. We turned our initial attention to redefining a deep, trusting and sustainable relationship between ourselves, as researchers and policy advocates with democratically controlled, grassroots, organized associations of low income people of color. We now work daily with community leaders and organizers of these associations to understand and expose the nature of housing discrimination and neighborhood inequality at the community level. In the course of this work we are redefining our responsibility to the communities we serve as their partner in change.

Redefining the way we work has not been easy. As policy advocates, in the past when we saw a problem, we rushed to confront it on our own. Organizing and leading a community movement is very different from filing a complaint or negotiating one-on-one with a government official. A citizens’ movement cannot be built on such a one-time administrative or legal victory, but must be built on a series of incremental actions over time that broadly engages citizens and empowers community leaders. The arcane nature of government housing and community development programs, and the complex nature of the historical and programmatic forces that have created structural inequalities in access to housing and in the provision of public services between different neighborhoods, require time and energy on the part of citizens to understand and to develop appropriate responses.

Texas is seldom viewed by outsiders as a center for community activism. Yet that is a misconception. Texas is home for several strong, grassroots, member-based organizations working on issues of racial and economic justice. The grassroots community organizations we work with have been around for a long time, have exceptionally dedicated and knowledgeable leaders and have staffs of professional organizers who understand community organizing and who are deeply committed to their members.

The bottom line is that to systemically attack discrimination and segregation, advocates and community organizations need to examine the issues together and develop solutions based on our combined knowledge and experience. In Houston, we work with the Texas Organizing Project (TOP) on a Fair Housing & Neighborhood Rights campaign. In the Lower Rio Grande Valley, we work with two community organizing groups, La Unión del Pueblo Entero (LUPE) and A Resource In Serving Equality (ARISE), to break down barriers to affordable housing in the cities of the region and secure equitable public services in impoverished exurban neighborhoods known as colonias. We also work with the Galveston Collaborating Organizations, a multi-ethnic, multiracial coalition of civil rights and community groups. In Galveston the current focus is to secure the rebuilding of public housing destroyed by Hurricane Ike as integrated, mixed income apartments and scattered site homes in high opportunity neighborhoods and to compel the city to treat equitably the historic African-American Northside neighborhood.

Often the initial hurdle all of us face in this work is talking about the role of race in our lives and communities. Racism underlies all of these problems. Yet many people, including many effective and insightful community leaders, struggle to explicitly acknowledge the role of race in residential segregation and neighborhood inequality. Just acknowledging segregation is often difficult. The problem is that, in much of Texas today, there is a prevailing custom that makes it impolite in a multiracial setting to speak openly about racial discrimination. Becoming comfortable talking about race and discrimination, and finding a model for working together to confront the legacy of racial segregation and neighborhood discrimination, is essential.

In the past we have filed fair housing challenges against the state, a city or a housing authority in places where we do not have a relationship with an organized grassroots community. On rare occasions we take on issues that our community partners are not ready to confront, do not have the time for or find do not fit into their broader organizing plan. When we take on these challenges alone as advocates, we are inevitably reminded how much less effective we are without an organized grassroots community in the lead. Our values and our approach to advocacy has been reinforced by a growing awareness of the centrality of effective grassroots leadership from low income people of color in fair housing advocacy and movement building.

Much work remains to be done to create an effective grassroots housing justice movement and to define the formula for effective collaboration between policy advocates and community leaders. But the work is well underway and there are successes to celebrate. These are exciting and changing times for people working to overcome structural racial inequality in housing and neighborhoods. The legal victories of civil rights attorneys have propelled progress forward to an unprecedented degree. We are excited to find a new emphasis on fair housing from the Obama administration and HUD. We are challenged, energized and inspired by collaboration with incredible grassroots leaders and community organizers. We are confident the work community leaders and policy advocates are engaged in together will ultimately secure at long last fair housing and neighborhood equity.