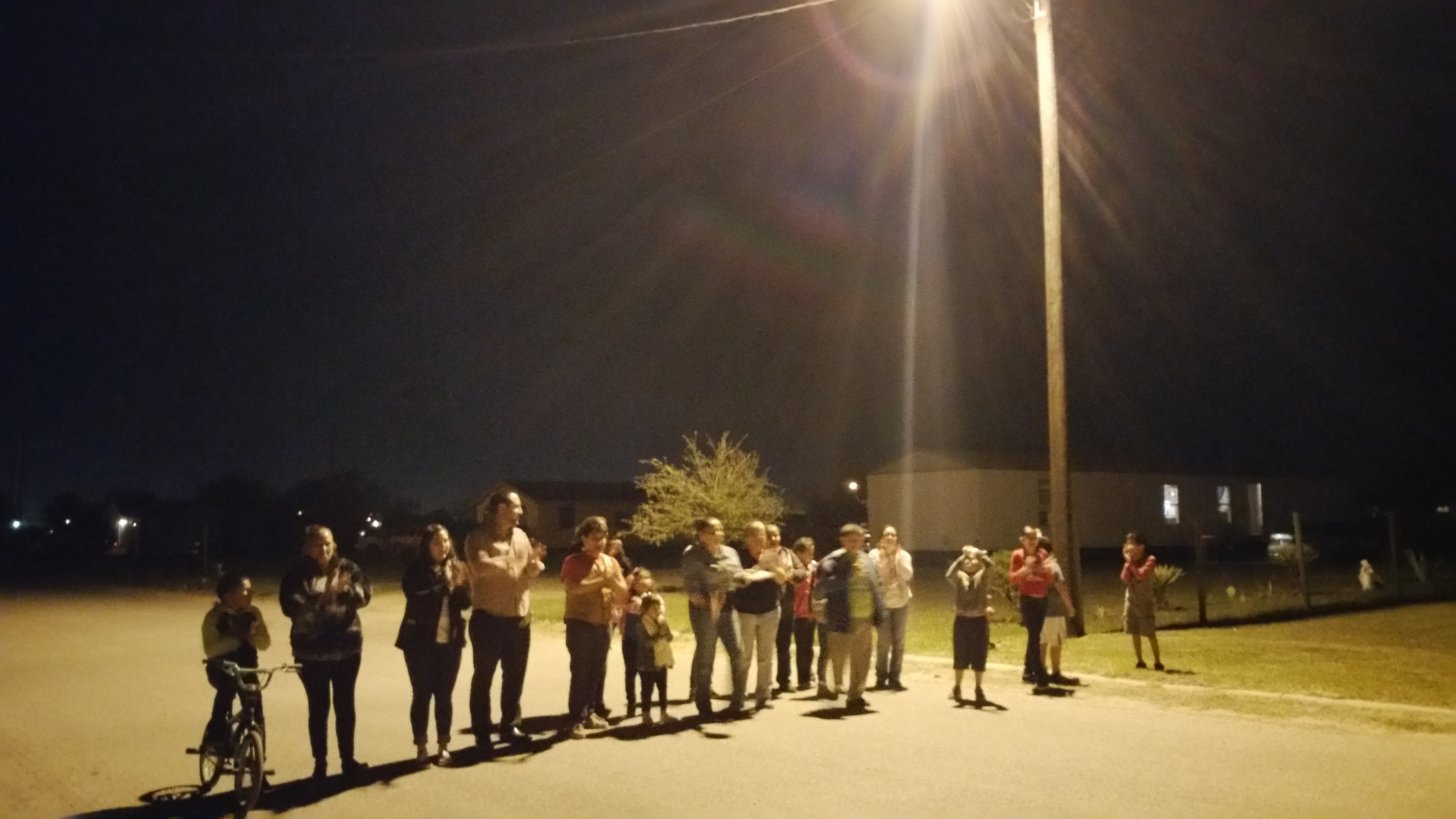 Above: Residents of Colonia Goolie Meadows enjoy the illumination provided by their new street lights.

Last week marked another milestone in the fight for public services equity in the colonias of the Lower Rio Grande Valley. Organizers from La Unión del Pueblo Entero (LUPE), working with A Resource in Serving Equality (ARISE) and community leaders from the colonias Goolie Meadows and Mi Sueño celebrated as Hidalgo County installed public lighting in their neighborhoods. Mi Sueño residents happily chanted “Si se puede!” as the sun set and the public lights illuminated their colonia for the first time. Since then, three more colonias have had streetlights switched on. Six more are expected to receive lights in the coming weeks.

Nelly Curiel, a resident of Goolie Meadows, has been at the forefront of organizing this positive change in her community. When the lights went on in her colonia, she took to social media to express her delight: “On a day like today, almost a year ago, commissioners from precincts 1, 2, 3 and 4 committed themselves to solving the issue of the lack of public lighting in the colonias. This morning the installation of mercurial lights began in the Colonia Goolie. It is a victory for our colonias and organization since we have more than ten years advocating for this need.”

The installation of the lights comes after arduous work, countless hours organizing and advocating for the legislative changes that finally removed the bureaucratic obstacles limiting the county from providing the service. LUPE, ARISE and the county have worked through many of the kinks in the pilot program’s implementation, such as the requirement that residents receive consent from 75 percent of their neighbors before lights can be installed. “It was an entire process, but a great achievement at last,” Nelly announced to her neighbors who gathered for a celebratory cook out.

One of those neighbors was Rosie Tijerina, who earlier in the week attended the Hidalgo County Commissioners Court to continue pressuring for expedited service. Ms. Tijerina was interviewed by the local newspaper and explained that public lighting “would allow for ambulances, police. You can have people out walking; people can feel like they can have their kids outside — that creates trust among the people.” Ms. Tijerina addressed her neighbors to assure them they can rest a little easier now. She emphasized the power of working as a community. The installation of public lighting in these two colonias is a positive step toward the illumination of all the colonias in Hidalgo County that have been in the shadows.