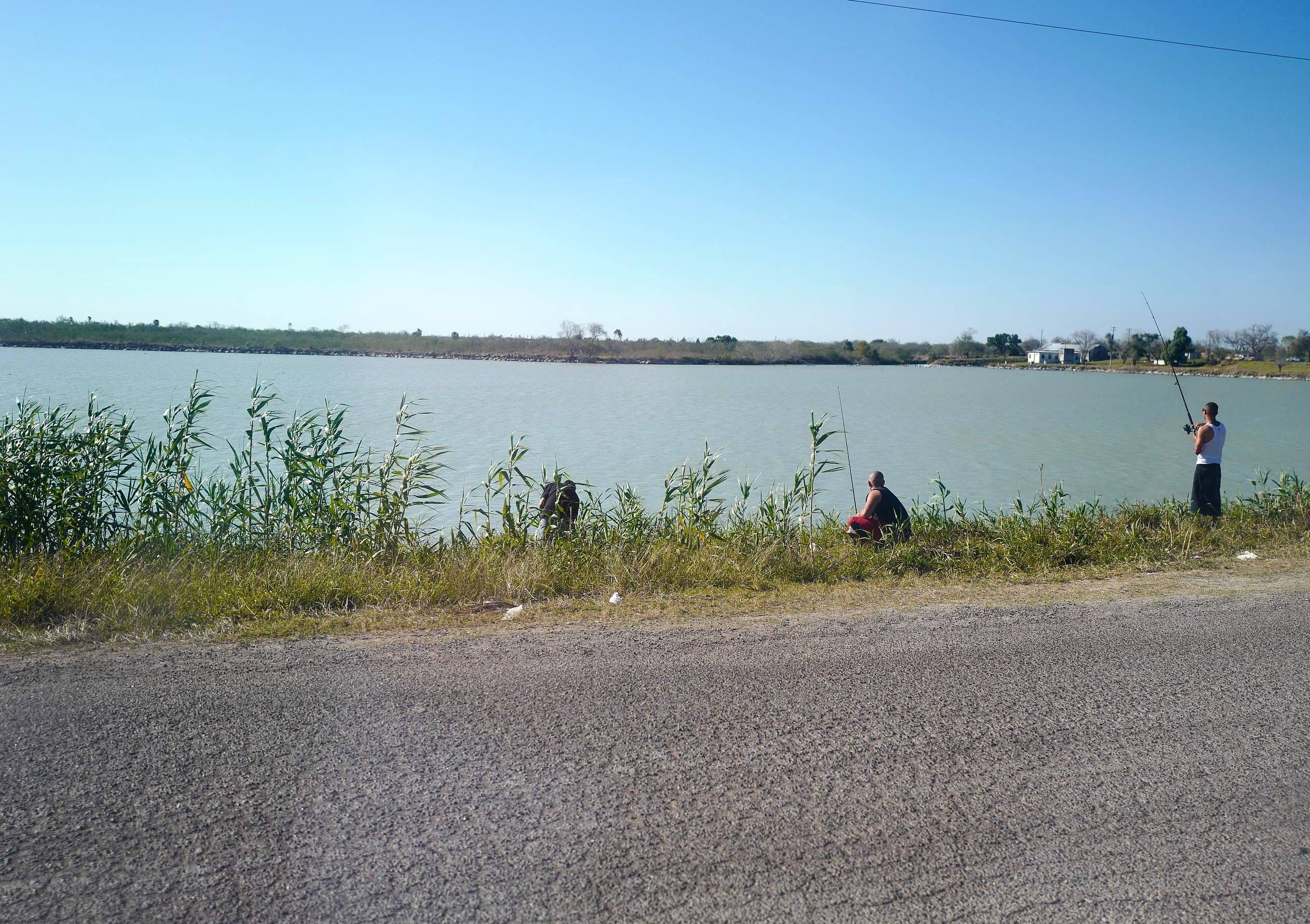 TxLIHIS staff members work on a wide range of issues across the state. To highlight some of that work, I’ll occasionally record brief conversations with our staff on the issues with which they’re currently engaged. This week, I spoke with our co-director John Henneberger and Rio Grande Valley director Josué Ramírez about the longtime contamination of a popular community fishing spot (pictured above) – and the lack of environmental protection from the local, state and federal governments. The roughly 15-minute conversation is also viewable as a transcript posted below the audio recording. The transcript has been lightly edited.

Will: As the Texas Tribune recently reported, the fish in Donna Reservoir and Canal in Donna, Texas contain PCBs, very dangerous chemicals that have been proven to cause a serious risk of cancer for people who eat the fish. The problem is that Donna Canal is a popular source of fishing for local residents from all around the Valley.

Federal and state officials have known that the fish in Donna Reservoir and Canal have been contaminated for decades. It has been a Superfund site for nearly a decade. Despite this, people continue to fish every day. There have been occasional signs posted warning about the fish, but those are easily ignored or removed and very few other enforcement efforts have been made by the State of Texas, the Environmental Protection Agency (EPA) or the private irrigation district which owns the site. The lake is easily accessible by residents who come to fish every day.

Local community organizing groups have been trying to get government to do something about this environmental contamination issue for some time. Thanks to their efforts, the EPA has now re-investigated the site and is determining where the contamination comes from. However, as this is all going on, fishing continues unabated with very little enforcement from any government agencies.

John, what does this issue have to say about justice for low income people in the Rio Grande Valley, and housing and neighborhood issues more specifically?

John: The situation with Donna Lake and the PCB contamination that’s literally killing people in the Rio Grande Valley sort of perfectly summarizes the failure of government agencies to adequately protect the lives of people in highly impoverished colonias. We worked for several decades with community organizations like LUPE and ARISE to try to get justice in the colonias. But justice really requires that government work. And I think this whole situation, where this contamination has been known now for decades and where people continue to this day to eat contaminated fish, get cancer and die, because the government has failed to protect people, is a perfect example of the problems that beset the colonias.

Will: Josué, what does your work with some of the people who live in these colonias entail, and how do they approach this problem?

Josué: I work very closely with A Resource in Serving Equality, or ARISE as you mentioned, and they are a colonia-focused organization providing services for the communities, specifically for women and children. And this issue has been on their radar since the problem was discovered. They were outreached to do some flyering and pamphleting.

My role at TxLIHIS is really as a resource role for ARISE. So that means being a liaison between the community, colonia residents, and the agencies in charge and who need to be held accountable, such as the Texas Commission on Environmental Quality, the EPA, local mayors and city officials. And really TxLIHIS’ role has been as a facilitator of those conversations. We’ve held community meetings with colonia residents and these staff members, including the regional director of the EPA, having direct conversations about what colonia residents’ problems were, from colonia residents. And I don’t think that necessarily is something the regional director feels or the staff of these agencies have to deal with a lot of the time. So I think my role is to provide a space for the community up front and make sure their voices really get heard, to make sure what they’re saying is heard and actually done.

John: And I’d just add that I think a light has to be shined on these failures and that’s part of our role. It’s also our role, as Josué says, to help the community organizations, the people most effected, get in front of this issue and expose it to the general public. The solution here is only going to come when people become outraged and demand that their government do right by them. And that’s the role of community organizing. That’s the role of the media and engaged citizens. It’s our job to support the community organizing at the grassroots and then get the facts out. All of us should be concerned about these types of failures.

Will: So what is going on now that the EPA has released a preliminary report, again finding contamination in the fish and possibly finding the source of that contamination? I know that they put up a few more signs to try to stop people from fishing. Has there been any change?

Josué: The change that has been happening at the EPA level is very bureaucratic. At this point they’re still trying to identify the source of contamination, with 23 years of knowing that it’s been contaminated. And so the process has been very slow. At this point the EPA has released some initial reports including the risk assessment, the health assessment and the ecological assessment that give the community more detailed information about what the problem is, what the contamination is and where it is. This is good progress that we’ve been seeing, but it really has come from a lot of community pressure.

Will: John, besides the technical elements of where the contamination is coming from, the fact is that federal, state and local officials have known that there is contamination for at least 23 years, probably longer. As they figure out the technical solutions, what are some things they could be doing right now, and why aren’t they doing them?

John: What needs to happen right now is that either somebody needs to drain the lake and stop people from eating the contaminated fish, or someone needs to enforce a fishing ban. For some reason or other, government seems incapable of getting that job done. The game wardens have stopped enforcing the fishing ban. Up until the other day, like last week, there weren’t any signs warning people not to fish – the signs had been torn down. This has been going on now for more than 23 years, and it’s just not adequate protection to say that people ought to know because we’re passing out some leaflets and we’re doing some PSAs on the TV stations.

I drove down there the other day with officials from the EPA. We passed people on both sides of the road with fishing poles in the lake. And every time you drive down the road – and this is a state highway that leads to the lake and through the lake on a causeway – there’s people on both sides almost every day taking fish from this lake, and nobody stopping that from happening. I think we really expect government to do a much better job of making sure that people are protected.

The ramifications of this are not simply for the people who are directly fishing themselves, but in some cases people are fishing for sustenance. They’re low income, they don’t have adequate food sources and they’re eating the fish out of economic necessity. In other instances, we’ve had reports that people are actually selling the fish to local restaurants or to neighbors, or giving the fish away. And the EPA report basically says that the cancer risks are not simply risks; they border on certainties for people who eat significant quantities of this fish. From all appearances, it seems that a whole lot of people in the Rio Grande Valley are eating high quantities of this fish.

Will: In the Texas Tribune story, they spoke with Kelly Haragan, who is the director of the Environmental Clinic at the University of Texas School of Law. She asked a rhetorical question that I want to ask you both: If this was happening in Plano, or an upper-class, majority white community, would it have taken this long for government to do anything to protect residents?

John: I agree with Josué. I think this situation would have been taken care of a long time ago. There is no equivalent situation to the Donna Lake Superfund site in higher income neighborhoods and this is, in my opinion, virtually textbook environmental racism, meaning that in low income communities of color people are treated substantially differently in terms of the type of government services and protection that they get from their government.

Will: Josué, moving forward and acknowledging the difficulties of getting government to pay attention to communities like Donna, what are the organizers on the ground thinking and what are their goals for now?

Josué: Their main thought is really on the community, the well-being of their friends and families. That’s what they’re thinking about and that’s what’s driving them to educate people around the lake and the surrounding communities about the dangers of eating contaminated fish. Not only to community members, but also to elected officials and to the agencies. The organizing groups have been very, very good at maintaining focus on this issue. They’ve made it part of the Texas state environmental justice agenda. It’s a priority now, and they’re going to keep pushing for solutions. They understand that there is a process going on and they understand that they need to be educated to be a part of that process in terms of providing solutions that make sense and that work for them.

John: This situation is just one example of these type of environmental problems in the colonias. The colonias are arguably the most concentrated, highest poverty region in the United States today. It all boils down to people getting treated differently, both because they’re poor and because they’re Hispanic, and also because many residents in the area are immigrants. If we look at other issues in the colonias, many of them are environmentally related.

Problems like flooding – the colonias are often located in low-lying areas and generally government has failed to provide that developers build adequate infrastructure to prevent them from flooding. So we have continual flooding. We have lots of standing water issues and mosquitos, and with the Zika virus coming to the United States this is going to be another public health catastrophe. We’ve had years of problems trying to get adequate wastewater disposal into the colonias, and we had a scare back in the ’90s about a potential cholera outbreak because people weren’t connected to sewer systems. It’s just one continuing environmental crisis after another, and we trace all those problems back to the fact of this differential treatment. The fact that our federal government, state government and in the Rio Grande Valley the county and local governments, often treat poor people of color, and especially poor people of color who are recently immigrants, fundamentally differently and deprive them of essential public serviced. And in this case, essential protection of their lives.

This is really the work today that our partners and we are dedicated to trying to advance in the Rio Grande Valley. It’s about equality. It’s about making sure that government does what it promises and is responsible to do – protect the lives of its citizens.

4 comments on “Listen: Shining a light on environmental injustice in the colonias”