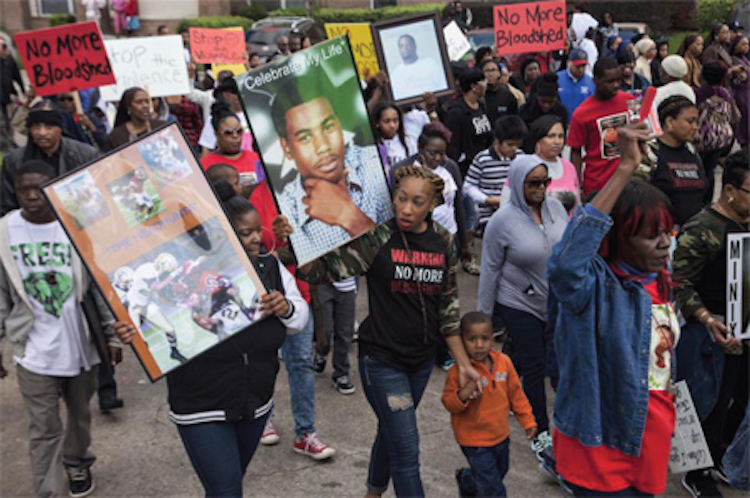 The U.S. Justice Department has declared this week “National Reentry Week” to shed light on the challenges faced by formerly incarcerated individuals. The National Low Income Housing Coalition (in which we are a proud state partner) has launched the coinciding #FairChanceAtHousing campaign about the difficulties for former inmates in finding housing and building a life with their families after returning to their communities.

In Houston’s Sunnyside neighborhood, residents know these issues all too well. We have been involved in the creation of the Sunnyside Neighborhood Plan that, in part, aims to tackle criminal justice inequities, prevent violence and cultivate a rich support system for ex-offenders and their families.

Sunnyside has much to overcome when it comes to crime and safety. The predominately African-American neighborhood has a violent crime rate triple that of Houston and a property crime rate 40 percent larger than the city’s overall. In 2013, Sunnyside was ranked the sixth most dangerous neighborhood in the nation by Neighborhood Scout. Residents deal with long police response times in the community, sometimes double the department’s goal.

Sunnyside’s zip code, 77051, had the second highest rate of individuals entering prison in the city, with about 33 of every 1,000 adults going to prison each year. Harris County’s overall rate is just six prisoners per 1,000 adults.

Ex-offenders return to Sunnyside more frequently than any other neighborhood in Houston. In 2008, 34 prisoners returned per 1,000 adults – almost exactly the number of people incarcerated from the neighborhood every year. When these residents return to their community, they need to come home to a comprehensive support system that addresses housing, job placement, continuing education, substance abuse and mental health to best reduce the ex-offender’s chance of recidivism.

But when ex-offenders return to Sunnyside, they come home to a place with very little opportunity. They may be unable to live with their family due to tenant screening policies, find gainful employment or find assistance to overcome substance abuse, mental illness or other obstacles preventing them from leading a productive life. These challenges often cause formerly incarcerated individuals to fall into the same old patterns, reoffend and return to prison.

Sunnyside residents who participated in the neighborhood’s planning process envision a different kind of future for their community. They want to feel safe in a community filled with people who look after each other.

Many residents recognize those with criminal backgrounds as fellow classmates, neighbors, brothers and sisters. They have just as much a right to call Sunnyside home, and most participants in the Sunnyside Pride process expressed a desire to find ex-offenders a solution rather than to lock them up or send them away.

Sunnyside residents also want to foster a more trusting relationship with the police, and ensure the police are responding adequately to their calls. At the same time, plan participants emphasized violence prevention tactics to get at the root causes of crime. And a vital part of violence prevention is improving the support system around an ex-offender’s successful reintegration in the community.

The U.S. Department of Housing and Urban Development (HUD) recently unveiled new guidance stating that landlords who turn refuse any applicants with a previous arrest record may be violating the Fair Housing Act. It’s an important step in creating more inclusive housing policies and communities, but more can be done.

For many Sunnyside residents, the goal is not only to provide housing and social services for formerly incarcerated, but also to prevent more community members from entering the criminal justice system in the first place.

Reforming public housing occupancy policies for formerly incarcerated individuals and their families.
HUD and the Shriver Center recommend several best practices to make public housing more attainable for those with criminal backgrounds and their families. The Houston Housing Authority could amend their tenant screening processes to include more of these practices, such as specifying standards for what constitutes a disqualifying criminal activity, allowing family members with criminal history to be added to an existing voucher if they receive support services and limiting the amount of time a criminal background check can look into someone’s past.

Creating a comprehensive prisoner reentry program that provides housing and jobs for ex-offenders.
A citywide program could help ex-offenders find opportunity in different areas around Houston. Like low income residents searching for affordable housing, ex-offenders should have a choice in where they would like to live. Prisoner reentry services must be available for the high number of recently released people in areas such as Sunnyside.

Require healing training for police, teachers and other officials that serve low income communities.
Public officials tasked with serving the populations most at risk for crime and unfair incarceration should be trained in culturally relevant, trauma-informed methods of violence prevention.

Ending the school-to-prison pipeline.
The cycle of pushing children out of schools and into the criminal justice system can be broken by using restorative discipline techniques, creating a legal track to expunge records of people under 24 years of age, clearly defining tardiness policies to prevent subjectivity and funding counselors and nurses in schools to defend against mental health issues.

Shift the use of schools and other public spaces to the public.
Some schools lock their gates when classes adjourn, often leaving safe recreational space out of reach to the surrounding community. Allowing school fields and playgrounds to be open to community use on evenings and weekends establishes trust between the neighborhood and the educational institution, and provides badly-needed programmed open space to residents. The city should also strive to make more streets inviting, green places, which would result in more eyes on the street and less crime taking place.

Fund summer jobs programs for at-risk teens.
Staffing municipal positions with youth from vulnerable communities such as Sunnyside would provide a well-paying way for teenagers to stay occupied during the summer.

Engage formerly incarcerated individuals in matters regarding crime and violence prevention.
If the City considers new policing policies, building a new justice facility or other criminal justice decisions, ex-offenders should be engaged throughout the planning and implementation processes.

Sunnyside has the potential to become a national incubator for violence prevention and reentry strategies. These tactics, if implemented by Houston’s public officials, could have deep and lasting impacts on Sunnyside and other historically minority neighborhoods facing similar issues.

Problems of reentry, and the roadblocks to fair chances at housing for ex-offenders, are too severe to continue to ignore. While there is no one solution, the menu of options the Sunnyside Pride plan offers is a starting point for improving lives and creating a safer, brighter future for Sunnyside’s children.

Photo above: Sunnyside residents march against violence in 2015 via Houston Forward Times