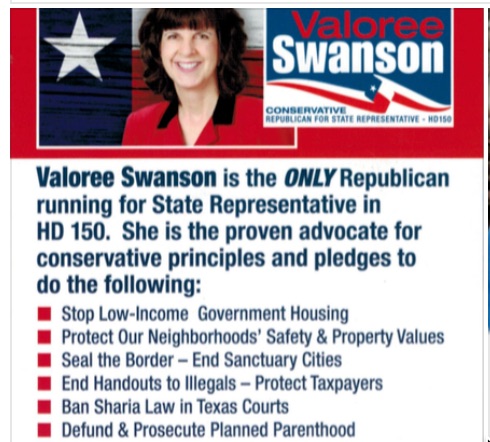 Elected on a pledge to “Stop Low-Income Government Housing” (see campaign ad above),  Real Estate Broker and State Representative Valoree Swanson (R-Dist. 150) has moved to make good on that pledge by filing HB 1792.

The legislation amends the application and scoring procedures for Low Income Housing Tax Credits (LIHTC) administered by the Texas Department of Housing and Community Affairs (TDHCA).

The bill is perhaps the most expansive Not In My Back Yard (NIMBY) legislation ever filed.

The proposed legislation requires notification of all neighborhood associations that have any portion of their boundaries within five miles of any application to TDHCA as follows:

(b) Notice provided under Subsection (a)(9) must:

(1) be given at least 90 days before the date the application is submitted to the department;

Rep. Swanson also campaigned on a promise that she, “Will fight Section 8 low-income housing” (see below).

The proposed legislation violates the Fair Housing Act (Title VIII of the Civil Rights Act of 1968).