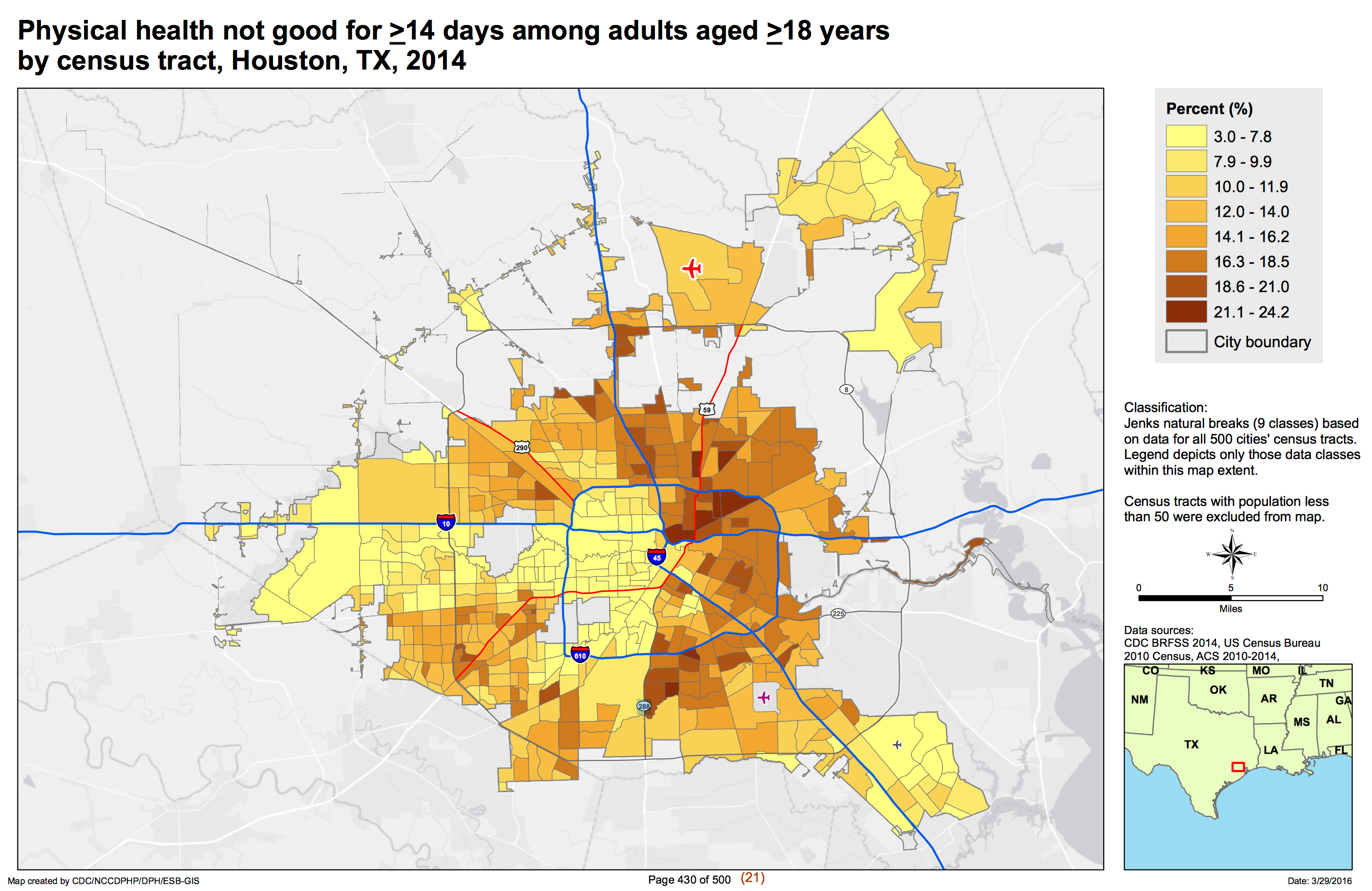 Neighborhood inequality is most often measured by an area’s physical and economic characteristics. Yet health inequalities between neighborhoods receive less attention than they deserve. Thanks to a new web-based interactive tool released by the Centers for Disease Control and Prevention and the Robert Wood Johnson Foundation, anyone can find and search health data at the neighborhood level for 500 U.S. cities.

I decided to try the new tool out for one city that has an extraordinarily high level of physical and economic neighborhood inequality – Houston.

If we are to understand the relationship between environment and neighborhood physical conditions and health, we need to be able to examine neighborhood health data. “Measures of health outcomes are generally gathered at the state and county level,” said Oktawia Wojcik, a research-evaluation-learning unit program officer at the Robert Wood Johnson Foundation, speaking to reporters about the project. “This really masks important differences among geographic areas that are smaller than counties, making it difficult to identify health disparities and target interventions.”

We have to begin by understanding the demographics and conditions in Houston neighborhoods. Below are three maps developed in our ongoing Houston research.

The first map shows the racial and ethnic distribution of people in Houston and the location of government-subsidized housing developments:

The second map shows the City of Houston’s own assessment of neighborhood market values. In 2014, the City commissioned the Reinvestment Fund to perform a Market Value Analysis (MVA) of Houston. This analysis looks at factors such as median sales price, foreclosures, presence of vacant lots, new construction permits, code violations and other factors to assess the strength of markets across the city. The purpose of the MVA was to “assist the private market and government officials to identify and comprehend the various elements of local real estate markets.” Analyses such as the MVA are frequently used by commercial entities to make business investment decisions, such as where to open a new business location or build new housing. Note the cluster of blue and purple areas which roughly make the shape of an arrow in western Houston. These are the strongest markets in the city:

The final map shows the location of government-subsidized Housing Choice Vouchers (Section 8) in Houston. These are the rental units the government has subsidized for extremely low income families:

Now let’s examine at a few of the maps from the Centers for Disease Control website. A Houston map book can be accessed where all of the interactive maps can be viewed in static form.

We saw in the previous maps the overlap between where African-American and Hispanic families live, areas with low market values in Houston and places where government subsidized housing is provided. The maps below show that those same areas are places with a prevalence of poor physical and mental health and specific major health problems:

The coincidence of neighborhood racial and ethnic segregation, substandard physical conditions (including a lack of equal public infrastructure) and subsidized housing with major health problems demonstrates that Houston residents of color not only pay a high economic and social price for conditions of residential segregation but are also paying a steep price through increased disease and poor mental and physical health overall.