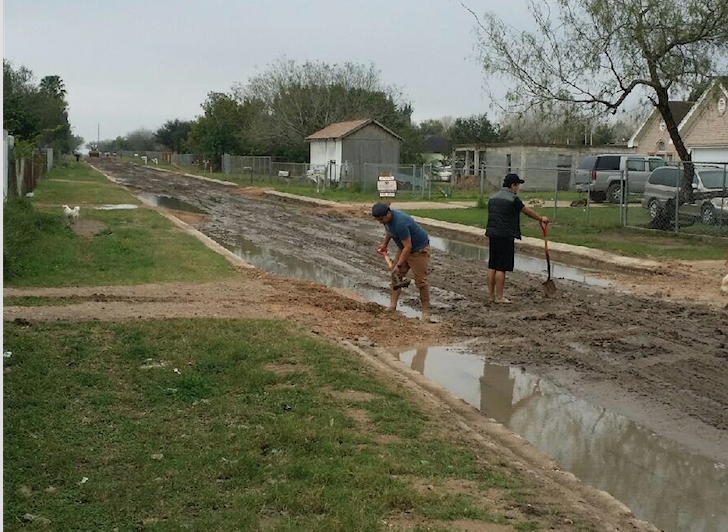 Every resident of Hidalgo County deserves to live on a street with lights and drainage.

For far too long, however, these most basic public services have been lacking in the colonias in the unincorporated county, endangering residents.

Finally, thanks to pressure from colonia residents, that might be about to change for new colonia developments.

Colonia residents and their supporters saw this as an opportunity to raise the standards of basic infrastructure for all new neighborhoods built in unincorporated Hidalgo County.

Thanks to that advocacy, Hidalgo County is considering such improved standards in the updated rules. Still in draft mode, the rules will be presented to the Hidalgo County Commissioners Court once they are finalized. To go into effect, the Court must vote to adopt the updates.

Colonia residents and advocates are urging the adoption of standards that provide protection from flooding and drainage problems associated with 25-year storm events. This 25-year requirement would improve on the county’s current standard of 10-year protection, and give residents of new unincorporated subdivisions a similar level of service as the residents of cities. Because the region’s cities will eventually incorporate the surrounding colonia communities and require the higher standard, this seems like a common-sense approach to development.

Furthermore, the need for modern drainage and flooding infrastructure has become increasingly urgent, as the amount of development in flood-prone areas has risen and the county has experienced heavy rain events with more frequency. We need to reverse this trend, and the 25-year standard is an important first step.

Another important suggestion for the MSRs is the requirement that no future subdivisions are built without streetlights. Public lighting is an essential public safety need for many colonias, and it took a years-long organizing effort from community groups to win a new county lighting infrastructure program.

Hidalgo County is now working with colonia residents to bring streetlights to existing neighborhoods on an individual bases, a task that will take time and a significant commitment of county resources, given the sheer number of neighborhoods without streetlights. If public lights are required for any new subdivision to be built, the responsibility is shifted to developers, preventing future cost for the county and, more importantly, finally establishing that no new subdivisions will be left in the dark.

Colonia residents and advocates are encouraged by reports that the most recent MSR drafts include both the 25-year standard for drainage and street lighting requirements. We know that when residents and county officials work together, we come to better decisions that benefit everyone.

If Hidalgo County Commissioners Court adopts these standards, thousands of Hidalgo County residents will benefit from an improved standard of living, and our county will move closer toward being a place where opportunity is available to all.

Just as colonia residents were there at the beginning of this process making their voices heard, they will continue to advocate for these changes until the County Commissioners finally vote to adopt the new MRS standards.

1 comment on “At long last, basic public services may be coming to some current and future South Texas colonias”