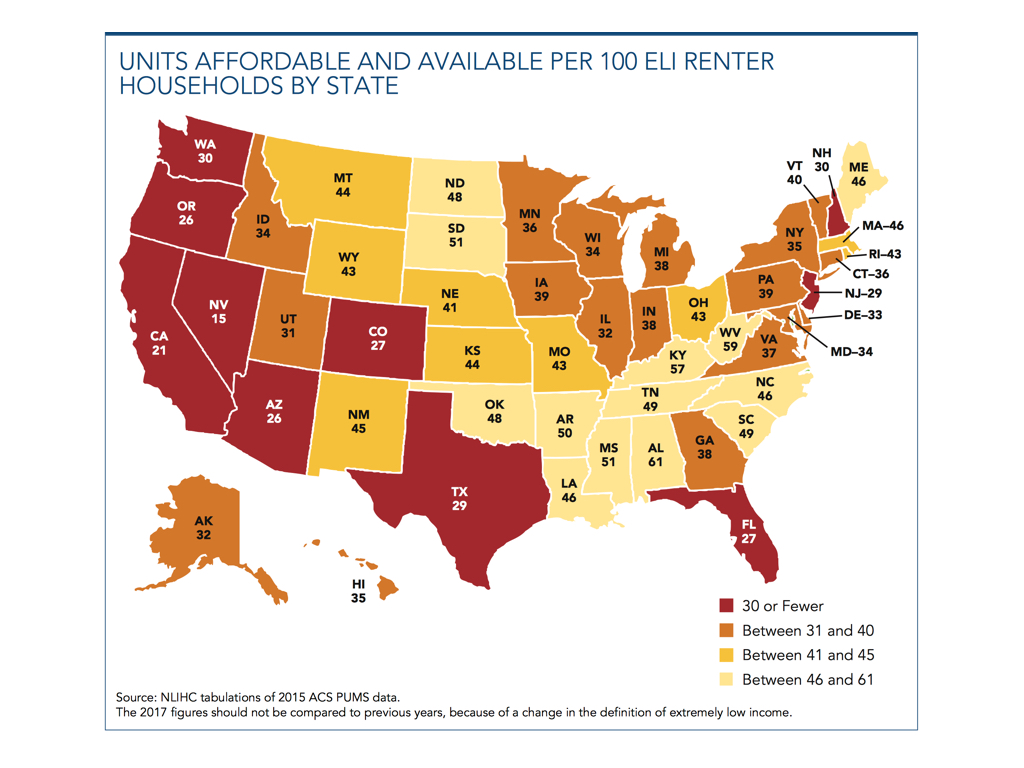 A new report from the National Low Income Housing Coalition (NLIHC) reveals that the housing cost burden for extremely low income families in Texas, and particularly in our state’s major metropolitan areas, is now among the worst nationwide.

NLIHC’s annual report, “The Gap,” ranks Texas as the seventh-worst state in the number of affordable housing units available to households earning at or below 30 percent of Area Median Family Income (AMFI), known as Extremely Low Income or ELI households. Housing is considered affordable if it does not saddle households with a cost burden, defined as exceeding 30 percent of household income. For every 100 ELI families in Texas, there are only 29 housing units available at affordable levels below the cost burden.

Based on data from the U.S. Department of Housing and Urban Development and the U.S. Census, the report concludes that Texas has a staggering deficit of 626,192 housing units affordable for ELI households. That’s an increase of more than 30,000 units since last year. At a time when affordable housing is more necessary than ever, Texas is moving in the wrong direction.

Yet the State of Texas’ housing programs are not designed to close the gap and reverse the trend threatening the stability of so many extremely low income families. According to the 2017 State Low Income Housing Plan, of all the individuals and households served last year by housing funding via the Texas Department of Housing and Community Affairs (TDHCA), just 13 percent were ELI. In the face of a massive ELI housing deficit, the State facilitated the construction of just over 6,000 new or rehabbed rental units in 2016. Almost none of these units will serve ELI households unless they have housing vouchers, because of the way the State administers its funding.

Only 1 percent of TDHCA’s budget comes from state resources, with the rest provided by federal programs such as HOME and LIHTC. The State does not target these federal funds to serve the lowest-income households. Currently, almost all Texans who benefit from housing programs are those earning enough to afford rent levels in federally-subsidized apartments, which in Texas are mostly between 31 to 60 percent of median income, or who have federal vouchers themselves.

HOME and LIHTC are critically important programs for providing housing for low income families. According to the NLIHC report, 32 percent of households earning between 31 and 50 percent of median income, the residents mostly served by housing programs in Texas, experience severe cost burdens. That is still far too many Texans spending more than half of their income on housing – but significantly fewer than ELI households.

There is a new federal resource specifically targeted at ELI families, the National Housing Trust Fund, an important first step toward shrinking the gap. But much more investment is needed. Texas received just $4.8 million from the Trust Fund in 2016, which will fund a handful of units to be built this year. NLIHC’s United for Homes campaign seeks to greatly expand federal funding for the Trust Fund and other programs, but even if the campaign is successful, it would generate approximately 131,550 new rental units in Texas over the next decade. That’d be an exponential increase over current affordable housing construction but still just a fraction of the state’s housing deficit.

The affordable housing crisis hits Texas’ major cities the hardest. The Houston metro area is the third-worst in housing availability for extremely low income households among all major metros in the country, with only 18 units per 100 households. The Dallas and Austin areas don’t fare much better, ranking sixth- and ninth-worst in the nation, respectively.

It’s important to note that Houston’s deficit of needed affordable units is more than 32,000 higher than just a year ago, meaning that Texas’ growing gap of available affordable housing can be mostly attributed to the Houston area.

This huge shortage of affordable housing places crushing financial burdens on the lowest-income Texas households. The report finds that in Texas as a whole, more than 7 in 10 ELI households are severely cost-burdened, meaning they spend more than half of their income on housing.

The housing gap does not affect all Texans equally. Only about 1 in 100 Texas households earning between 80 percent and 100 percent of the state median income face a severe cost burden, and in fact, the report finds that among households earning the median household income or more, Texas has a slight surplus of affordable housing – 105 housing units available for every 100 households.

As the report notes, “ELI renter households have little, if any, money left for other necessities after paying the rent. A severely cost-burdened ELI household with monthly income of $1,690 spends a minimum of $846 per month on rent, leaving at most $844 for all other expenses. The U.S. Department of Agriculture’s [2016] thrifty food budget for a family of four (two adults and two children) is $655, leaving at most $189 for transportation, child care, and other necessities.”

The full report is well worth a read. It makes clear that in order to relieve the housing cost burdens for the Texans most in need, the State and city governments in Houston and beyond must make the targeting and financing of ELI housing a top priority.

Note: This piece has been updated to reflect that 13 percent of TDHCA housing funds in 2016 served ELI households. A previous version stated that less than 1 percent of all TDHCA funds went toward ELI households – 0.19 percent, to be exact, a figure which includes both housing and community affairs funding. The change was made because the housing-specific funds are more germane to the topic at hand.