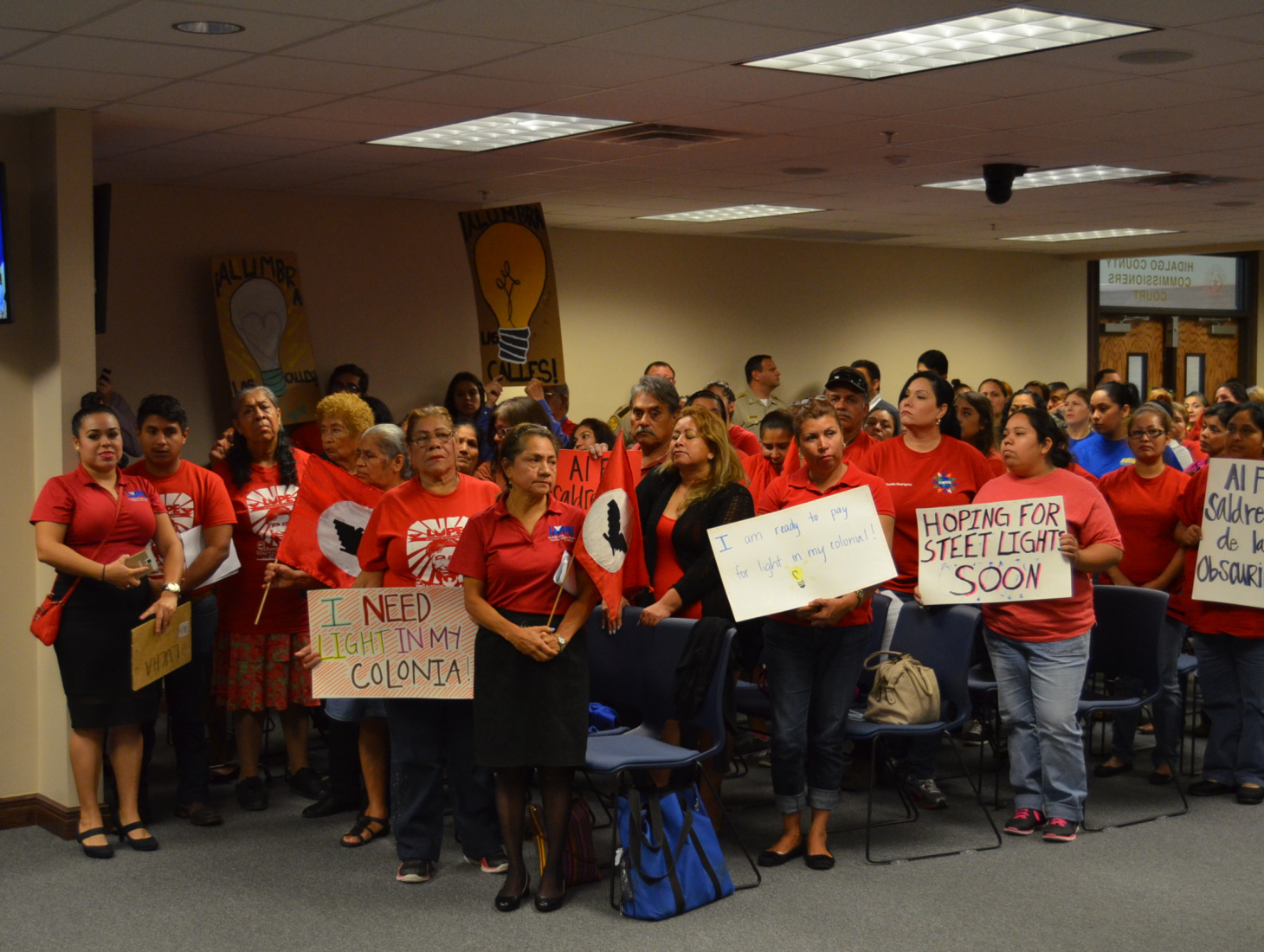 Colonia residents in Hidalgo County have experienced far too much flooding and darkness, the dangerous symptoms of poorly-planned subdivisions where developers didn’t have much stake or responsibility to provide adequate infrastructure for residents to live safely.

For these reasons, community leaders of La Union del Pueblo Entero (LUPE) and A Resource in Serving Equality (ARISE) organized around amending the Model Subdivision Rules (MSR’s) for the inclusion of two specific provisions. Last week the Hidalgo County Commissioners Court adopted updates to the Model Subdivision Rules (MSRs) that call for higher standards for services in new unincorporated developments including upgraded drainage and streetlight infrastructure, marking a major milestone for the county.

The Texas Legislature enacted the Model Subdivision Rules in 1989 to empower counties and help them prevent the increase of colonia developments along the Texas-Mexico border. For counties that adopted the rules, they stipulate adequate water, waste-water service, roads, electric, gas and flood plain management must be provided in new subdivisions. These standards in addition to other requirements were first steps in addressing some of the major neighborhood issues that low-income property owners in the county faced.

While the Model Subdivision Rules began reining in colonia development, they were not the complete solution to development issues. For example, in Hidalgo County, the county with the most colonias, the MSRs did not require public lighting in new developments. The rules also excluded housing standards, and as a result many households in subdivisions live in unsafe and overcrowded conditions. Additionally population growth and the development in the region coupled with the increase of global warming and large-storm events have proven the need for upgrades in the 10-year flooding mitigation standards. Notable rain events that have hit the region in the last five years and devastated different parts of the county have shown time after time the inadequacies in the localized and regional drainage capacity.

Colonia residents are well aware of the failures of the drainage systems and have pushed for the same types of flood protections that major cities in the county mandate. The amendments to the Model Subdivision Rules’ increase the drainage protections from 10 to a 50-year event will ensure that homes in new subdivisions should be safer from flooding. The changes surpassed the community suggestion of 25-year protection, which shows the county planning department and the drainage district are taking proactive measures to prevent issues that they will be responsible for addressing in the near future.

Thanks to the changes residents of new unincorporated subdivisions will be at ease knowing their children will wait for their bus in a well-lit area as the requirements now mandate developers include public lighting infrastructure in front of the properties and a designated bus stop in front of the subdivisions. Community leaders believe that public lighting will foster healthier and secure communities by reducing risks for pedestrians and promote safety through visibility. Colonia residents advocated for public lighting improvements for years, even going so far as to change state policy to allow the county to implement a lighting program and charge residents for the service. They understand that in order to light all colonias, the county must not allow new subdivisions without lighting to be built. These changes ensure that and bring an end to the cycle of keeping unincorporated neighborhoods in Hidalgo County in the dark. The amendments made to the Model Subdivision Rules in Hidalgo County last week will have a lasting impact in the landscape and growth pattern of the Rio Grande Valley.

While the changes made to the regulations increase the minimum expected service provision in the county, existing colonias are not guaranteed these important protections. There are dozens of colonias in Hidalgo County that will still toil in darkness and in floods as they have for decades. The next battle for residents and advocates will be urging the state and county to help improve the housing conditions in model subdivisions and to bring infrastructure in pre-existing colonias up to par.