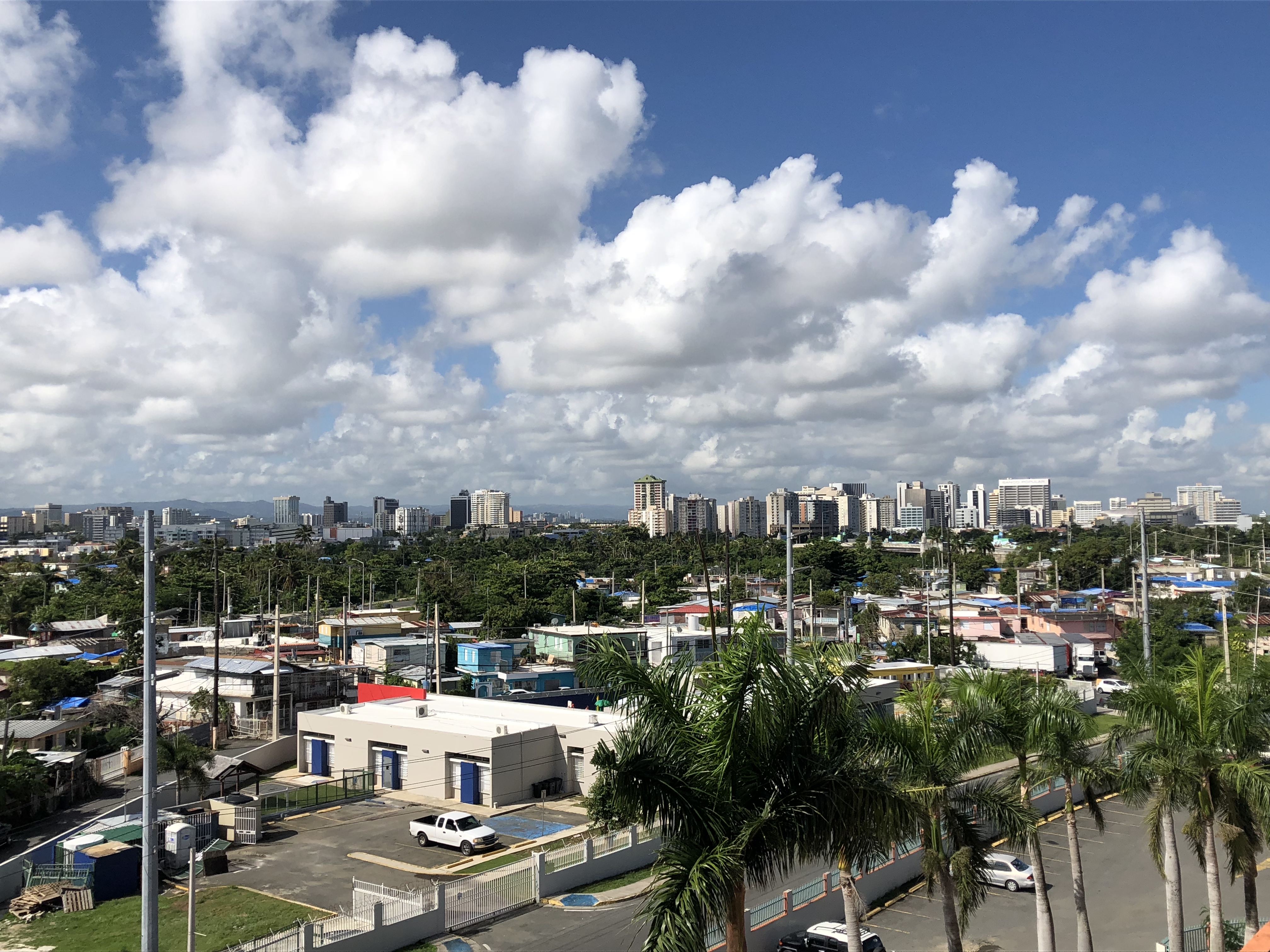 One year since Hurricane Maria made landfall, residents and advocates have been rebuilding and preparing themselves for the distribution of federal recovery funds. Espacios Abiertos, a nonprofit focused on strengthening civic engagement for communities in Puerto Rico, has been one of the groups mobilizing. As part of their preparation and learning of the disaster recovery process, they invited Texas Housers co-director John Henneberger, myself and Martha Sanchez of La Union del Pueblo Entero (LUPE) to San Juan, Puerto Rico to share their experiences in the field of disaster recovery and community organizing.

Puerto Rico and the Rio Grande Valley share many similarities – from histories with colonialism, the proliferation of informal settlements, and the large percentage of Spanish speakers, to their encounters with natural disasters When Hurricane Dolly disaster recovery programs were implemented in the Rio Grande Valley, community advocacy organizations including LUPE and Texas Housers acted as watchdogs throughout the process to ensure that residents of the communities most impacted, specifically colonias, benefitted from the housing assistance. In the Valley that resulted in over 700 families who reconstructed existing homes, were built a new house or were able to move into another residence.

While the context of Puerto Rico and the Valley are similar, the magnitude of the events, the needs of the communities and the political landscapes are not. Hurricane Maria contributed to the death of over 3,000 and caused more than $91 billion in damages. Hurricane Dolly left no reported casualties and caused $1.3 billion in damages. The effects of Maria were apparent in the La Cantera neighborhood (pictured above) in San Juan where one could see the scattered blue tarps used as roofs. Lucilla Fuller Marvel, a community planner with a long history of housing advocacy accompanied us. She described issues specific to communities developed informally, including ownership issues, the quality of homes and the lack of community planning for services. The federal investment that will be made in Puerto Rico is substantial enough to begin addressing the existing inequity in infrastructure and housing in neighborhoods such as these. It is an opportunity for disenfranchised communities to finally receive the same services that only certain parts of the city have been given. Neighborhoods can heal to be stronger and more resilient. But, recovery efforts can also lead to pork spending and political maneuvering that ends up helping those who are not the most in most need.

During this trip, Texas Housers met with a group of lawyers and professors working on legal issues and analysis in disaster recovery spending. They created a specific group called Ayuda Legal Huracán Maria that has mobilized around FEMA applications, appeals, as well as on community education and involvement in the Community Development Block Grant Disaster Recovery Plan. They discussed issues that had already come up in the process, including the FEMA’s unwillingness to release data and HUD not providing a Spanish version of the recovery plan for a community who largely speaks only Spanish. Texas Housers and LUPE shared our experiences around public information requests and our attempts to make the federal agency more transparent in sharing the disaster information gathered as well as the requirements for assistance and the guidelines for denials.

Another topic of interest for advocates in Puerto Rico was the manner title issues were addressed in the Valley.  In our experience, title problems have been common obstacles in long-term disaster recovery and as a result, title clearance is a must for housing assistance programs. Title clearance in the Valley disaster recovery program while lengthy, was seen as a remedy to future potential legal problems. In Puerto Rico, however, the proof of title requirement is out of sync with the island’s culture and regulations since property ownership can be defined in many ways and does not require legal processes per their civil codes. This means that a title is not required as proof of ownership. Additionally exchanges of property can be done verbally and don’t require documentation with the local government. It is not surprising that the FEMA denial rate for those affected by Hurricane Maria was 79%, and one of the key reasons was for was unverified ownership. While the title issues for both areas are different, the lack of attention by the federal government in preparing solutions that are reflective of the local needs and context is clear especially in Puerto Rico. Luckily Ayuda Legal PR is working to address the discrepancy in the definitions and informing those denied by FEMA of their right to appeal if denied because of unverified ownership.

One concern that differed in Puerto Rico in comparison to the Valley was the large potential for displacement through the recovery efforts. This is particularly pressing for informal communities in areas deemed “uninhabitable” or “high-risk.” Residents are worried that they will be pushed out under the pretext of safety and not be given an option to remain and improve the neglected communities that have been their homes. Disaster recovery should not be used as a tool to supplant neighborhoods and communities but rather to build them.  Residents should have the right to choose where they live, which includes staying in communities with a rich history and demand they be provided equal access to services. Environmental concerns and risks while understandable considerations for rebuilding can be mitigated. Options that mitigate hazardous concerns should be considered in a truly equitable recovery that does not rob residents of their agency by removing them from neighborhoods and relegating them to certain areas of town.

The last area of focus for many of the community advocates is assuring the money benefits affected communities and makes them more resilient. Advocates wanted to hear our experiences in ensuring that community involvement and participation guided the recovery efforts. For this Martha Sanchez discussed the context of organizing along the border and the barriers that low-income colonia residents face in the area of civic engagement. She described how LUPE mobilizes their members and offers the resources that empower them to advocate more effectively for the needs of their community. She also described the relationship between organizational allies and the different roles we played together to uplift the voices, needs and solutions of the community.  Martha also discussed the conviction and investment needed on behalf of communities to push back and demand the program work for them.

We are thankful for the invitation from Espacios Abiertos and hope that our words may be helpful to those we met as they take on one of the largest recovery efforts of the island’s history. This is an example of how our experiences in addressing disaster recovery in Texas may help other communities organizing for a just recovery. It is also a grim reminder that the disaster recovery and reconstruction process is flawed and it needs to change. We are seeing the same disaster capitalists sweeping in to take advantage of already distraught communities.  We must be advocates for one another so that we can disrupt capitalistic and colonialist ideals that drive the current disaster recovery process and replace those ideals with equity and justice for vulnerable survivors.