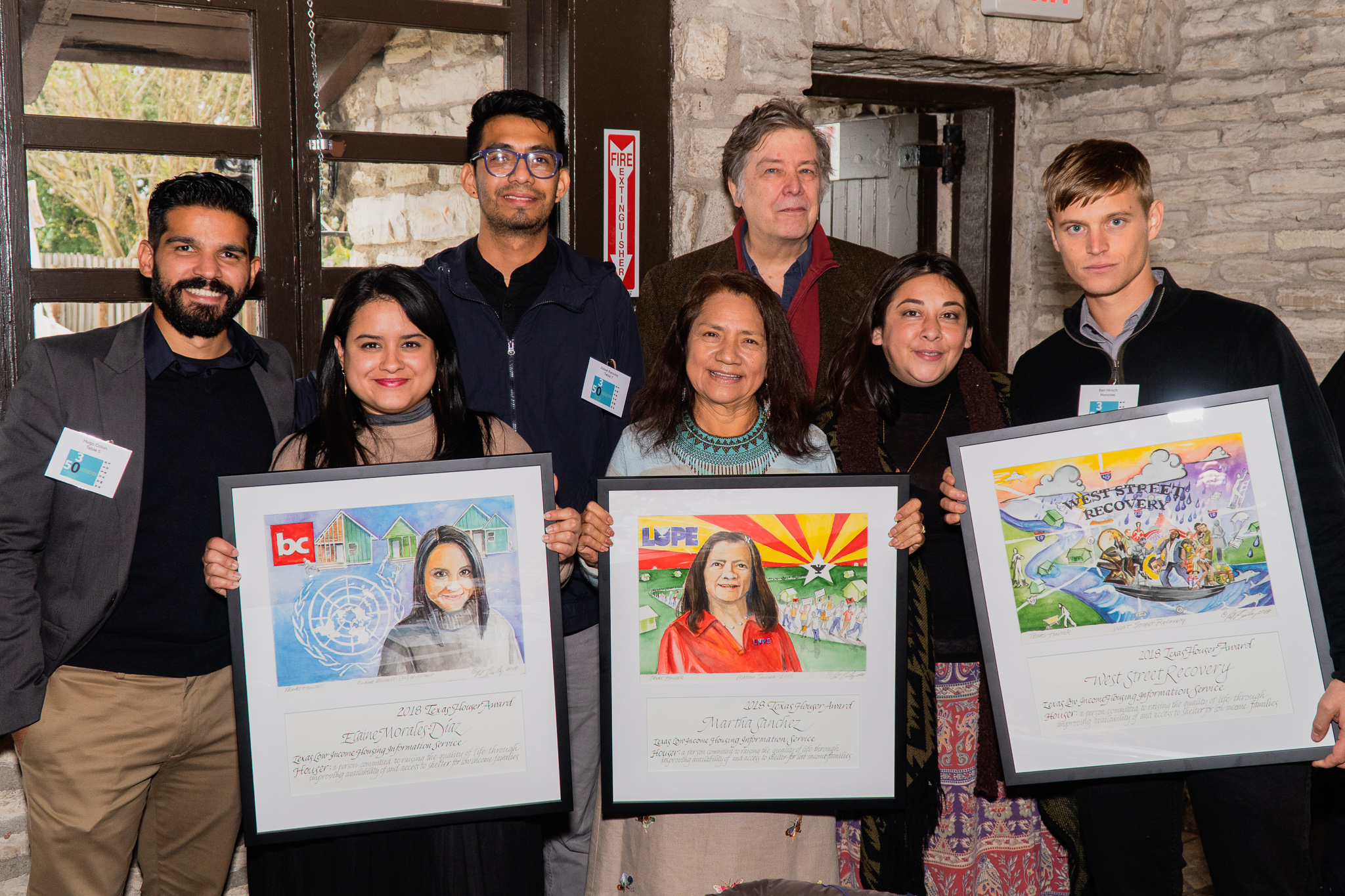 The 2018 Texas Houser Award honorees are shifting paradigms and power in their daily work for community empowerment and housing justice, and yesterday, nearly 100 community advocates, supporters and the Texas Housers staff honored their contributions.

Elaine Morales-Díaz, design manager at [bc]Workshop. Elaine leads [bc]’s disaster recovery work, including the Rapid Disaster Recovery Housing Program (RAPIDO), which in its previous pilot program in the Rio Grande Valley colonias enabled dozens of families post-Hurricane Dolly to secure decent homes that centered their needs in the design. For the past five years at [bc], Elaine has worked on projects and initiatives that promote equity and opportunity for low-income Texans, as well as advocating for just recovery processes that empower local communities to better prepare and recover from natural disasters. Elaine is now working to expand the RAPIDO model to Harvey hit areas, which in turn can help expand the model that promotes justice and dignity for disaster survivors by housing them quickly in a beautiful home that suits their needs.

Martha Sanchez, community organizing coordinator at La Union del Pueblo Entero. Martha has been organizing colonia residents in the Rio Grande Valley for nearly two decades, educating them about the roots of injustices they endure and bringing them to policy discussions with local officials to share their stories and demand change. Through her organizing and the work of La Union del Pueblo Entero, colonia residents have achieved better drainage protection in rural areas the flood frequently, Spanish translation for Hidalgo County public meetings, and recently more stringent Model Subdivision Rules, which will guide where future subdivisions can be developed and dramatically improve the quality of base-level public infrastructure the developer must provide. Her organizing work has helped boost policy expertise among residents as well as their power and capacity to advocate their own solutions to injustices.

West Street Recovery is a new grassroots group that mobilized during the torrential downpour of Hurricane Harvey to rescue people amid the rising flood water after the immediate crisis the group helped survivors rebuild their homes, one by one with the help of both community and strangers, establishing a network of people who want to see a survivor-centered disaster recovery. They have also worked to amplify the voices of hurricane survivors to advocate at the state and local level for a more equitable recovery that benefits communities of color and people with modest means.

Texas Housers marked its 30th anniversary as well as the 50th anniversary of the Fair Housing Act, reflecting on accomplishments of the houser community as a whole and the work still ahead.

Photos from the 2018 barbecue luncheon are below.

The Houser Awards are made possible by our generous sponsors and contributors:

Anonymous in honor of Robert Doggett

Housing Authority of the City of Austin

Ladies of Charity of Austin