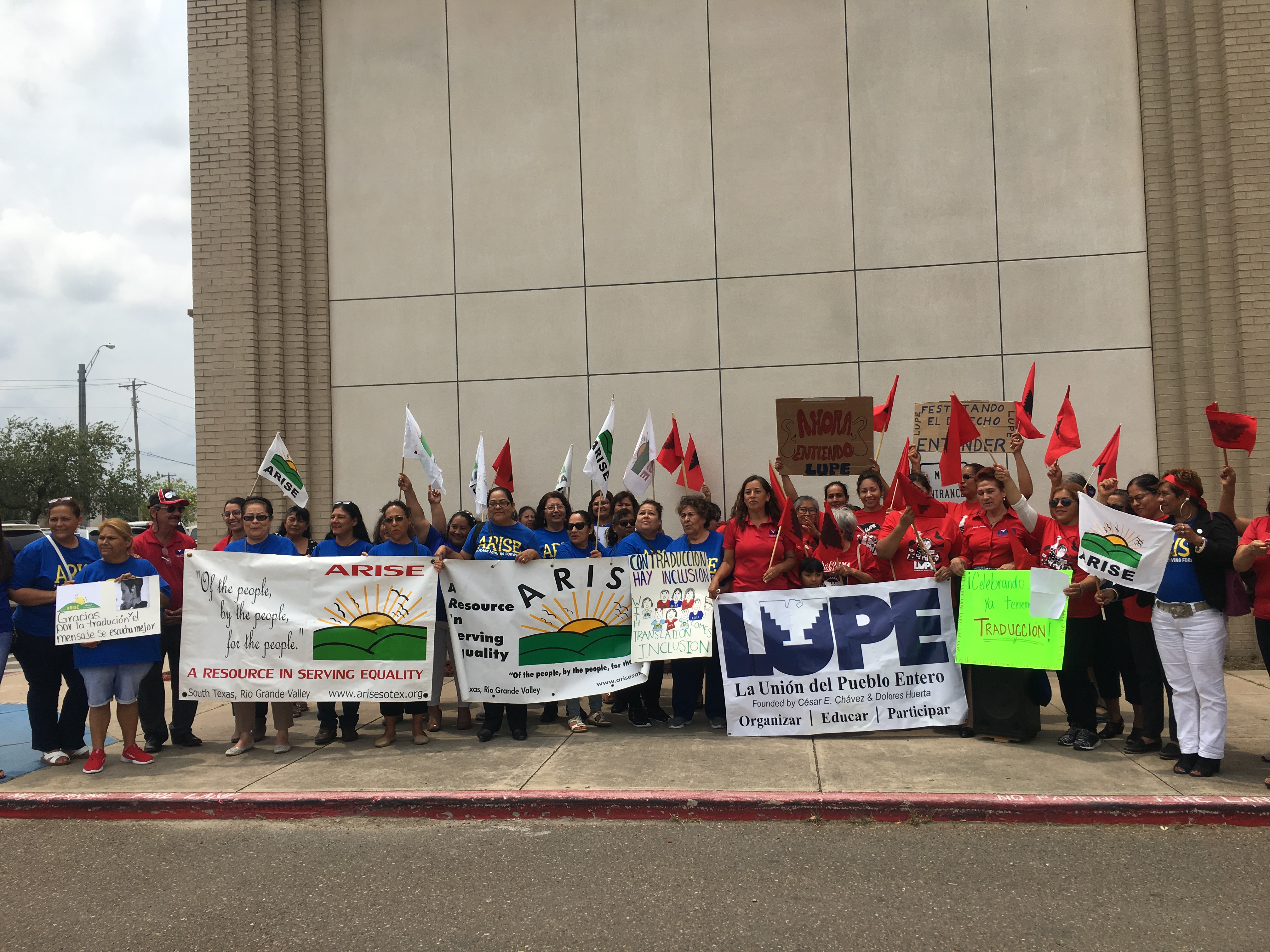 Yesterday, Texas Housers joined community leaders in the Rio Grande Valley at a press conference to celebrate a major victory for their effort in pushing for a more transparent, inclusive and just government.

For years, colonia residents with A Resource in Serving Equality (ARISE) and La Unión del Pueblo Entero (LUPE) have faithfully attended Commissioners Court and Drainage District #1 meetings, and since January of 2017 had requested Spanish translation. Though they attended to make their voices heard, Spanish-dominant residents regularly expressed feeling lost, confused, unwelcomed, and discriminated against during the meetings.

Texas Housers helped educate the groups about how Hidalgo County’s neglect in providing interpretation to residents requesting accommodations, could be a violation of civil rights requirements.

Title VI of the 1964 Civil Rights Act prohibits discrimination against people on the basis of their race, color, or national origin in programs that receive federal funds. Hidalgo County receives millions of dollars in federal grants for housing, infrastructure and community development. The law requires that all programs and agencies receiving federal grants provide meaningful access to people with limited English proficiency to participate and benefit from the federally-funded programs. Not providing translation service for non-English speakers requesting it can be considered discrimination based on national origin. According to U.S. Census estimates, about 85 percent of households in Hidalgo County speak Spanish at home and one-third of Hidalgo residents are considered limited in their English proficiency.

Members of LUPE with help from Texas Housers secured legal representation by Texas RioGrande Legal Aid to advocate for their interests. In September 2018, Hidalgo County voted to adopt Spanish language translation during county meetings and begin the search for a firm to provide simultaneous interpretation. The county also began translating agendas into Spanish for meeting attendees. It took several more months for the county to finalize a contract with an interpretation services provider, and several more months to ensure the quality of interpretation was consistent.

[“Translation is important because we want to know how to defend the rights of our families and communities,” says Alberta Ramirez, LUPE member and resident of colonia Owassa Acres. “We want to have a say in county decisions. To participate we need to know what is going on in the meetings.”]

Other leaders involved in the campaign said at the press conference that their hope is to expand their language access efforts to other public spaces, including school board and city council meetings, to ensure that they can understand how decisions of public officials affect them and their families and hold them accountable.