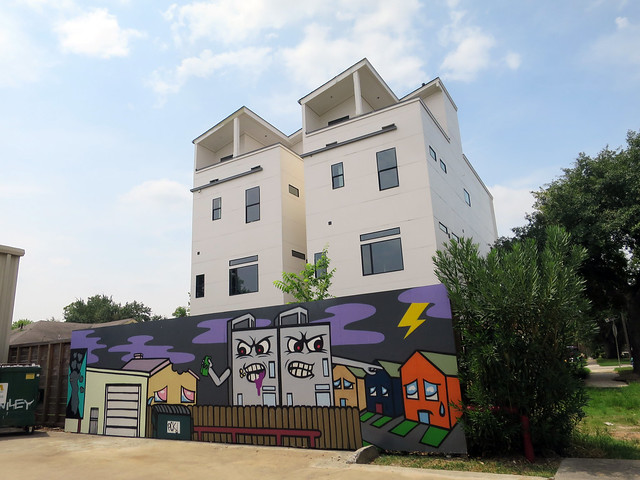 Across the country, there are numerous underserved and disinvested communities fighting for the ownership and legacy of their neighborhoods. Gentrification becomes the popular topic discussed in neighborhood and city council meetings, but does not address underlying questions about the communities it affects.

Specifically, the unanswered question that gentrification unintentionally illuminates is that we do not fully understand why communities of color remain poor. Gentrification deals with the result of wealth disparities and disinvestment but it does not deal with how the gap between these communities and others began.

Yet, it is gentrification that dominates the discussion about the plight of at-risk communities and not the reasons for the disparities in wealth. It is further not understood how these communities, especially historically Black neighborhoods, have a path to succeed when they are already accomplishing the three much-heralded pillars of success — homeownership, education, and higher incomes — but overall quality of life is not improving. Gentrification is often a red-herring, because we assume that we understand what causes poverty and have not adequately considered that our beliefs of how these communities become impoverished are faulty. This is especially true in Fort Worth’s 76104 ZIP Code.

The 76104 ZIP Code is a perfect example of a neighborhood where gentrification does not adequately explain its condition. The 76104 area is home to three Fort Worth neighborhoods: Hillside/ Morningside, Historic Southside, and the Near Southside neighborhoods. Located directly south of Downtown Fort Worth and I-30, the ZIP Code hosts one of the oldest areas in the city and, for much of its history, it has been a predominantly Black area. In 1997, the Near Southside neighborhood became the new hub for Fort Worth’s medical district through a tax increment financing strategy, and this brought a burst of development and jobs to the 76104 ZIP Code.

But, the influx of development did not have a universally positive effect on the area as a whole. A recent study by Sandy Pruitt and UT Southwestern Medical Center reported that the 76104 area in Fort Worth has the lowest life expectancy of any ZIP Code in the state: 66.7 years. If it were its own country, the 76104 would place 174th on the World Life Expectancy Chart. This would place the area below countries like Ghana, North Korea, and Iraq, and it’s located right in one of the most historic districts of Fort Worth, Texas.

Life-expectancy can be a culminating statistic that shows the effects of many socioeconomic factors and assigns them tangible, real-world consequences. With 76104 in one of these precarious situations – succeeding in the conventional wealth-building ways but still hosting a low life expectancy -– it would stand to reason that the community would like to take action toward improving quality of life.

But the bulk of 76104 residents are not people engulfed by misfortune, as some might assume. The 76104 ZIP Code has a homeownership rate of 47% for its Black residents according to the American Community Survey, above the national rate for Black people of 42% (2000 US Census, 2013-2017 ACS). The community has increased the number of college-educated residents in the area by 65.2% since 2000, and in the same time frame increased their Median Household Income from $25,000 to $26,000 adjusted for inflation in 2017 dollars, and their labor participation rate rose from 47% to 50%. (2000 US Census, 2013-2017 ACS). Although these changes are not drastic, they do not support the idea that the community is declining. Yet, the poverty rate in the ZIP Code is more than 40% and, as the report shows, residents are dying at an earlier age than other Texans.

These are residents who have been handed a different return on their investment than other communities. The threat of gentrification does not describe why the area has not appreciated over the years to prevent gentrification. What sets the stage for gentrification in communities in which people seem unable to grow wealth? What are we missing about gentrification that is so sinister to communities? The answer may be found in better understanding the racial wealth gap and how the three pillars of success in America, which the 76104 have continually built, are not helping to close the gap.

The racial wealth gap refers to the major disparities between races in the median wealth of their households. The gap can be described as a tangible metric to the history of discrimination and oppression for people of color in the United States. Wealth as a metric can track the transfers of net worth from generation to generation and aim to quantify the losses sustained from oppression in the U.S. Understanding the racial wealth gap can be a storytelling tool for communities, showing how they both build wealth or are denied wealth. The racial wealth gap may be understood as the reason why communities of color are more likely to be gentrified, but looking deeper into the data will show that normal discussions of homeownership, income, and education do not account for the gap in wealth.

The data for net worth by race shows the most drastic wealth gap exists between Black Americans and their White counterparts. For Black Americans, the total net worth is just under $10,000, while White Americans have a net worth of $130,000, according to wealth and asset data from the US Census. This means that the average Black family has 7% of the net worth that the average White family holds. To understand what occurs in communities like 76104, normal conventions of defining success must be broken and we must deconstruct how typical gauges for the American Dream do not apply to Black Americans’ position within the racial wealth gap.

First, the pursuit of education has long been considered the great equalizer for different classes of Americans, but according to Dr. Sandy Darity’s report, “What we get wrong about the racial wealth gap,” education has not, in fact, been an equalizer for Black Americans.

This data shows that Black households with a college-educated head-of-house is $12,000 less wealthy than their white counterparts with no high school diploma or its equivalent.

Figure 4 shows how even with homeownership there is still an almost $140,000 difference between Black and White wealth. According to a Brookings Institute report, neighborhoods that are 50% Black or more will be valued at nearly half the value of areas with a majority of non-Black residents. Also, Black wealth nearly disappears, dropping to a mere $120 when the households are not homeowners.

Figure 3 suggests that even at higher income levels of income, Black Americans have less wealth than the White quintile below them. In terms of savings, a study conducted by Maury Gittleman and Edward Wolff (2004) shows that once income is controlled, Black and White families do not have a great difference in savings. In fact, Black families tend to save slightly more in relation to their income.

In the case of 76104, what the racial wealth gap does not explain is why Black wealth is drastically lower than all other races in the United States. The 76104 story is about the history of slavery and Jim Crow, and not just how it affected Black Americans of the past, but how it is affecting the Black Americans of today. Redlining, segregation, urban renewal, the Highway Act of 1956, the War on Drugs, mass incarceration, sharecropping, and more have all had a socioeconomic impact on the present day. The racial wealth gap may just be a culminating statistic of all of those injustices, in the same manner that life expectancy details the quality of life in 76104. Quantifying the impact of centuries of injustice may be critical to understanding why communities like 76104 are suffering, in spite of their consistent efforts to steadily push for the American Dream.

The core of the issue in the 76104 is the misunderstanding of what caused and continues poverty in the area. What the racial gap shows is that there is a major chasm between the wealth of Black and White households, but that chasm was not built through the lack of progress in homeownership, income, and education. In fact, Black Americans have made gains in these areas, but it has not resulted in greater wealth. This is the issue with conversations of gentrification, being impoverished is not the issue; the issue is that the normal ways of building wealth are not working for Black Americans.

The article by Darity states that wealth is primarily built through the transfer of resources across generations. Meaning that the racial wealth gap is caused by many years of unequal outcomes, and in American history, this means racism and oppression. Also, this means that time will not naturally bring the gap closer. In fact, the wealth gap does not seem to be narrowing, according to the Institute for Policy Studies’ “Dreams Deferred.” The report states that median Black wealth will be $600 by year 2050, while their White counterparts will have a median wealth of $174,000. The gap is widening, while many communities and advocates are not aware of this reality.

For 76104, solutions to the racial wealth gap must build beyond individual responsibility of families, because the data shows that is simply not enough. The first step in creating a major push to combat the racial wealth gap is through research and education. Research into local data on household wealth is growing slowly. Most reports focus on income and savings, but haven’t done much to try and quantify household wealth. The National Asset Scorecard for Communities of Color (NAASC) reports are examples of research taking in-depth reviews of wealth, based on ethnicity and race in a specific locale. Cities could use this report as a model and identify what wealth looks like on a county level, city level, census tract level, and census block level. Specific local research may combat policies that try to deal with the racial wealth gap on a universal basis.

Secondly, and more granular, communities and advocates need to start telling the story of the racial wealth gap from the experiences that people already endured or continue to endure. To tell the story of the racial wealth gap, communities need to be educated on the realities of the statistics stated above and the new data hopefully obtained through more localized research. Opportunities to bring dignity back to people living in disadvantaged communities are made possible through an understanding of the racial wealth gap. Families discussing the cost of educating their children, or how their homes have not appreciated in value compared to similarly sized homes, or the many financial hurdles that people face in order to make a high income only helps to advance the cause.

In the 76104, the report of health disparities will shock many families and crystallize what is happening in the neighborhood. Through research and storytelling, we can begin to show that the true culprit is a history of racism and oppression; and in spite of their efforts to build stable communities, this history cannot be changed without significant and sweeping public and private intervention.