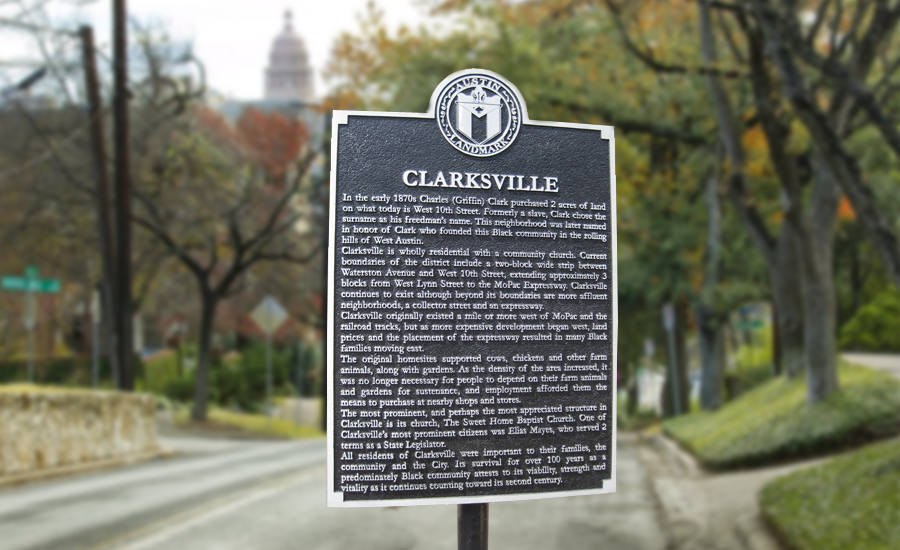 I live today just outside Clarksville, where three decades ago low income African-American families, aided by a handful of supporters, waged a landmark struggle for affordability, a fight to manage gentrification and to achieve racial and economic integration while protecting a culturally rich, historic and valuable community. They lost. We lost Clarksville. That struggle should teach us an important lesson about today’s struggle over the fate of our city.

From the 1970s through the ’90s I worked with homeowners who founded the Clarksville, Guadalupe and Blackland community development corporations. I developed a passion for the struggle of people of color with low incomes to get and to hold onto decent homes and maintain quality neighborhoods. I came to appreciate Dr. King’s commitment to achieve stable residential racial and economic integration. I came to see that what is missing in Austin is what Dr. King termed this type of “Beloved Community.”

To advance these goals, I’ve become a supporter of nontraditional housing types. When I first moved to this neighborhood 40 years ago, I lived first in a garage apartment and then a triplex three blocks west of where I live now. I worked for the nonprofit Clarksville CDC to build their early duplexes and to renovate accessary dwelling units into homes. Today, I am really excited about what Guadalupe and Blackland are doing with alternative housing types.

I’m not opposed to the City of Austin’s exploring affordability strategies like “missing middle” housing and some of the other initiatives in their CodeNext Housing Affordability Code Prescription. But affordability is not the sole answer. And the affordability tools CodeNext is considering would not, on their own, have saved Clarksville. Furthermore, the focus solely on affordability ignores the much greater problem Austin faces. That is overcoming our city’s legacy of extreme racial, ethnic and economic segregation, and repeated waves of displacement and gentrification.

Let’s consider the impact of four major strategies of CodeNext:

1) We ask, can’t we just build more housing to get the level of affordability we need?
The demand for housing in quality, close-in neighborhoods is so great that the limited number of new units we can squeeze in are not going to be enough to drive down prices.  Look here in Clarksville and you can see that, or look at condo prices in downtown. More housing product does not ensure either affordability or racial inclusion in the Austin market.

2) Can we more permissively zone or creatively design our way to affordability?
There are no guarantees that owner-occupied housing is going to stay affordable for the long term. Additionally, what’s to prevent these densities from going up in marginal, low income neighborhoods with really bad outcomes? The historical warehousing of the poor in large public housing developments in other cities teaches us how things can go wrong with inappropriate densities.

3) And then, we need to ask if neighborhood associations will agree to permit building more housing through nontraditional housing types?
Neighborhoods are not going to stand for granting developers carte blanche to use these tools, even missing middle housing, because they don’t trust that the developers will act in the long-term best interest of their neighborhoods. If we want buy-in from neighborhoods, they have to be given some assurances that what gets built and how it is managed is not going to make their quality of life worse.

Before the planners and developers jump me for my heresy, let me be clear that I do think we need to permit these strategies as a part of the solution. But I would tie the use of these strategies on a carefully targeted basis, to be deliberately undertaken as part of a development plan to expand inclusion. These code changes should not be implemented on a blanket bases, but should be tailored to the neighborhood to achieve economic, ethnic and racial diversity.

Austin must promote, as a public policy, economic and racial diversity across all neighborhoods and should reject the ghettoization of affordable housing into City-designated districts.

We need a new housing and community development paradigm. One that understands that neighborhood quality and financial security is enhanced not by the homogeneity of real estate prices but instead by the quality of life produced in diverse neighborhoods. A paradigm that redefines the role of the real estate developer from focusing on the development of a single parcel into a new role of community developer.

A new paradigm will be a politically heavy lift. President Eisenhower warned of a military-industrial complex; Austin has a developer-industrial complex. It took control of our city’s political system long ago. And in the instances when it does not get its way at city hall, the developer-industrial complex knows how to overturn local control by appealing to the state legislature. That’s why Texas is the only state that has outlawed inclusionary zoning and outlawed city ordinances to prevent discrimination against low income housing voucher holders.

I do not favor giving tools being discussed by CodeNext across the board to developers. The only entity we should be prepared to trust with the tools of radical density, new housing types and waivers of the existing host of neighborhood protections is the neighborhood residents themselves and a community developer who is working to build for long-term economic, racial and ethnic diversity.

Proposing to waive park land, watershed, heritage tree, historic preservation, neighborhood compatibility standards, etc. as an across-the-board trade-off for affordability is unjust. It’s unjust to the families that live in these second-class neighborhoods. If these are important values for Austin, then all neighborhoods should enjoy these protections. For too long we’ve had two standards of neighborhoods in our city: One for poor and one for rich, one for whites and one for people of color.

Austin should begin its search for a solution by asking what it is that we are concerned about achieving. It includes affordability. But it goes much deeper than affordability. We want a quality of life that depends on diversity and inclusion and not just on the rate of real estate appreciation and profits for developers. The value of appreciation of our homes is actually harming more of us than it’s helping through rising property taxes. There’s no better place to remember this then here in Clarksville.

We sacrifice and we work hard because we want to live in Austin. Many of us say we do this because we like our city’s energy, vitality, diversity and weirdness. But, what do we ask from our neighborhood? A lot of it is surely location, location, location. But it’s also neighbors, culture and diversity. Are these factors only important for the city as a whole? Of course not. If anything, they are more important to us at the neighborhood level because that’s where we spend so much of our lives.

So I’m suggesting that our first step should not be rewriting codes and adopting new plans but instead building a community consensus around how we want to live and whether we’re ready to work for economic and racial diversity at the neighborhood level.

I am sure that a lot of folks are just fine with things the way they are. But, my read of Austin is that a lot of us want to live in an inclusive community and we are not happy with the way our city is going. In those places where people want to act, we need to give them tools to make it happen.

But what about those neighborhoods that don’t want to provide for the inclusion of people of color and people with lower incomes? In those cases, as a city, we need to say, “You got to find some space in your neighborhood.” If you want to take the responsibility, the City will give you the financial resources and the development tools to provide for that inclusion. You can direct it and you can carry it out as a neighborhood. But if you don’t want to do it or work with a developer to do it, then we as the city will give those tools to responsible developers, the housing authority, nonprofit housing developers, or, with appropriate controls, private developers that will take the initiative to make it happen in the interest of the people who need the housing and also in the interest of what’s best for the long-term residents of the neighborhood. We’re talking sensitive and responsible development. But we are also talking about a community wide commitment to end segregation and guarantee inclusion.

We should not roll this initiative out all at once. We should allow neighborhoods that want to proactively use the development tools and the city resources to shape the future of development within their neighborhoods by providing for inclusive housing to get us started off. The successes that I’m sure will occur (based on the successes which are occurring in Guadalupe and Blackland) will make this a less scary and intimidating process and will provide models for the type of development that can protect neighborhoods and achieve inclusion and diversity.

One problem, of course, is this is going to be controversial. And it’s going to take time to build enough support to broadly implement. But you could also say all of this about CodeNext. What’s more, what I’ve outlined does not have to be implemented across the board, all at once. Neighborhoods can experiment, learn and can lead others by example. Neighborhoods that are threatened by harmful development will pick up these tools and use them proactively to shape the future direction of their communities in a manner that works for them and that benefits our city.

I’m excited about missing middle housing and CodeNext and their contributions to a new development paradigm that empowers neighborhoods to set up and use these tools to become even greater places and turn themselves and turn our city into a vibrant, diverse and inclusive community. That would be a great legacy from Clarksville’s struggle.