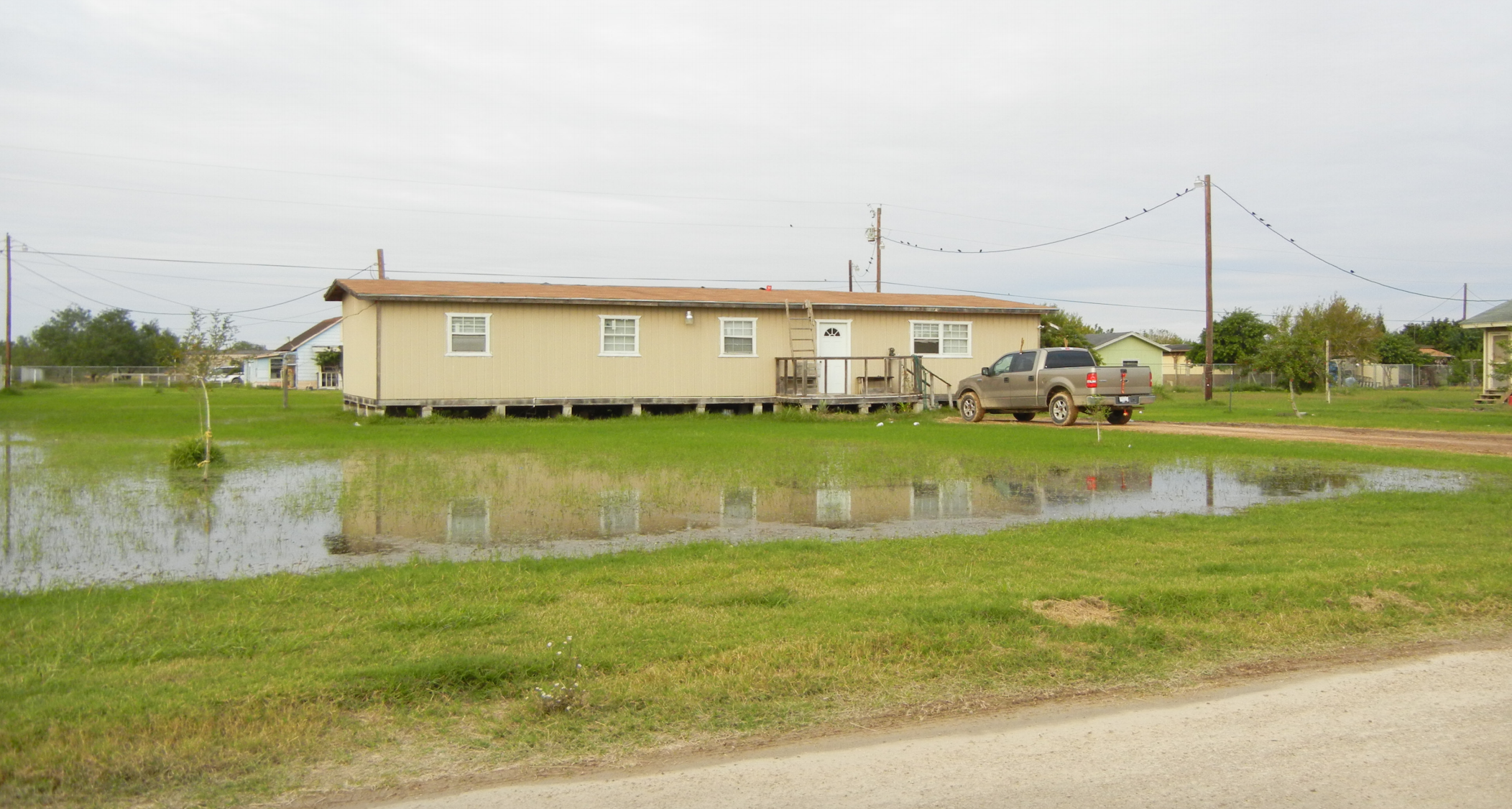 This piece originally ran as a column in the McAllen newspaper, The Monitor, on September 12, 2016. Pictured above: Lot flooding after a regular rain event in the Spanish Palms colonia in Mercedes (picture from [bc]Workshop).

The Zika virus is seriously endangering the safety and future economy of the Rio Grande Valley. Its spread here is likely, if not inevitable, and it is vital that residents take precautions to protect themselves and their neighbors against transmission.

But the dangers of the Zika virus will not alone be eliminated by insect repellant and long-sleeved shirts — not while the chronic lack of basic drainage infrastructure exists in so many Hidalgo County communities, which produce the exact conditions that are necessary for the virus to thrive.

An Aug. 29 column in The Monitor by state Rep. Terry Canales, D-Edinburg, laid out the basic facts about Zika, including its symptoms, health hazards and how it is transmitted by mosquitoes. Zika can lead to severe illness and is particularly threatening for pregnant women because it can cause birth defects like brain damage and microcephaly in babies. While informative, the column concluded by pointing to individual responsibility as the main defense against the virus. Canales, however, did not mention the systemic regional issues that make an outbreak such a looming threat.

The attention on Zika prevention from elected officials is admirable and necessary, given the immediacy of the problem. Although there have not yet been any reported cases of Zika in Hidalgo County, the virus is already present in other parts of the Texas Gulf Coast, which has similar weather conditions. But unless our leaders consider comprehensive, region-wide solutions — which focus on the heart of the problem, not just immediate actions from individuals — Valley residents will be in danger.

Individual-focused answers stress the importance of residents removing standing water, where mosquitoes breed, from their yards. As local leaders know, that is not so simple for many residents, particularly in the colonias. Colonias were developed without any oversight or infrastructural investment from the government and lack essential public services, such as functional sewage and stormwater drainage. In these communities, no amount of personal care on the part of a homeowner can eliminate the street and property flooding that occurs nearly every time it rains.

In 2015, the Texas Water Development Board completed a drainage survey of 403 colonias throughout Hidalgo County, just a portion of the colonias in the Valley. More than half of the colonias surveyed, 274, were in need of drainage maintenance to properly dispose of stormwater. In 154 colonias, residents stated that standing water lingered for three days or more after a rain event — the same amount of time that mosquitoes need to breed.

Those 154 colonias represent an estimated 10,700 households that could be exposed to the Zika virus after any rainstorm, regardless of personal preventative action. If residents get rid of old tires and buckets, that collect standing water, but water still collects in neighborhood ditches or retention ponds that sit in colonias because there is no connection to a regional drainage system, then the threat of Zika remains high.

Our current drainage system, or lack thereof, fails and endangers low income communities. No one should have to experience flooding that damages their home and puts their families at risk. We depend on public services to improve our quality of life, not make it harder for our communities to thrive. Colonia residents have the right to expect public investment that protects the health of mothers and children.

Valley residents should pour out standing water, invest in repellant if they’re able and wear protective clothing. But just as individuals are urged to take action to reduce mosquito bites, it is imperative that municipal, county and state officials actually work to address the regional flooding and drainage issues that are the real problem, especially in the unincorporated county and colonias. Rather than passing the buck to some of their most vulnerable constituents, officials can become champions for equitable drainage and infrastructure improvements that will prevent the Valley’s low income communities from becoming the front lines of mosquito-borne epidemics time and time again.

To get there, we need local leaders to channel sufficient resources to improve drainage in the colonias most in need, and modify regulations so that the future developments of subdivisions do not repeat the same mistakes. Colonia residents must have a seat at the table and a voice in the decisions affecting their lives and homes, because when we tackle problems collectively, everyone benefits. If Zika is transmitted in a colonia, it will not stay there — the virus will put all Valley residents at risk.

Our elected officials need to understand that systemic failures in drainage are hazardous to the entire region, and that working together to address the root of the problem is better than leaving families to go it alone.