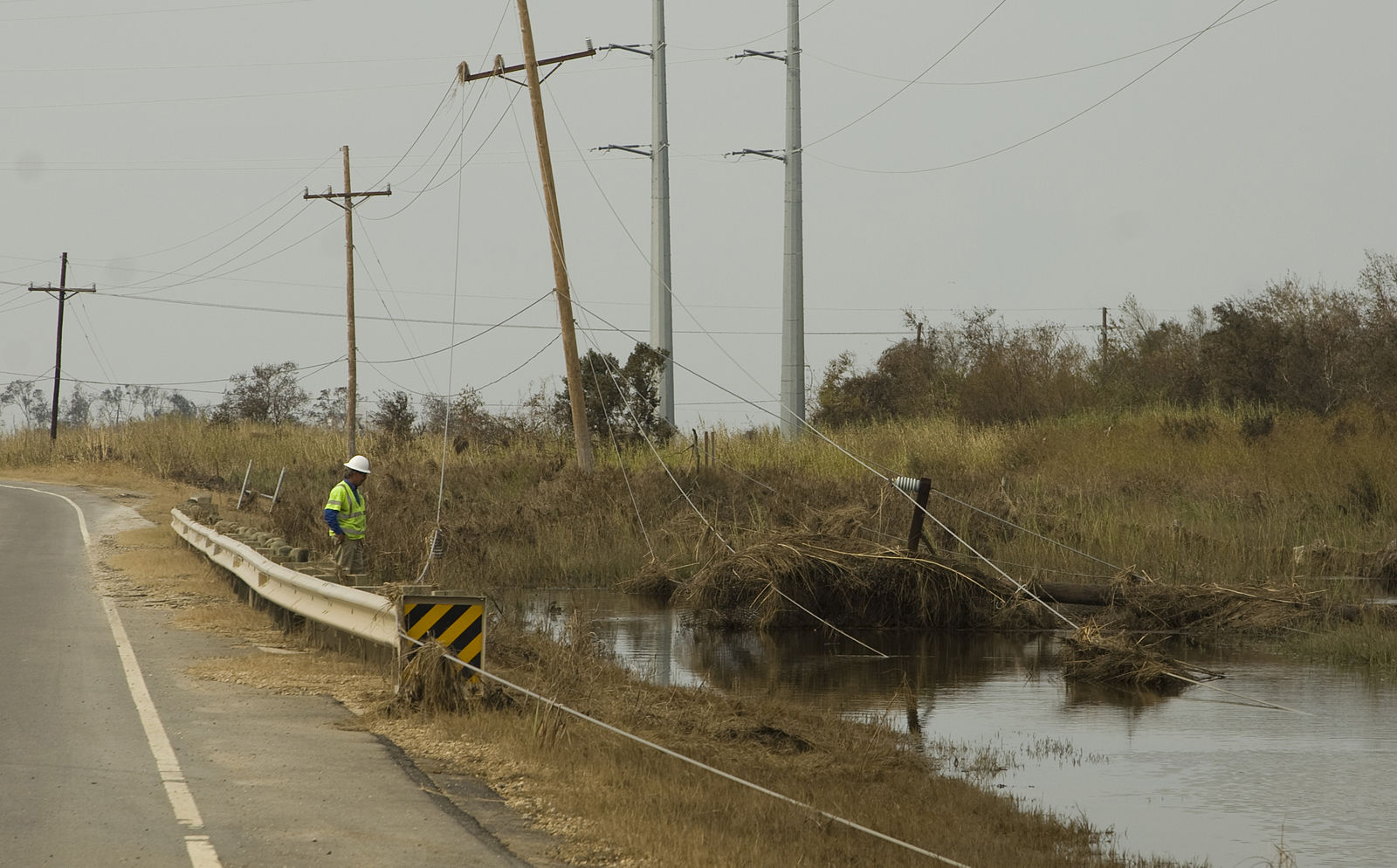 (Photo: A lineman checks on a downed powerlines in Port Arthur)

In the last blog on Port Arthur, we predicted that Texas counties and cities, overwhelmed after a disaster as large and as costly as Hurricane Harvey, will flounder without state guidance. We know from the people on the ground in the Golden Triangle region that recovery is slow. This painful, delayed recovery is a direct result of Texas agencies’ inability or unwillingness to plan for a disaster and devolution of planning and resilience-building to local governments, however small or unsupported they may be.

In February of this year, Governor Abbott announced that FEMA would be providing over $1 billion dollars in the Hazard Mitigation Grant Program to Texas in the aftermath of Hurricane Harvey. The Texas Department of Emergency Management (TDEM) was designated as the agency to administer the program. But so far, the program doesn’t seem to be reaching the places it needs to be.

According to FEMA, hazard mitigation projects are “any sustainable action taken to reduce or eliminate long-term risk to people and property from future disasters.” This is not disaster relief funding to make repairs or return lives to normal, but funding intended to fortify cities and counties against potential future disasters. In the Texas applications we reviewed, jurisdictions and non-profits requested funding for drainage projects, backup generators, studies, community safe rooms, buyouts, and many more endeavors.

One of the unique requirements of the program is that FEMA will provide only 75 percent of the cost of a project, and the applicant must supply the other 25 percent. Larger cities and counties with deeper pockets are already at an advantage in applying for, securing, and matching these funds. The temptation for a city or county to redirect available CDBG funding from low- and moderate-income people to meet the match requirement is very high. CDBG is supposed to be used for the primary benefit of low- and moderate-income people but some cities put this toward projects that don’t specifically benefit them. For example, TDEM has recommended applications in Bay City and another in Palacios for improvements to water treatment plants that the localities state will use CDBG funds for the required match.

But what else is happening with Texas’ $1 billion in mitigation money? TDEM is both recommending applications and providing alternates for FEMA’s approval on a rolling basis. There is no deadline but money is actively being allocated. Through public information requests we have found that:

A Decentralized Recovery in Practice

The disparity in funding to this region, despite clear data on the damage left by Hurricane Harvey, is one result of the state agencies’ insistence on a local-driven recovery. Without a better base level of capacity to respond to these disasters, a recovery will be unequal across cities and counties. Clinton McNair works with Texas Housers as a community navigator in the Golden Triangle region. “The state should provide assistance in some form,” he says after seeing how slow recovery has been. “However,” he adds, “the state has not shown the ability to repair disasters of this magnitude in an equitable way. I feel the best way to complete this is to bring in experts that are knowledgeable in disaster recovery.”

Unequal recoveries rebuild Texas at the expense of low- and moderate- income people and communities of color, like Port Arthur. Tiny towns don’t have the resources to assemble applications in the same way. Not all of them have the institutional knowledge to navigate a recovery or the means to hire consultants who do.  “These counties and the cities – a number of them – are struggling to come up with detailed plans to actually do the hazard mitigation projects, and to come up with cost structures that they can then submit to the state and the feds for these grants,” says Mike Ward of the Houston Chronicle.

When Governor Abbott reminded local jurisdictions about the hazard mitigation money in a letter to county judges, he made it clear that applications were to be accepted on a rolling basis, and that some known projects were already being evaluated by TDEM, without a prepared, formal application.  TDEM clearly understands the need to reach out to local jurisdictions in need of this funding. Which projects received that preferential treatment — and why? Did the Golden Triangle simply not make the cut?

Fig 2. A map of Texas counties with the Declared Disaster Area for Hurricane Harvey. Note Harris County, Aransas County, and the Golden Triangle.

So far, TDEM’s administering of the mitigation grant program has proved to be a great example of the way localities are left to fend for themselves and are struggling because of the state and state agencies’ disinterest in playing an active role in recovery. According to FEMA data, Hurricane Harvey hit Port Arthur and the larger Golden Triangle region hard, as seen in 1) the number of homes with over one foot of flooding, 2) the number of homes FEMA declared “destroyed,” and even though we have expressed many concerns about using this data, 3) the FEMA verified loss. Yet, as shown in the maps, the mitigation money isn’t going to the Golden Triangle.

Fig 2. Number of homes that flooded with more than one foot of water.

This first map shows the number of homes that were flooded with over one foot of water during Hurricane Harvey. This is a significant amount because the standard placement of electrical outlets in the home construction is between 12 and 16 inches. With that amount of flood water, significant and costly damage to electrical systems is common. Here we see two major hotspots; the first between Harris county and the Gulf of Mexico and the second over the Golden Triangle. In all of these maps, applications that TDEM has selected as primary or alternate applications to receive HMGP funding are marked with approximate locations in green and yellow, respectively.

In this first map we see the raw number of houses that FEMA declared “destroyed’ following Hurricane Harvey. These are structures that FEMA has declared “permanently uninhabitable.” There are three hotspots for destroyed homes: Rockport, Harris County, and the Golden Triangle. Again, the hazard mitigation  applications that TDEM has recommended are marked and again there exists an incongruity between damage and the distribution of TDEM’s selected grant applications.

Finally, considering the median values of FEMA verified losses across the counties we see some of the same areas suffering higher losses. While we have expressed many concerns about FEMA’s methodology behind “verified loss” and how it underestimates the losses suffered by low- and moderate-income people, this map still shows, even by FEMA’s existing data, that the Golden Triangle is in need of disaster relief and hazard mitigation funding.

When Abbott initially announced the hazard mitigation grant funding, he said “While this announcement is another important step toward recovery, we still have more work ahead of us, and I want to reassure every Texan impacted by Harvey that we will not let up until your homes and communities are restored.” We agree that there is still more work ahead but a year later we haven’t seen the State of Texas act on this promise to serve every Texan in the wake of Harvey. “If the state intends to help with recovery” says Clinton McNair,  “it will need to provide viable resources that small cities can use.” Until then, Port Arthur and the Golden Triangle are doing what they can.