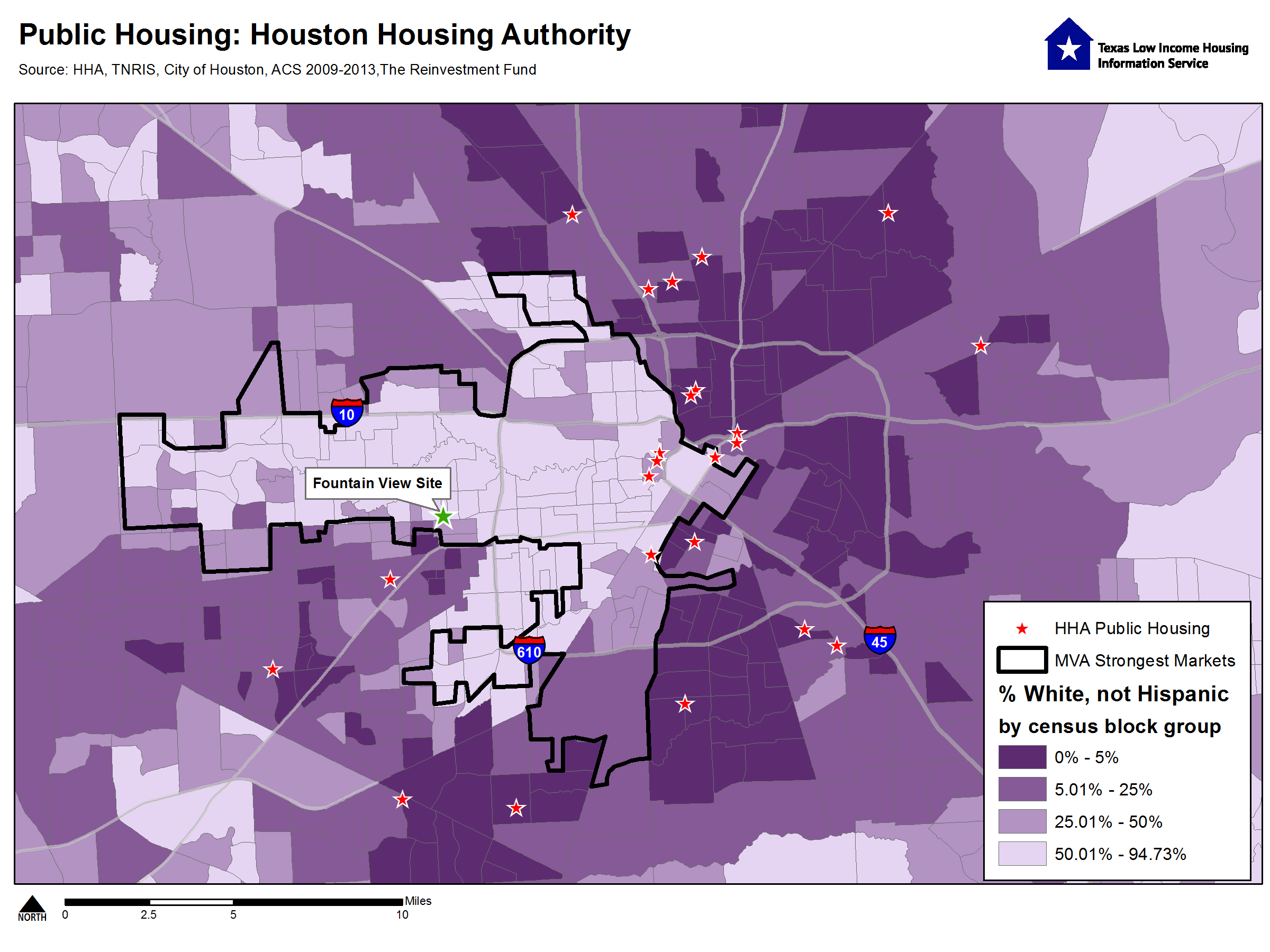 (Update: After receiving a great deal of feedback on this post – see the comment section below – we posted an in-depth statement on our position on the Fountain View Apartments.)

The Houston Housing Authority has proposed a new mixed-income apartment development on Fountain View Drive, next to the agency’s headquarters in west Houston near the Galleria shopping mall. Unlike nearly all other HHA developments (identified by stars on map above), the site is in a high opportunity neighborhood inside the affluent, largely white area of Houston known as “The Arrow” (outlined on map above). But, following an all-too-common trend, the proposal has been met with significant pushback from some of the area’s residents.

Opposition to affordable housing projects in wealthy communities, in the Houston area and around the state, creates intense (and often successful) political pressure to block development. The stated reasons for opposition are varied, from worries about increased traffic to barely-veiled racial dog whistles about the people who might live in the new affordable complexes.

In the case of the Fountain View site, community groups have raised concerns that the development will contribute to the overcrowding problem in the neighborhood’s public schools. Is this a legitimate fear? Or is it another excuse to keep low income people of color out of The Arrow?

Briargrove Elementary, the nearest school to Fountain View, is currently at capacity and capped for enrollment. Two other neighborhood elementary schools are also at capacity. So while overcrowding is currently a problem in the area, a new elementary school with space for 750 students, Gov. Mark White Elementary, will open in the fall to accommodate the neighborhood’s population growth. The HHA development on Fountain View would not open until the summer of 2018 at the earliest.

Further undermining the overcrowding argument is the fact that the proposed development would not allow for large families. Of the 233 units at Fountain View, only one-third would have two bedrooms and none would have three bedrooms. HHA’s occupancy requirements state that a maximum of two people are allowed in each bedroom and that children of different genders can’t occupy the same room.

Based on the occupancy rate of similar-sized apartments in their current developments, HHA estimates that 120 children between the ages of zero and 18 would live at Fountain View. An estimated 42 would be of elementary school age.

It seems unlikely that the addition of 42 elementary schoolers to a neighborhood, more than two years after the opening of a new school with room for nearly 18 times as many students, would significantly contribute to overcrowding. Perhaps public housing opponents aren’t aware of the low impact that future Fountain View children would likely have on nearby schools. After all, one opponent told the press that she expects “300 more kids on the waiting list at Briargrove” if the HHA development is built.

But if the primary concern of residents is a numerical increase of children in a crowded neighborhood, it’s reasonable to assume that concern would extend to any new large development, not just public housing. Forty-two new upper-middle-class children at a public school impact class sizes exactly as much as 42 new low income students, after all.

Despite being larger developments than Fountain View, with more room for families, none of these complexes faced any objections from the community. It seems clear that school overcrowding is only a concern in the neighborhood when the new students would be from low income families of color.

Reams of research demonstrate that living in a high opportunity area near good schools, like the area around Briargrove, vastly improves the outcomes for a low income child later in life – they are more likely to receive a better education, grow up healthier away from the negative effects of violence and ultimately earn a better living. Children who currently live in public housing in Houston are mostly excluded from those opportunities. The Briargrove attendance zone is a very different kind of neighborhood than most of the places where HHA sites are located, and an example of the kind of high opportunity area that can boost a child’s success.

When residents of high opportunity areas rally against affordable development, there are often very real consequences: The barriers keeping away low income people of color get higher; the doors to good schools and improved chances for children are shut.

A campaign to block the Fountain View project is already in motion. Congressman John Culberson, responding to the voices of exclusion in the neighborhood, has called on the federal government to stop the development. According to an ABC-13 report on the controversy, the community can “expect a full fight, including…protests, in the months ahead.”

If public housing opponents win that fight, who loses?

HHA has proposed that 70 percent of the units at Fountain View would be designated for families earning 60 percent of the city’s median family income or less. That means a family of four would need to earn less than $41,580 per year to qualify.

That isn’t a living wage in Houston – but it’s more than many hardworking adults earn. If you’re a single breadwinner with children, you might want to live in a high opportunity area near your job or good educational opportunities. The Fountain View complex could be a new home for many public servants who earn less than the development’s income standard:

As the “fight” around Fountain View moves forward, it’s important to remember that these are the people whom the housing opponents would exclude from their neighborhood, all in the name of a trumped-up, inconsistently-applied overcrowding argument – or, perhaps, something else left unsaid.

45 comments on “What’s behind the opposition to public housing in a high opportunity area in Houston?”