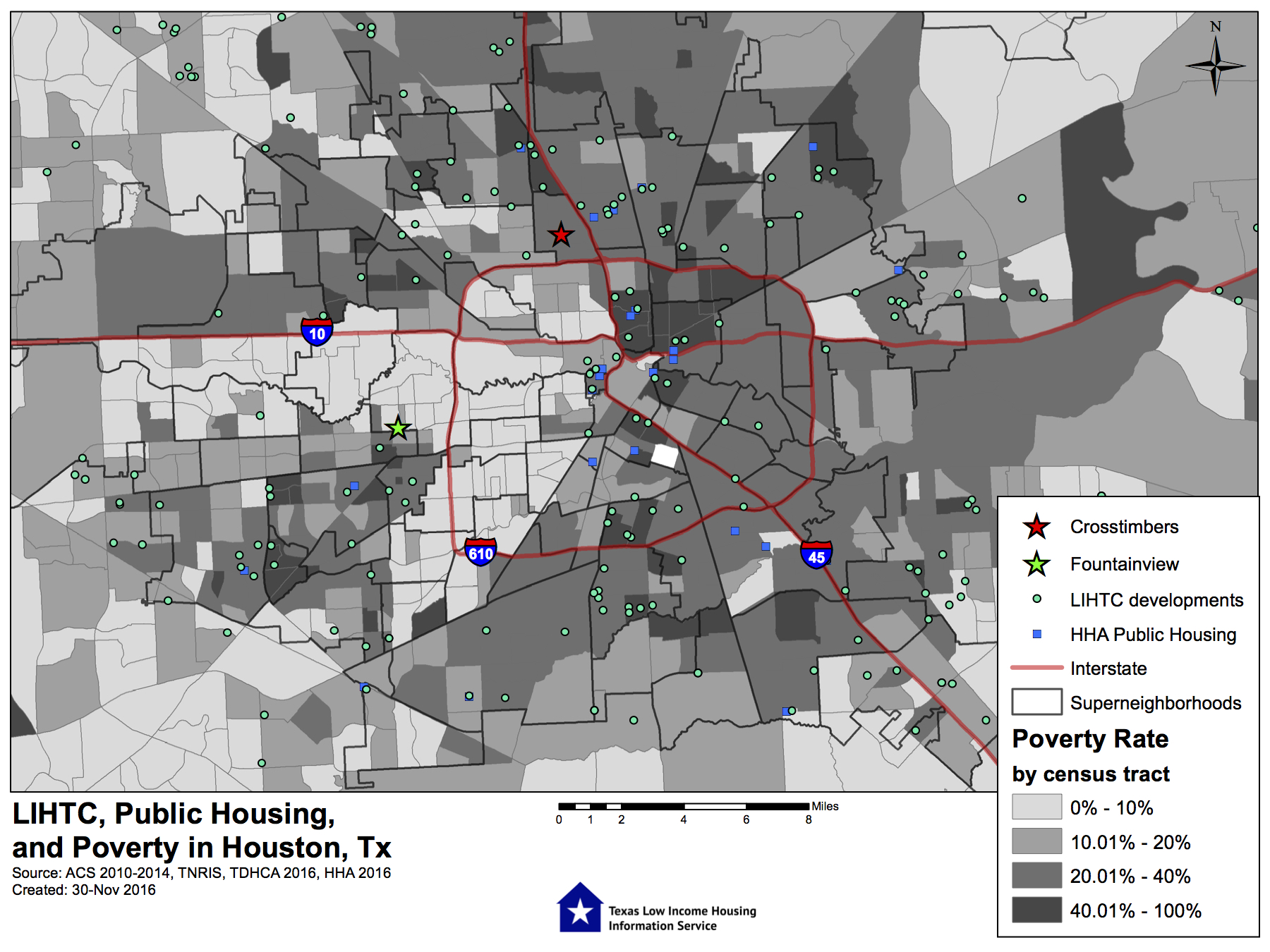 In recent months, the City Council has considered two development proposals from the Houston Housing Authority (HHA). One, on Crosstimbers Street in Independence Heights, is located in a largely African-American and Hispanic community, the kind of neighborhood where almost all affordable housing in Houston is located. The other, on Fountain View Drive near the Galleria, is in a more affluent, predominantly white part of town – the kind of neighborhood where HHA has never affirmatively invested in housing.

The map above shows where Crosstimbers (red star) and Fountain View (green star) are located in comparison to other HHA sites and developments built with Low Income Housing Tax Credits (LIHTC). The darker a neighborhood is shaded, the higher its poverty rate. Here’s the same map with poverty replaced by race. Notice how subsidized developments are almost exclusively in the less white, lower income neighborhoods outside the area of west Houston known as “the Arrow” – the same area where the Fountain View site would be built:

Zooming down to the local level, here’s how the racial and economic characteristics of the Census tracts around Crosstimbers and Fountain View compare to Houston as a whole:

The area around Crosstimbers is more segregated and less affluent than the city average, the kind of neighborhood where nearly all affordable housing is already concentrated. The neighborhood surrounding Fountain View is the type of “high opportunity” area where subsidized housing never gets built.

That’s why the developments were originally proposed as a package deal, after HHA, HUD and fair housing advocates including Texas Housers and Texas Appleseed reached an agreement: Two neighborhoods would receive new housing while HHA begins to desegregate its housing stock and offer tenants some measure of choice in what kind of neighborhood they want. In fact, HUD has explicitly warned the City that it cannot build Crosstimbers without also building Fountain View, as the latter development is necessary for Houston to meet its fair housing obligations.

But earlier this year, the mayor refused to put Fountain View’s application for housing tax credits before the City Council for a vote – effectively blocking the development, because without a resolution of support or no objection from the Council, the project cannot move forward. Then, at the end of November, the Council rubber-stamped tax credits for Crosstimbers and sent it on to the board of the Texas Department of Housing and Community Affairs (TDHCA), which gave final approval to the application at its meeting on December 15.

The mayor claims his decision to block Fountain View is based on its cost, not the angry response to the proposal from some of the surrounding neighborhood’s residents and elected officials. The development’s per-unit cost is an estimated $240,000 – about 6 percent higher than the estimated per-unit cost for Crosstimbers. If even 6 percent is too high a price to pay, given the extreme financial disparities of the neighborhoods detailed above and the expense of purchasing land in affluent areas, is the City ever going to agree to develop in a low poverty neighborhood? Will fractional budget considerations always be used as an excuse to avoid housing desegregation?

The Obama administration has questions too: In response to the City’s rejection of Fountain View, HUD launched an investigation of the City of Houston for possible violations of Title VI of the Civil Rights Act and the Fair Housing Act in its siting of subsidized housing. The results of the investigation are expected to be released soon.

Even under federal civil rights investigation, Houston leaders have moved forward with the Crosstimbers site while blocking Fountain View. It’s part of a larger pattern of limiting tax credit housing to segregated neighborhoods. The City Council almost always supports or offers no objection to subsidized developments in minority-concentrated, lower-income areas. Just since 2014, the City Council has let tax credits proceed at the following sites, shown here by their location in the city and by demographics. Blue areas are neighborhoods where more than half the population is non-white, red areas show neighborhoods where the average median family income is less than 80 percent of Houston’s and orange areas show neighborhoods where the poverty rate exceeds 20 percent:

The disregard for race and poverty in City housing decisions means that the tenants of tax credit developments have little choice but to live in segregated, high poverty neighborhoods. Concentrating affordable housing compounds segregation: According to TDHCA’s 2015 Housing Sponsor Report, the population of tax credit housing in Houston is 58.7 percent African-American and 37.2 percent Hispanic. People who use Housing Choice Vouchers from HHA are 88 percent African-American. Voucher holders also have no real choice but to live in subsidized units in predominantly minority areas:

Providing affordable housing in all neighborhoods, not just those like Independence Heights, breaks down barriers of segregation, opens up new opportunities for tenants and avoids the harmful concentration of poverty in minority areas. An abundance of research shows the damage of concentrated poverty on residents, especially children. Low income children who are given a chance to live in a high opportunity neighborhood go on to earn a much higher future income. Children grow up happier and healthier in safer, less stressful environments. Minority students are much more likely to attend college when they attend integrated schools as opposed to racially concentrated ones.

School quality is of particular importance for fair housing, but it has been used in Houston as an excuse to keep low income families out of the affluent community around Fountain View. Children living in current HHA developments are very likely to attend a low-performing schools – as the chart to the right shows, of the 19 elementary schools nearest to HHA multifamily sites, more than half received a failing grade from Children at Risk in 2015. Just two of the schools attended by children from HHA housing, representing just 3 percent of the agency’s total apartments, received a grade higher than a C.

This year, Children at Risk gave Briargrove Elementary, the school closest to Fountain View – and the site of a contentious public meeting where residents claimed that subsidized housing would overcrowd the school and bring down the value of the neighborhood – an A grade. The closest school to Crosstimbers, Kennedy Elementary, received an F. Briargrove’s student body is 27 percent economically disadvantaged; Kennedy’s is 87 percent. The City’s actions on Crosstimbers and Fountain View have real consequences for families: Instead of an opportunity to live near one of the best schools in the city, tenants get yet another subsidized development built near a failing school.

Let’s be clear: Independence Heights deserves more public investment in its schools, its safety and services, its infrastructure and in improving its housing stock. Neighborhoods with higher poverty need comprehensive investment, not just more subsidized housing, which does not lead to community revitalization on its own. The community around Crosstimbers warrants a real plan for reinvestment with repair and replacement of subsidized housing as one component.

The issue is not with the Crosstimbers development, but with the City’s failure to balance this investment and those like it with integrative developments in low poverty areas. Without Fountain View or an equivalent development in a high opportunity area, the City of Houston cannot be allowed to continue its legacy of housing segregation that violates the right of every family to choose where to live.