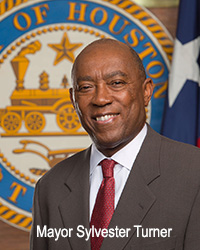 Government-subsidized housing in Houston is among the most racially and economically segregated in the country thanks in large part to the policies of the city government. Last year, following a massive turnout of white neighbors protesting the development, Mayor Sylvester Turner blocked construction of the first affordable apartments to be built by the housing authority in a racially and economically integrated neighborhood.

In the wake of the mayor’s action, a federal civil rights investigation was launched. On January 13, the federal government found Mayor Turner and the City of Houston in violation of Title VI of the Civil Rights Act of 1964, based on the results of the sweeping fair housing investigation.

In today’s Houston Chronicle, Mayor Turner declared he would,”utilize all possible avenues” to overturn the integration order. The mayor makes the spurious argument that the Houston Housing Authority’s proposal, to build for the first time a few new affordable housing units outside racially segregated, high poverty neighborhoods, is akin to compulsory bussing for school integration.

In fact, no one, except the mayor himself, is telling anyone where they have to live.

At issue is the mayor’s stubborn refusal to permit the building of a few affordable housing units in the type of neighborhood that, historically, City and housing authority officials have forbidden public housing residents, mostly African-American families, from choosing to live in.

Illustrating the newspaper story is an 83-year-old woman who does not want to leave her historic African-American neighborhood. The story omits the fact that the housing authority is building, at Mayor Turner’s urging, more than 100 additional, new units of public housing in the neighborhood where the woman lives, many are set aside for the elderly.

What’s more, no one is, nor should anyone be, telling an 83-year-old woman, or anyone for that matter that she has to move. This is about mothers with young kids in one of the D- or F-rated schools that serve the existing public housing developments. This is about giving less than one percent of Houston’s families living in public housing the option to choose to live outside historic neighborhoods of color, close to jobs and near a good school.

In the newspaper story Mayor Turner cites as his reason for preventing the housing from being built his objection to having being made to ride a school bus to go to another school outside his neighborhood when he was a kid. Fair enough. Yet, in blocking any housing outside high poverty and segregated neighborhoods, the mayor says to families he, acting in his capacity as mayor, will not permit them a choice because he knows best where they must live.

The mayor rightly says that every neighborhood, including historic neighborhoods of color, should be a great place to live. Everyone should support that. Unfortunately, Houston has a long way to get there. Next week, Mayor Turner is expected to announce his plan to reinvest in Houston’s historic minority neighborhoods. This is vitally important. It is also a civil rights issue.

It will be interesting to learn from the mayor how much of the hundreds of millions in needed public investment he is prepared to provide to overcome the historic disinvestment of minority communities by his predecessors. What is required is a major commitment of public funds – not another study, more plans and empty promises. Absent this type of massive commitment, historic African-American neighborhoods will never be “communities of choice” for many families. And even if the mayor can deliver the necessary hundreds of millions of dollars to equalize public infrastructure and investment, the communities where all the city’s public housing is now located will not be transformed for many years. In the meantime, Mayor Turner has no right to use the power of his office to force people to remain segregated until that day comes.

There is something deeply troubling about the mayor’s resistance to taking a first step toward housing choice and integration of government-subsidized housing. It will take more than Mayor Turner’s stubborn beliefs, born of his negative experience in high school with school bussing, to make his policy of “compulsory racial and economic housing segregation” in government-subsidized housing into equality.

The mayor’s actions are immoral and under the Civil Rights Act, his actions on behalf of the City of Houston are unlawful.