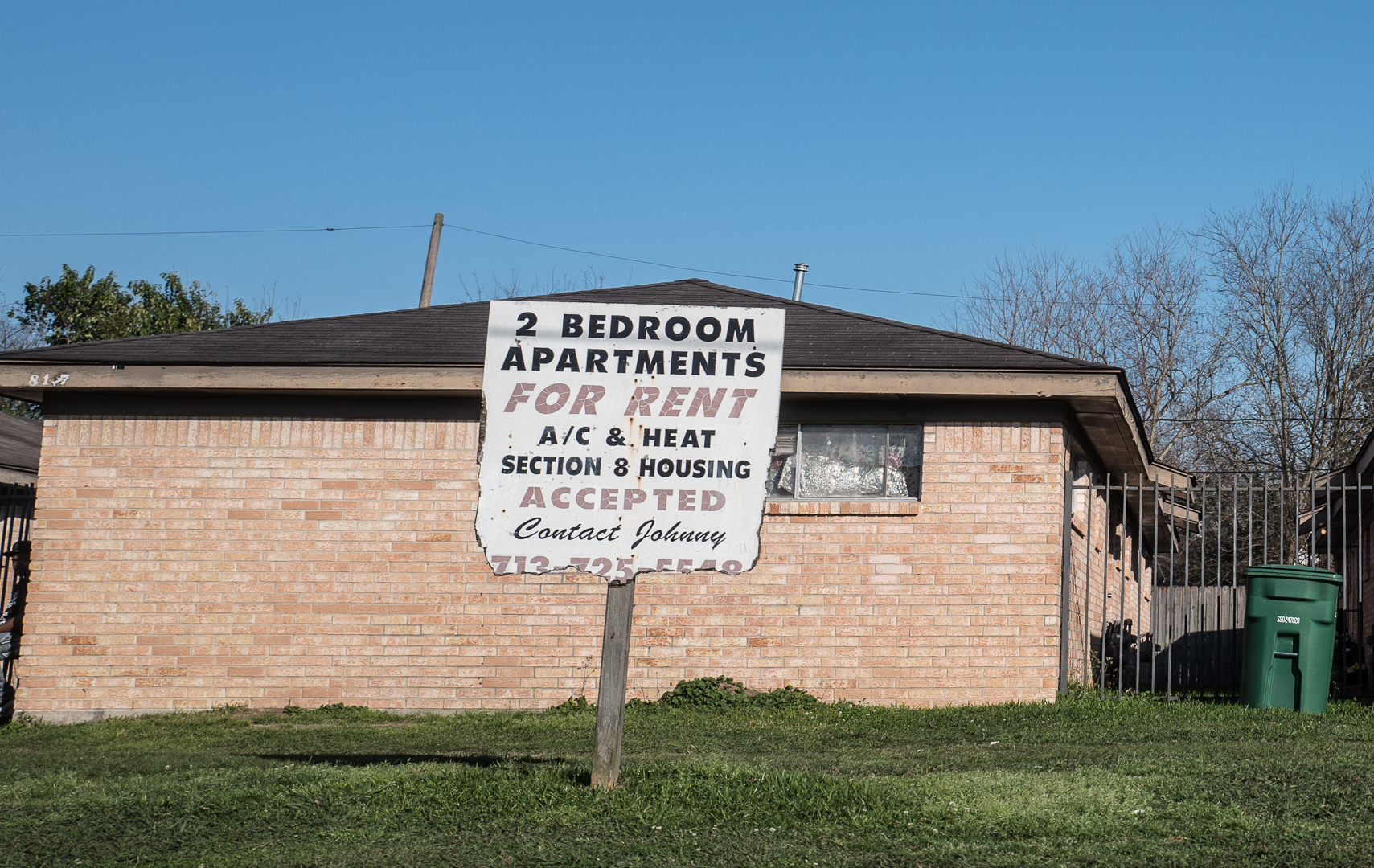 In Texas, there is a law formally protecting landlord discrimination against people with housing vouchers, most of whom are African-American.

A lawsuit filed Thursday in the United States District Court, Northern District of Texas seeks to overturn that 2015 Texas state statute passed at the behest of the Texas Apartment Association.

The suit was brought by the Inclusive Communities Project (ICP) of Dallas against Texas Governor Greg Abbott.

A copy of the pleadings is attached at the bottom of this post.

In the following description, I liberally paraphrase from portions of the pleadings.

ICP is a Dallas-based nonprofit organization organized to work for the creation and maintenance of thriving racially and economically inclusive communities, the expansion of fair and affordable housing opportunities for low income families, and redress for policies and practices that perpetuate the harmful effects of discrimination and segregation.

ICP has a special interest in voucher holders not being discriminated against and segregated in distressed neighborhoods.

ICP’s mobility counseling and financial support for its Dallas Housing Authority (DHA) voucher clients is part of the remedy in another federal court ruling, the Walker v. HUD public housing desegregation case. The U.S. Court of Appeals for the Fifth Circuit recommended a desegregation plan to remedy the intentional segregation of public housing and Section 8 vouchers by the Federal government, the City of Dallas, and the Dallas Housing Authority. The plan included a housing voucher mobility program. The Fifth Circuit held that this remedy should include more vouchers and a vigorous mobility program that served the black voucher households wishing to move out of the segregated areas.

ABOUT THE SECTION 8 PROGRAM

The Section 8 Housing Choice Voucher program is publicly known to be predominantly comprised of African-American recipients. For example, approximately 86 percent of DHA voucher participants are African-American.

The households participating in the voucher program are subjected to various negative racial stereotypes. One example of the stereotyped perception is the infamous and widely reported 2015 incident involving black guests at a McKinney neighborhood pool. White residents taunted the African-Americans as being “Section 8.”

HOW A TEXAS LAW MAKING DISCRIMINATION LEGAL CAME ABOUT

On December 11, 2014 the City of Austin amended its Fair Housing Ordinance to protect voucher holders from discrimination in the rental or sale of housing. The stated purpose was to provide a remedy for the concentration of voucher households in only a few parts of the City. The unwillingness of landlords to rent to voucher holders was cited as a cause of the concentration. When the Austin City Council directed its City Manager to prepare the ordinance, it specifically did so as part of the City’s federal obligation to affirmatively further fair housing.

The Austin ordinance amended the City’s fair housing code to prohibit landlords from refusing to rent to prospective tenants on the basis of “source of income,” which was defined to include “housing vouchers and other subsidies provided by government or non-governmental entities.” Thus, under Austin’s ordinance, if a person was otherwise qualified to rent a property, the landlord could not reject that person because part of that person’s rent would be paid with a Housing Choice Voucher.

The Austin prohibition against voucher discrimination does not prevent a landlord from:

The day after the ordinance was adopted, the  Austin Apartment Association filed a lawsuit challenging it. A week later, SB 267, the bill that became Tex. Local Gov’t Code § 250.007 overturning the City’s power to pass the ordinance, was filed for consideration in the January 2015 Texas legislative session.

“Except as provided by this section, a municipality or county may not adopt or enforce an ordinance or regulation that prohibits an owner, lessee, sublessee, assignee, managing agent, or other person having the right to lease, sublease, or rent a housing accommodation from refusing to lease or rent the housing accommodation to a person because the person’s lawful source of income to pay rent includes funding from a federal housing assistance program.” – Tex. Local Gov’t Code § 250.007.

HOW THE STATUTE MAKES SEGREGATION LEGAL

By permitting multifamily landlords in white areas to discriminate solely on the basis of participation in the voucher program, the Texas Statute excludes predominantly black voucher households from white areas. The Statute segregates those households into minority concentrated areas that are marked by conditions unequal to the conditions in the areas from which they are excluded.

WHY THE TEXAS STATUTE IS UNCONSTITUTIONAL

ICP states that the Statute has the intent and the effect of perpetuating racial segregation.

ICP claims the intent of the State is to single out a racially identifiable black group – voucher holders – for injury. The intent is proven by the circumstances giving rise to the Statute and the stark pattern of the consequences of the Statute.

The Statute outlaws municipal protection for only one group and that group – voucher holders – is predominantly black.

Significantly, the Statute does not prohibit cities the power to offer protection for various groups that are not racially identifiable. Texas cities have passed ordinances that include other protections not found in the Fair Housing Act. For example, from 1982 through 2004 the City of Austin prohibits landlords from discriminating on the basis of student status, marital status, sexual orientation, gender identity, and age. The Texas Legislature took no action to outlaw these changes.

The policy set out in the Statute causes two discriminatory effects.

The policy in the Statute is an artificial, arbitrary and unnecessary barrier to integrated housing that is not necessary to achieve any legitimate government interests.

The Statute permits multifamily landlords to deny housing to voucher families who can pay the rent, satisfy the tenant selection criteria, and for whom there are no legitimate business reasons not to accept as tenants. ICP points in detail to its practice of providing extra security deposits to Section 8 landlords renting to its clients, as well as a host of other protections.

Further, any substantial, legitimate, nondiscriminatory interests of landlords the Statute purports protect could be served by other practices that have a less discriminatory effect.

The Texas Legislature claimed the Statute protects the interest of landlords based on the fact the federal government does not make participation in the voucher program mandatory. ICP points out the facts do not support this claim however. HUD is the federal agency in charge of administering and interpreting the federal housing voucher program. 42 U.S.C. § 1437f(o). HUD enacted a regulation that expressly provides that nothing in the voucher program regulatory scheme was intended “to pre-empt operation of State and local laws that prohibit discrimination against a Section 8 voucher-holder because of status as a Section 8 voucher-holder.” 24 C.F.R. § 982.53(d).

In fact, protections such as those provided in the Austin ordnance do not intrude on the legitimate business interests of landlords:

The creation of racially integrated housing opportunities and the elimination of racial segregation are purposes of the Fair Housing Act.

The State of Texas has accepted hundreds of millions of dollars in federal Community Development Block Grant funding from the U.S. Department of Housing and Urban Development. In order to receive these funds, State officials certify that the State will affirmatively further fair housing in its housing and urban development related activities. This obligation requires the State to, at a minimum, have an institutionalized method to determine whether its housing and urban development related actions are perpetuating racial segregation.

The State has forbidden landlord discrimination against voucher households when necessary to affirmatively further fair housing. In order to continue to receive federal CDBG funding for disaster recovery, the State of Texas imposed the obligation on subrecipients of CDBG funds to require all owners of affordable multifamily rental housing units and owners of 20 or more single family or duplex private rental housing units receiving federal assistance under the Hurricane Relief Program to accept vouchers. The purpose of the requirement was to affirmatively further fair housing pursuant to a fair housing compliance agreement between the State and HUD.