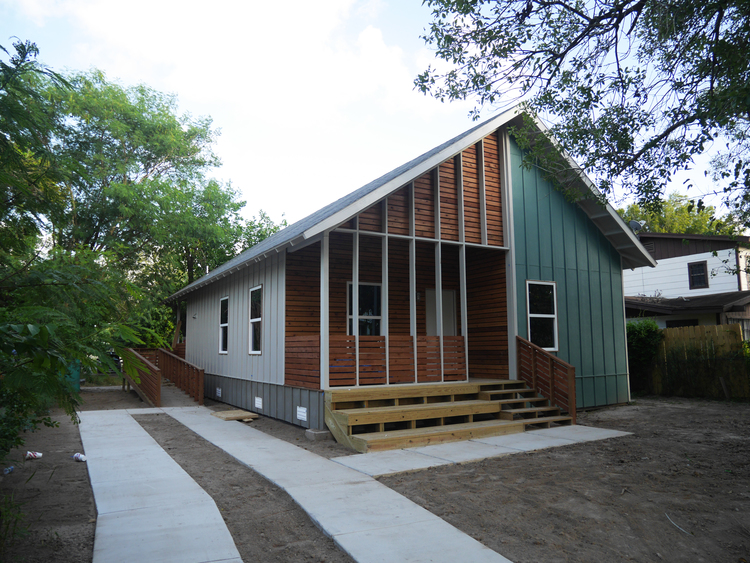 Update 5/8: SB 1673 by Sen. Eddie Lucio, Jr. has passed the Texas Senate by a vote of 29 to 2, putting the RAPIDO model for disaster recovery housing one step closer to access for communities across the state. The bill will now be sent to the House of Representatives, where in 2015 a very similar bill by Sen. Lucio did not receive a vote before the crowded end-of-session deadline despite broad bipartisan support.

RAPIDO has been recognized as an innovative way to prepare for disasters and rebuild homes quickly and efficiently, winning plaudits from SXSW, the Smithsonian and others. The State of Louisiana is now considering adopting the model as it recovers from last year’s flooding.

But although RAPIDO was developed by a partnership of Texans including Texas Housers,
buildingcommunityWORKSHOP [bc], Community Development Corporation of Brownsville (CDCB), the Hazard Reduction and Recovery Center at Texas A&M (HRRC), La Unión del Pueblo Entero (LUPE) and A Resource In Serving Equality (ARISE), with the support of the Texas General Land Office (GLO), it has not yet been fully embraced by our state.

SB 1673 expands on the RAPIDO demonstration program carried out by our partners in Brownsville in 2014. It designates the GLO (or another state agency if the governor chooses) to coordinate disaster preparedness.

Local jurisdictions could then voluntarily enter a process that would begin by developing a customized housing “precovery” plan with the experts at Texas A&M. Once the state approved the plan, it would assist with “pre-procurement,” putting the federal permits and payment structures in place prior to a disaster so that recovery work could begin immediately. Recovery would be based on RAPIDO’s signature temporary-to-permanent core housing model (pictured at top), with input from local stakeholders and a participatory design process that included the displaced households who could move into the new homes in a manner of weeks.

(For more information on the RAPIDO model, please see the program report put together by our partners or this brief video.)

At the committee hearing, Sen. Lucio said that his bill was borne out frustration from “the slow response to bring our citizens back home and the inefficiency of government” after Hurricanes Rita, Ike, Dolly and other recent disasters. In each instance, complicated state and federal processes kept communities from recovering for years after the disaster struck – delays that continue today in some cases. The recovery process seemed to start from scratch each time, rather than build on past experiences.

Sen. Lucio said that one of the most important lessons learned from RAPIDO is, “Don’t wait until you have a fire to designate a firefighter.”

Dr. Shannon Van Zandt of the HRRC at Texas A&M (and the Texas Housers board) spoke before the committee about her role as a partner in the RAPIDO process, analyzing the main obstacles to a speedy recovery. She said that SB 1673 was designed to overcome the four main problems with past recovery efforts:  The difficulty of making good decisions quickly in a crisis, the lack of local capacity, the challenges of navigating the labyrinth of bureaucracy around funding and assistance and the narrow window of opportunity where the most aid is available. “What we determined is the key to addressing these priorities is pre-recovery planning,” she said.

Van Zandt added to local jurisdictions choosing to enter the precovery process would also be able to identify the areas most vulnerable to disasters, which are often low income communities, as affordable housing is often located in low-lying areas and low income families are less likely to have good insurance or savings to recover without public aid. Pre-planning includes mitigation efforts for these areas, such as improving building codes for structures in harm’s way, and determines the top local recovery priorities.

“They would understand what their vulnerabilities were so they could react immediately” after disasters, Van Zandt said. Working with her team at A&M would give local officials access to the accurate data and analysis necessary to develop effective precovery strategies.

Texas Housers co-director John Henneberger also spoke in favor of SB 1673, reminding the committee members – who have extensively studied RAPIDO since the 2015 legislative session – about the model’s effective construction and significant cost savings. A RAPIDO home can be built for less than $80,000 in just a few weeks, while units built in recent drawn-out recoveries have cost up to $125,000 each.