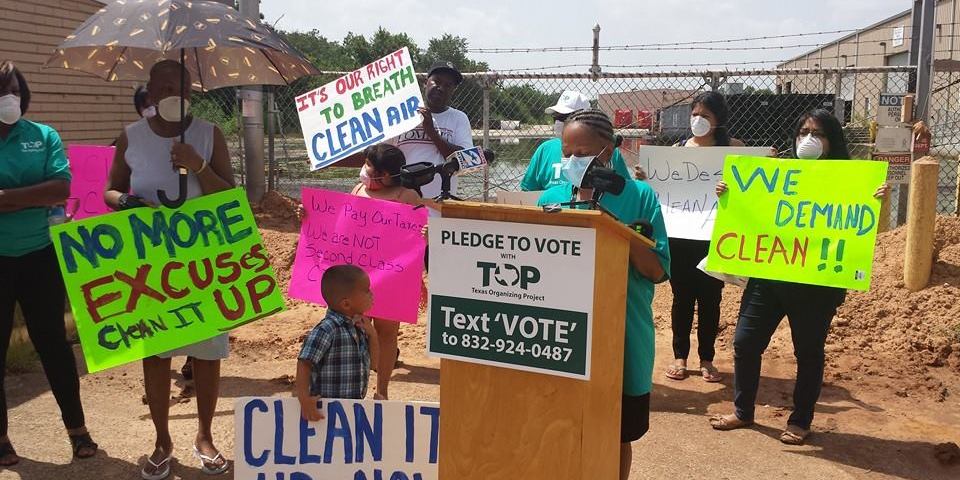 [The following is adapted from a presentation to the National Fair Housing Alliance‘s national conference on June 27, 2016.]

Where you live matters. Your neighborhood seriously impacts your health, education, lifetime earnings, safety and much more. This is especially true if you are a low income person of color.

One aspect that adds to the inequalities of place is perhaps not discussed as often as it should be in the context of fair housing: Environmental injustice.

Those who live in racially segregated, high poverty areas are adversely affected by place by bearing a disproportionate burden of environmental hazards due to longstanding discrimination. Toxic sites like chemical refineries, garbage dumps, brownfields and others were often intentionally sited in minority neighborhoods during the era of redlining, and unfortunately that pattern often continues to this day.

The research is clear: People living near environmental hazards experience worse health outcomes than those that don’t. Studies have shown that living near hazardous waste sites can increase the risk for central nervous system birth defects, congenital heart defects and low birth weight in pregnant mothers. Living near highways and high-traffic areas is linked to increased asthma hospitalizations. Living near industrial sites puts families at risk of cancer.

Pollution from industry and highways can also be carried indoors, as industrial and traffic pollutants have been found in higher concentrations in low-income, minority households than more affluent households. Since the 1980s, researchers have shown that race is the best predictor for the location of hazardous waste facilities in the United States.

To assess these problems in communities, we examine a few key sources: Point source pollutants such as Superfund sites, landfills, sites treating, storing or disposing of hazardous substances and other sites that can emit pollutants into the air, water and soil. Highways are a more diffuse source of pollutants that should also be considered.

Environmental injustice can manifest from even more diffuse environmental problems such as the risk of flooding and lack of drainage. Communities of color are sometimes located in floodplains because market rate housing is typically more affordable in these areas. This problem is exacerbated by lower-quality infrastructure, leaving communities more vulnerable to natural disasters such as hurricanes and floods. Southern coastal communities are also at higher risk of communicable diseases as a result of standing water, a timely consideration as Texas communities prepare for a possible outbreak of the Zika virus.

Neighborhoods with these environmental hazards in their community, if left unmitigated, will likely remain lower income, more racially segregated neighborhoods. Point source pollution, floodplains and lack of proper infrastructure keeps these communities poor by discouraging private investment and stifling property values of residents who have invested in the community. Therefore, the racial wealth gap produced by neighborhood segregation is not only a housing issue; it’s also an environmental issue.

We, as a fair housing organization, have embraced the environmental justice movement because our community partners struggle with the effects of environmental hazards. We provide technical assistance to communities who are fighting for better housing, infrastructure and neighborhood conditions. We operate under the notion that these communities were deliberately segregated through racist public policies and are still dealing with the effects of segregation today.

For the past few years, we have been working directly with an organization of low income community leaders in Houston. They see the inequalities of place on the ground, and they have identified four essential fair housing and neighborhood rights that are necessary to combat the effects of segregation: The right to choose where to live, the right to stay in your home, the right to equal treatment for your neighborhood and the right to have a say in decisions that affect your community.

By advocating for these four rights, community members are trying to reverse the policies that isolated and harmed their neighborhoods. Environmental justice falls under the right to equal treatment, as African-American and Hispanic neighborhoods in Houston must deal with far more dangerous environmental conditions than the city’s more affluent, whiter areas.

The environmental health hazards are pretty stark for communities in Houston. Hazardous, locally unwanted land uses are disproportionately in or near majority-minority neighborhoods when compared to majority-white neighborhoods.

This racial dot map shows Houston’s population by race, with white population in blue, African Americans in green, Hispanics in orange and Asians in red. The white population largely mirrors the grey outline that indicates the strongest markets according to a recent housing market study performed for the City of Houston. Environmental hazards are noticeably absent from much of this area.

Even publicly-owned toxic sites, both current and historical, are disproportionately placed in majority-minority communities. Census block groups where the population is at least 75 percent non-white contain 78 percent of closed landfills.

Poor drainage exacerbates flooding in already flood-prone areas and leaves poorer communities vulnerable to natural disasters. The City’s data for the level of service of each drainage ditch (a study we requested they commission) shows that 88 percent of drainage ditches are found in communities of color. Most are red, showing inadequate quality due to overgrowth, illegal dumping and new impervious cover heightening need for higher capacity drainage infrastructure:

In Houston, all these issues are exemplified by the chemical spill at CES Environmental Services. An abandoned chemical storage facility in the middle of a predominately African-American neighborhood began leaking off of the property, which already had a shaky history of neighborhood complaints and safety violations, including explosions and flash fires that killed three employees. A cocktail of heavy metals and volatile organic compounds were found on-site, and the odor left many residents complained of headaches and respiratory problems to State Health Services.

We worked with neighborhood leaders (pictured at top) to inform the community of their opportunities to make their voices heard in permit processes for informing the public how the City’s hazardous enterprises permit process works, how to participate and how to obtain information about hazardous enterprises. In the end, residents around CES were just happy the odors were taken care of once the federal and state governments began cleaning up the site to accommodate non-residential use.

But a preventative solution is the ideal way to deal with these problems that are so prevalent. Since Houston does not have zoning and minority communities are less likely to have deed restrictions to hazardous land uses from entering their community, we have looked for other ways to be proactive, such as a citywide environmental justice ordinance. But due to Texas court case precedent, we are still coming up short.

Our community partners in the colonias of the Rio Grande Valley are also fighting to reduce environmental injustice. These unincorporated, impoverished communities along the border face critical housing and infrastructural deficiencies, including a lack of basic drainage systems. They are also often victim to discriminatory siting of toxic hazards.

Two major environmental problems plague the colonias at this time. For decades, the area’s Donna Lake has been contaminated with PCBs, which increases the risk of cancer if you eat the fish due to the chemicals building up in fish tissues. The EPA is only now reinvestigating the cause, but doing nothing to prevent people from eating the fish in the meantime.

Teens are at the forefront of the environmental justice movement in the colonias. They’ve toured the treatment plant, recorded its effects on the neighborhood and recently convinced the City of Alamo to invest $1.7 million in better aeration techniques to reduce the smell.

So how can we use fair housing law to help these communities fight for environmental justice?

To do this, HUD provides an environmental health index through the AFFH online tool, which summarizes possible exposure to harmful air toxins at a neighborhood level. The higher the number, the better environmental quality in the neighborhood. However, this metric only takes into account air pollution data that was collected by the EPA in 2005. HUD also acknowledges the fact that these data often do not show a definable difference between neighborhoods but rather differences across the region, since the air pollution data will pick up vehicle emissions and other point source pollutants. The environmental health index would lend itself better to a regional analysis.

HUD encourages jurisdictions to use local data to assess other indicators of environmental health, but they are not required. We urge jurisdictions and PHAs to incorporate data on point source pollutants, highways and vulnerability to flooding and other natural disasters – and how these metrics may be disproportionately sited near protected classes, especially low income communities and communities of color. Although the environmental health index does pick up air pollutants from some hazardous sites and roads, they do not take into consider the level of danger living next a potential chemical spill, gas flare, or site leeching contaminants into the water and soil. The rule also states that environmental health hazards outside of jurisdiction boundaries can be addressed and evaluated.

The following data variables should be considered for local knowledge:

In some cases, it may be necessary to work with your local government to get them to produce data necessary for you to analyze, as was the case with Houston’s drainage ditch level of service data. But it’s worth it. In order to fully address the fair housing issues in your community, you must have the proper data to show the issues.

The tools to fight environmental injustice are there if we partner with communities to use them. We must take seriously the effect of environmental hazards on creating segregated, unequal places for low income people of color. Each community deserves the right to equal treatment, and fair housing advocates have a responsibility to help make sure each community is a safe, healthy place to live.