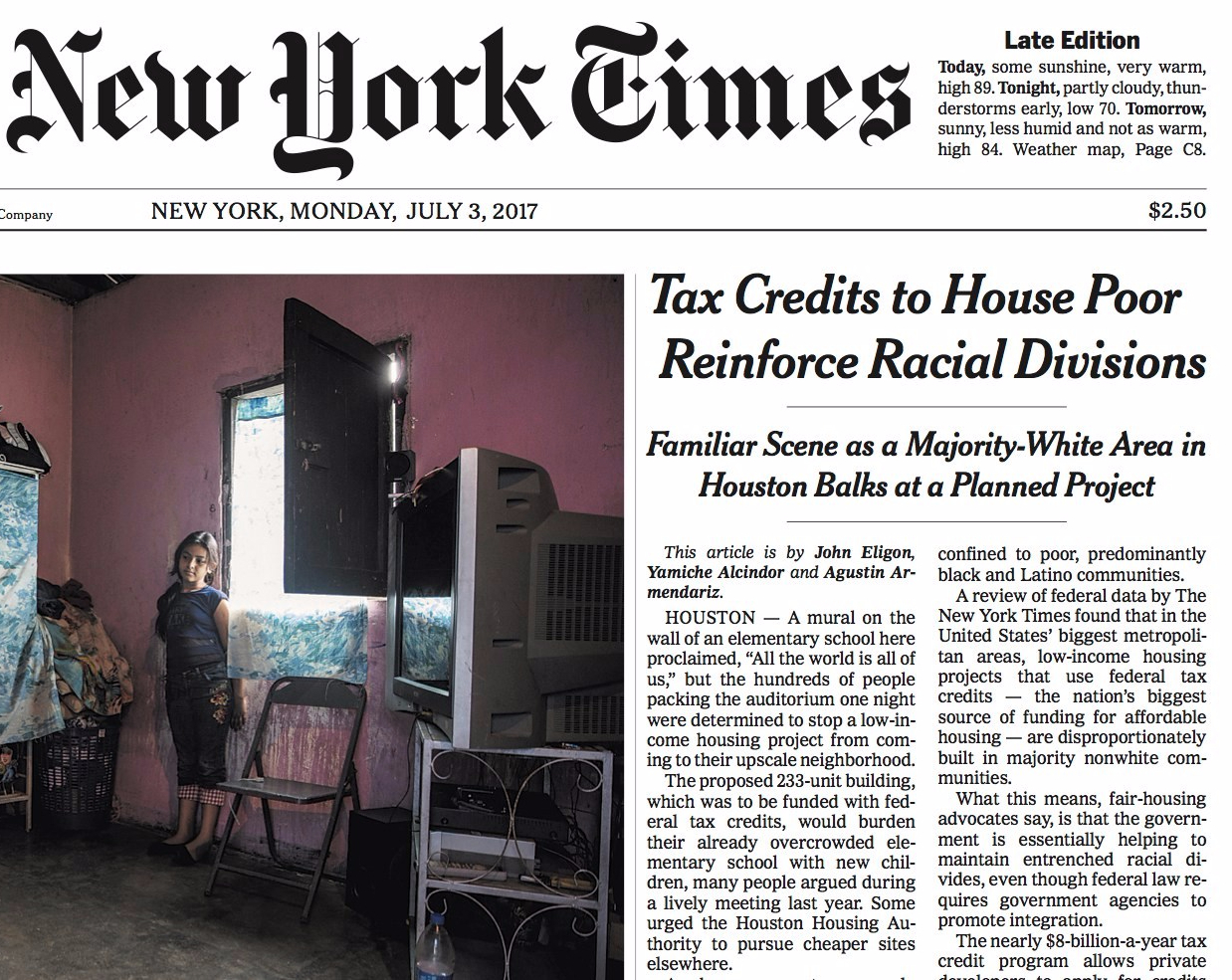 No politician has the right to tell families where to live – especially not because of their race or income. Doing so violates freedom of choice and our most fundamental civil rights laws.

Yet as a powerful new story in the New York Times illustrates, housing choice is severely limited for low income Houstonians of color due to a pattern of government-subsidized segregation that is largely unchanged since the days of Jim Crow and perpetuated by the city’s current leadership.

The Times story begins with our Houston co-director Chrishelle Palay speaking before a large, angry crowd at a public meeting on the Fountain View Apartments, Houston’s first proposed mixed-income public housing development in any affluent, majority-white neighborhood. Mayor Sylvester Turner and the members of the Houston City Council succumbed to anti-housing bias in the community and blocked the project from moving forward, without any equivalent new development in its place. They became the latest in a long line of Houston elected officials who use their power to force people to live in racially segregated neighborhoods.

The segregation of government-subsidized housing is not unique to Houston. As the Times found in a study of the country’s largest metropolitan areas, “low-income housing projects that use federal tax credits – the nation’s biggest source of funding for affordable housing – are disproportionately built in majority nonwhite communities.” They also reference our own recent study on how Texas has actually made some improvements to its allocation of housing tax credits to reduce segregation.

But the actions by Houston’s leaders were so blatant as to spur a federal fair housing investigation, which earlier this year found that the City’s housing decisions violate the Civil Rights Act. The federal finding noted that the decision to block Fountain View “was based in part on racially motivated local opposition” and that “the City has an established pattern of failing to site or support affordable housing projects in predominantly white neighborhoods.”

These actions have dire consequences – both for the individuals who can’t choose their living environment and for the neighborhoods where the overcrowding of subsidized housing concentrates families in poverty and restricts access to services, jobs and high-performing schools.

Building affordable housing in every part of Houston, especially in the affluent and majority-white areas where it has been excluded due to intentional government action, does not somehow force residents to move, as the mayor claims. It does not take away from historic minority neighborhoods, which already have the bulk of subsidized housing and are in need of true public investment in infrastructure, education and safety. Gustavo Velasquez, the former HUD assistant secretary for fair housing (and recipient of our 2015 Texas Houser Award), told the Times that the mayor’s argument against creating more diverse housing options “is the same thing we have been hearing for years, if not decades.”

Spreading the government’s investment in affordable housing across all neighborhoods would provide residents with real options – to live near jobs, or well-resourced schools, or services and amenities – that scarcely exist due to decisions by politicians who think they know best where people should live. People such as Katrina Rhodes, who told the Times that she would love the option to live somewhere safer, where her 9-year-old daughter doesn’t need to walk more than a mile to get to school.

“If there was an opportunity for me to move over there, guess what: I would go,” she said of the blocked Fountain View project.

Mayor Turner has spent the past several months deliberately obscuring the problem of segregation. He refuses to comply with the civil rights order. He says that we should be working to make every neighborhood a neighborhood of opportunity, and that’s true – but it cannot be an excuse for continuing to deny residents like Katrina their essential right to choose to live outside an impoverished and segregated neighborhood if they decide that’s best for their families.

After decades of government-approved segregation and disinvestment, Houston has a long way to go before all neighborhoods are treated equally. A critical first step is to promote fair and affordable housing across the city. After sweeping investigations by the federal government and now the country’s preeminent news organization, will city leaders finally get the message and comply with the law?